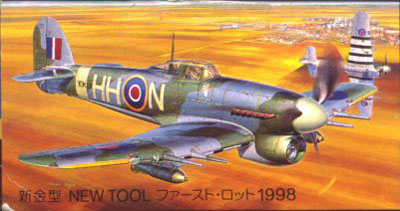 As his Hurricane was entering service as the RAF's first modern monoplane multi-gun fighter, legendary Hawker Aircraft designer Sir Sydney Camm was already hard at work on the design of what he hoped would be the Hurricane’s successor. This aircraft continued the emotive weather tone of Fury and Hurricane with the name of Typhoon. This massive new fighter; the heaviest, most powerful singer-seat single-engined warplane ever created at the time of its design, was to be pressed into operational service before it was fully developed. In consequence, it would gain a worse reputation among its pilots than any fighter preceding it in RAF service. It was fated to be rarely employed in the interceptor role for which it was originally designed. Despite these setbacks, it finally blossomed into one of the most formidable weapons evolved during the Second World War: a close-support fighter that would turn the scales in many land battles and upset many conceptions of land warfare.

As the first single-engine fighter designed from the outset to carry four 20mm cannon as its main armament, the Typhoon was over-built, with a wing that likely could have carried 40mm weapons successfully. This thick wing would prevent the design achieving its true aerodynamic potential until it was redesigned and became the Tempest, the best RAF air superiority fighter of the war. It was also saddled 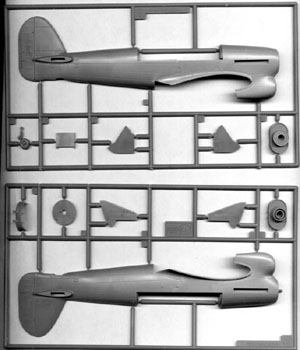 with an untested engine, the 24-cylinder, 2,000 h.p. Napier Sabre, an engine that had the unfortunate reputation of frequently bursting into fire on starting, and which filled the cockpit with exhaust gases to the point a pilot had to go on oxygen as soon as he closed the canopy. Not only that, but the airplane also shed its tail feathers in dives, due to harmonic vibration in the airframe at certain engine speeds, which was only solved by bolting fishplates around the end of the fuselage to keep things together.

Nevertheless, the Typhoon, introduced into combat in late 1942, was successful at catching Focke-Wulf Fw-190 fighter-bombers on their tip-and-run raids due to its high speed at low level. Armed with two 250-lb. bombs, the "bomb-phoon" established a reputation for itself as a potent fighter-bomber. By the time of the Normandy invasion, the Typhoon was carrying eight rockets, giving it firepower equal to the broadside of a light cruiser, which it used to deadly effect against German armor in the Falaise Gap. Flying over the battlefield in "cab-rank," waiting to be called on any target ahead of the advancing armies, the Typhoon ended the war as the infantryman's friend.

For the past 30 years, the only 1/48 model of this significant airplane was from Monogram. While thoroughly state-of-the-art at the time of its introduction, that model has been decidedly long in the tooth for at least the past 15 years. Hasegawa's 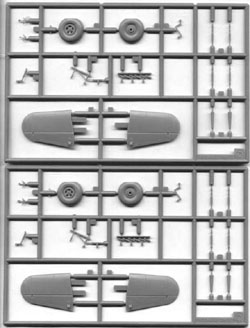 Typhoon is the early "car-door" variety. Heretofore, the only way a modeler could create this version was with an early resin conversion from Missing Link Models, or in the past year with a very nice conversion set from KMC that was three times the cost of the kit it was meant to modify! This new Typhoon is thoroughly state of the art and while it may cost five times as much as the earlier Monogram kit, the modeler will not have to buy KMC's cockpit update in order to end up with a very acceptable Tiffy on the shelf.

The kit-supplied cockpit is at least as detailed as the Hurricane's, which was more than acceptable to this reviewer when it came out last year.

It's easy to see that the "bubble-top" Typhoon will not be far down the road. The fuselage is engineered with the upper center section separate, which will make creating the other cockpit easy. Additionally, a quick look at the lower wing panel reveals all the holes for mounting the eight rocket rails, just waiting to be drilled out. 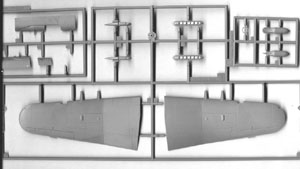 So far as the canopy is concerned, it is as clear and crisp as we have come to expect from Hasegawa, and offers the option of either an open or closed cockpit, with the "car door" molded separately in clear plastic. The canopy blister that fitted over the rear view mirror on some Typhoons is also provided.

The kit offers a choice of either the early fishtail exhausts or the later covered exhausts.

The decals are the right colors, and offer two marking options: 175 and 198 Squadrons, in correct-shade Sky. Those who shy away from painting ID stripes will like the fact that Hasegawa has provided the black stripes for the underwing ID markings. Personally, this reviewer picked up Aeromaster's "Storms in the Sky Part IX" as soon as this kit was announced, in anticipation of doing Squadron Leader Dennis Crowley-Milling's Typhoon from 181 Squadron. Aeromaster has done several car-door Typhoons in their "Storms" series, so modelers have a wealth of marking alternatives already waiting for them with this kit.

Overall, this looks to be another winner from the brothers Hasegawa, a truly definitive model of a significant airplane, further proof that we are indeed living in the Golden Age of Modeling. And it's in the Scale of the Big Powerful Gods, to boot!!