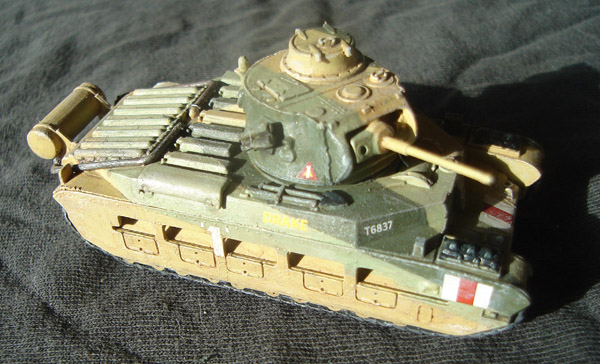 Deep in the recesses of my mind there is a memory of an older friend showing me all of his tank models before we started throwing marbles at them. One of these was a cute little thing that just exuded so much charm that I knew I had to have it. . so after a trade of many comic books, I had my first Airfix 1/76 Matilda. This was around 1974 or so and before I started to build models. Eventually around 1980 I built two of the 1/35 Tamiya kits and my Matilda jones was assuaged for the time being. 15 years later I picked up another Tamiya kit and built it. .. built it that is - it still awaits finishing. Earlier this year I ordered the 1/76 scale Airfix kit and recently built that while waiting for rounds of World of Tanks to load.
The Matilda. .. or A.12 aka the Infantry Tank Mk.II, was designed as an infantry support tank, and as such it featured very heavy armour (for the time) which was impervious to almost all the guns then in use. A handful of them were used by the BEF in France in 1940, but it found its true fame in the Western Desert where it outclassed all the Italian and early tanks used by the Afrika Korps. When the Panzer Mk.III and IV were introduced it began to see its days numbered because, although its armour was still good, it only mounted a 2pdr which was unable to damage them at anything but close range.
Withdrawn from the desert, the Matilda then served in the Pacific with the Australians who made excellent use of it - in fact it remained in Australian use into the 1950s. One myth that has arisen over the years has to do with the name 'Matilda'. According to this, the name was given because from the side the Matilda looked like a cartoon duck named Matilda that was popular in the 1930s. However it actually arose from the previous Infantry Tank Mk.I - the A.11 - that had the codename Matilda on its blueprints.
The Airfix Matilda is one of their older kits and the detail is not as good as their more recent new mold kits like the Cromwell, however it still builds into a decent little model. After cleaning up the parts I painted all the running gear and interior of the mud chutes as these would be enclosed later. The wheels were sandwiched between the outter armour plate and the hull side pieces and then these sides were glued to the bottom of the hull. the top of the hull was added and I then realized I had forgotten to put the drivers hatch cover inside, so the hull was pryed apart and the cover glued inside the upper hull and the hull was once again sealed and the engine hatch coveres added. After this the turret was then glued together as was the fuel tank.
With all the major assemblies completed, the fun part - finishing - began. The iconic finish of the Matilda is the Caunter scheme of diagonal stripes radiating out from the front and carried on the turret and decking of British vehicles in 1941. The colours of this scheme were usually light stone, silver-grey and slate. The silver-grey colour has been misinterpreted as a light blue instead of the light blue grey it actually is. This is because many years ago the IWM painted their Matilda with light blue, and if the IWM did it - it must be right. Using the AK-Interactive Caunter Scheme acrylic paints I gave the entire model a coat of light stone. I then masked and applied the silver-grey and finally the slate. It shold be noted that these are very thin paints and when brushing them on, a single coat will not give adequate coverage, however going over the area a second time moments later tends to even it out and a proper second coat will them make it very uniform. Once dry, I gave the entire model a light coat of Future and then added the decals. Once the decals were on, a wash of Rustall black and then rust was applied. Dry brushing with light grey finished it all off.
I am quite pleased with my Airfix Matilda, and the hope is it will now inspire me to finally finish the Tamiya kit I started so long ago