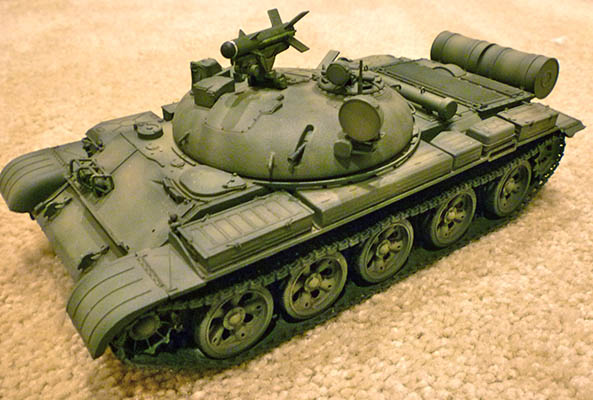 The Istrebitel' Tankov-1 (tank destroyer-1) was a Cold War equivalent of a StuG  built on a front-line chassis (the T-62 MBT) instead of one which is sliding into obsolescence. Instead of an oversized hull-mounted gun, it sports specially designed 3M7 Drakon (dragon) missile deployed from a pop-up launcher atop an otherwise normal turret. Perhaps it was spillover of the "pushbutton war" orthodoxy in both side's airforces at the time, but it does give it a unique appearance

Introduced in 1968, the IT-1 was withdrawn two years later due to two operational limitations: a large dead zone created by the missile's minimum range meant that they needed conventional tanks to protect the IT-1s. Even though the 3M7 was a folding fin missile, it was still bulky and each IT-1 only carried 12 shots, with two spares in a box behind the turret. The extra 520 kg (1144 lb) of missile guidance gear not only ate into performance but made the already cramped crew compartment doubly claustrophobic. Most IT-1s ended their life as recovery vehicles. 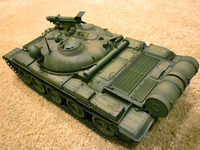 The 12-page instruction manual consists of a front cover containing general modeling guides in English and Chinese and a legend of assembly icons. The inside cover contains drawings of all the sprues (without part callouts) and a list of unused parts, while the remaining pages hold the 15 assembly steps. I found the instructions a little confusing at first, but it became clear after a bit of pondering. On reflection, it was only about as much of a jump from European instructions as it was going from Revell or Monogram's text-heavy instructions to Frog's pictographic instructions, lo these many years ago.

The assembly covers a predictable sequence: assemble the wheels, the lower hull, attach the suspension arms, followed by the wheels. The lower hull is a one-piece "bathtub" with a separate stern plate. The instructions call out which blind holes one should drill out, but the drill size is left as an exercise for the reader. Similarly, one has the option of either a smooth lower-front hull appliqué or one with what appear to be bolt-encrusted brackets. One must resort to the trusty 8-ball or Ouija board to determine which to use and why. I chose the latter because it (a) resembled the box art, and (b) is visually more interesting.

Step 4 shows an exploded schematic diagram of the track links and how they would be attached to the wheels. This was not only my first armor model since I built one at dad's knee (back when dinosaurs ruled the earth), but also my first experience with individual link tracks. So step 4a is clipping out each of about a zillion links by cutting the 4 sprue gates on each one. Step 4b consists of filing the four sprue gate nubbins on each of the afore-mentioned zillion links. Not at all challenging, but plan on a couple of evenings mindlessly clipping and tidying.

I'm grateful to fellow reviewer Eric Christianson, who let me in on the secret to assembling the links into tracks. While no doubt old-hat to you armor builders, it may be of interest to other novices like me. On a non-stick board, dry assemble enough links to go from the bottom of the first road wheel, over the top and to the bottom of the last road wheel. With this segment of track aligned against a straight-edge, add dots of Testor's liquid cement (from the black bottle) to each joint, and wait half an hour for it to partially set. Then, carefully drape the still-flexible track over the wheels, gently pushing it down to get realistic sag. Let that sit until the glue hardens. Repeat the process for the flat section of track that goes under the wheels. Repeat all of the above for the other side.

Eric had also let me in on the heretical (for an aircraft modeler) approach of assembling the entire model before painting. I must admit that it was incredibly liberating as I flew through steps 5-12, cheerfully clipping, filing and gluing my way through all of the various brackets and greeblies to the hull, along with the external fuel tanks, fenders, equipment boxes, etc. Before I knew it, I'd run out of parts! I diverged from the instructions in a couple of places: step 6 involved the ritualistic sacrifice of a tiny part (a clip that goes on a tow hook) to the carpet monster, with consequent fabrication of a replacement. (Why can't manufacturers give you a few extra of the tiny parts that you're bound to break and/or lose?)

Step 11 includes assembling the snorkel case from upper and lower tube halves, end caps and lifting brackets. The tube halves glued up to a mis-shapen mass which could have been made round given time, patience and perhaps a small lathe. I chose instead to use a length of K&S brass tubing, which looked much better. The penultimate divergence was step 12, where you are supposed to attach the piece of log before the rear fenders. Since I was going to use the build-it-all-and-then-paint technique (heresy to my airplane modeling ears) and the log would be the only piece that wouldn't be green, I elected to paint it separately and add it at the end. This was not a good choice because it ends up interfering with the fenders, and while the results don't look bad, they're not quite right either. The last place where I diverged was to add the transparent parts after everything is painted, which saved a lot of fiddly masking.

Steps 13-14 address assembling the turret. Unlike a lot of limited-run kits, where the instructions direct a part to "somewhere" on or about the vicinity of the model-to-date, these instructions left much less to the imagination. Even better, there were usually discrete dimples in the turret where the part would actually go. My only blunder with the turret was mistaking the coaxial machine gun for some sort of exhaust thingy on the back of the turret. Thinking thusly, I just glued it in, instead of painting it separately and adding it at the end.

The spotlights (shown in step 14) all consist of a front plate and a rear dome, and here I have a nit to pick: all of the plates seem about 0.5mm undersize. (Oh, and the smallest spotlight sacrificed itself to the carpet monster, but one of the "unused parts" was a good-enough replacement.

The parts fit was generally excellent, and the instructions well thought-out. Sprue gates were on the back or undersurface side of the parts, so cleanup doesn't mar the part. The down-side to this is that sometimes the gate is on the back side of a thin flange, which some could find challenging to clean up without accidentally destroying the flange. (This is especially true with the three equipment boxes in step 11.

The order of assembly makes sense throughout, though occasionally only in hindsight. When adding all of the equipment boxes, tanks, etc. to the fenders, I found I could only glue along their fronts, the rear being blocked by the hull and the sides blocked by other boxes or reinforcing gussets. At the time I thought that, were I to do it over, I'd glue all the greeblies to the fenders and then glue those as subassemblies to the hull. On reflection, however, I realized that if I did that, the greeblies would block access to gluing the fender to the hull.

Other than the tedium of prepping the track links, the kit went together speedily and the results were quite satisfying. I'd heartily recommend it as someone's first armor model. While the lack of the long gun barrel gives it the look of a "tank from the gelded age," it garners a lot of interest at shows.