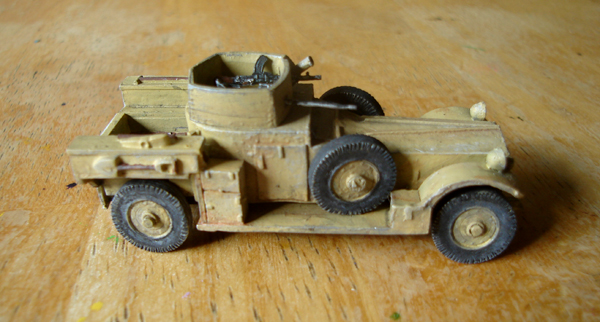 Normally car models leave me feeling blah - I can take them or leave them. . mainly leave them. However the Rolls-Royce armoured cars are just so cool looking that I knew I had to add one to my collection of 1/76 Armour. Searching ebay, I only saw two different kits in 1/76, a resin one from Milicast and a white metal from SHQ. I have built a few of the Milicast kits and while I am quite impressed by their quality, I went with the SHQ one to see what their product was like.

I ordered the kit from smallmilitarymodelsandmore and it arrived within a week securely wrapped in bubble wrap. Opening it I was presented with a hefty chunk of metal which was the body, plus separate chassis and rear box. Additional parts were six wheels, two axles, two headlights, turret, machine gun, bren gun, two sand rails, two storage lockers. I began by cleaning up the various parts in between battles in the online game 'World of Tanks'. The body was CAed to the chassis, followed by the two axles, the rear box and the two storage lockers on each side of the running boards. The headlights were added and the body was basically complete, so attention was turned to the turret.

One of the things that I really like about the Rolls-Royce was the peaked turret which housed a Vickers machine gun, however this kit represents the modified car with a Morris open-topped turret mounting two guns. This was not mentioned in the ebay listing, but a closer look at the parts photos did indeed show the open turret. At first I was tempted to scratchbuild the turret, but I decided to just built it as is for now and I can always add the turret at a later date (or get the Milicast kit). A bit of minor cleaning was required so it would fit into the well at the rear of the body. To complete the turret all that is required is to add the two guns as well as the smoke grenade launcher. One thing that is readily apparent is that the turret should be open to show the interior, however it is cast as a dish and there is just a hole that it fits into, so no interior would be visible if it was properly open - one more reason to replace it in the future.

The car was painted with AK-Interactive British light stone from their Caunter Camouflage scheme set. This is an acrylic paint that may be brushed or sprayed. When brushing it goes on very thin and at first it looks a bit streaky, but wait a few minutes and do a second coat and it smoothes out quite nicely and when dry it is nice and uniform. I was going to give this a proper Caunter scheme with the diagonal stripes radiating out from the front, but once I got the base coat of light stone on, I was so pleased with how it looked that I decided to just go with it and leave it in the single colour.

The wheels were mounted on toothpicks and first painted light stone and then I used ceramcoat black for the wheels (after a decade of the girls getting into my paints, I use what is available). These were then drybrushed with light grey and mounted on the car, leaving the two spare tyres for later - the two spare tyres have small 'nails' to affix them to the side, and I had to drill out the location for these nails so the tyres would fit. The entire model was given a wash of black from the Rustall weathering set, followed by Rustall rust and then drybrushing with some light gray. The spare tyres were added and the kit was done.

The Rolls-Royce is one of the few vehicles to serve in both World Wars and as such it has a well-deserved place on my shelf of British vehicles in desert. I originally ordered it as an exercise in seeing just what the quality of a white metal kit could be and I was pleasantly surprised. Granted it has the wrong turret, but that really is an easy enough detail to replace and I may do so in the future - although I do want one in Caunter camouflage. . so perhaps the Milicast kit, or make that long delayed switch back to 1/35 scale.