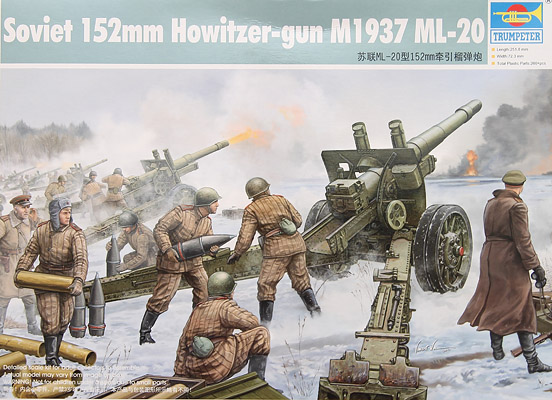 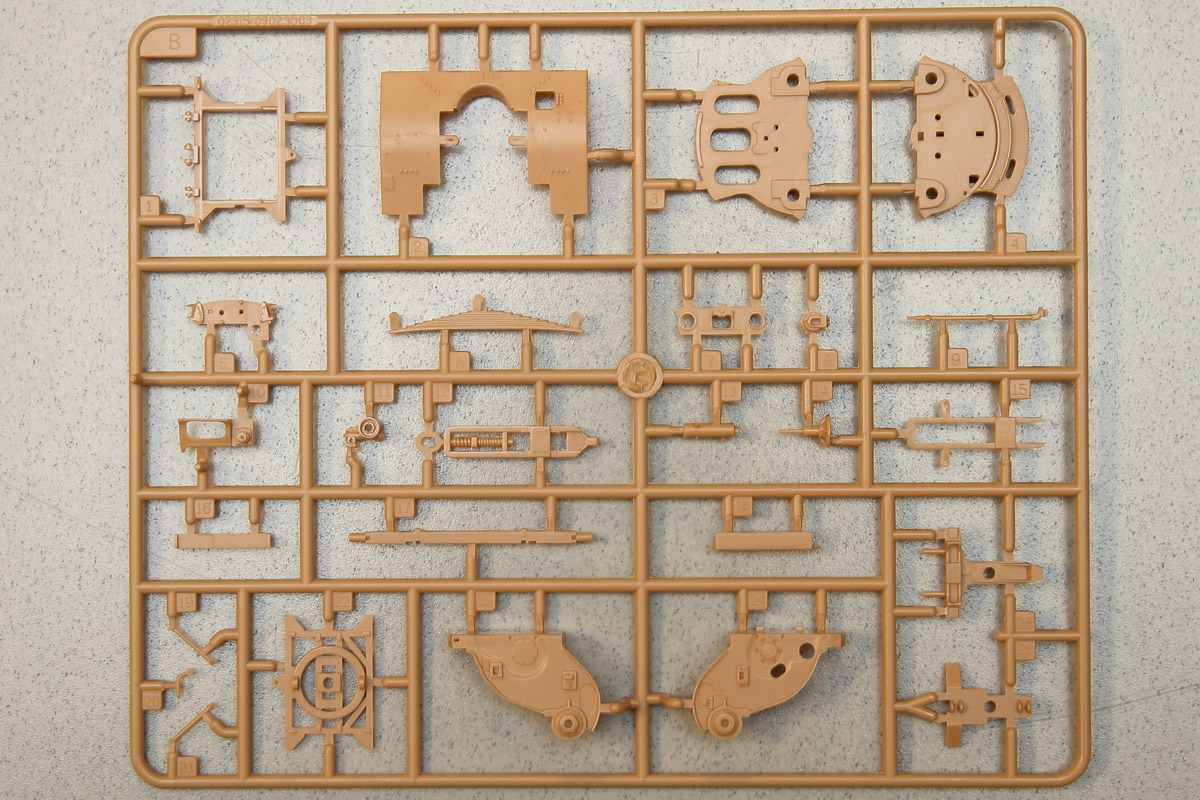 The M1937 (ML-20) was a towed howitzer in service with the Soviet Army before the start of World War II.  The M1937 was designed to replace the M1910/34 which was itself an improvement over the M1910 siege gun developed before World War I.

The ML-20 was capable of firing 3-4 rounds per minute with an experienced crew and was used extensively during the war. 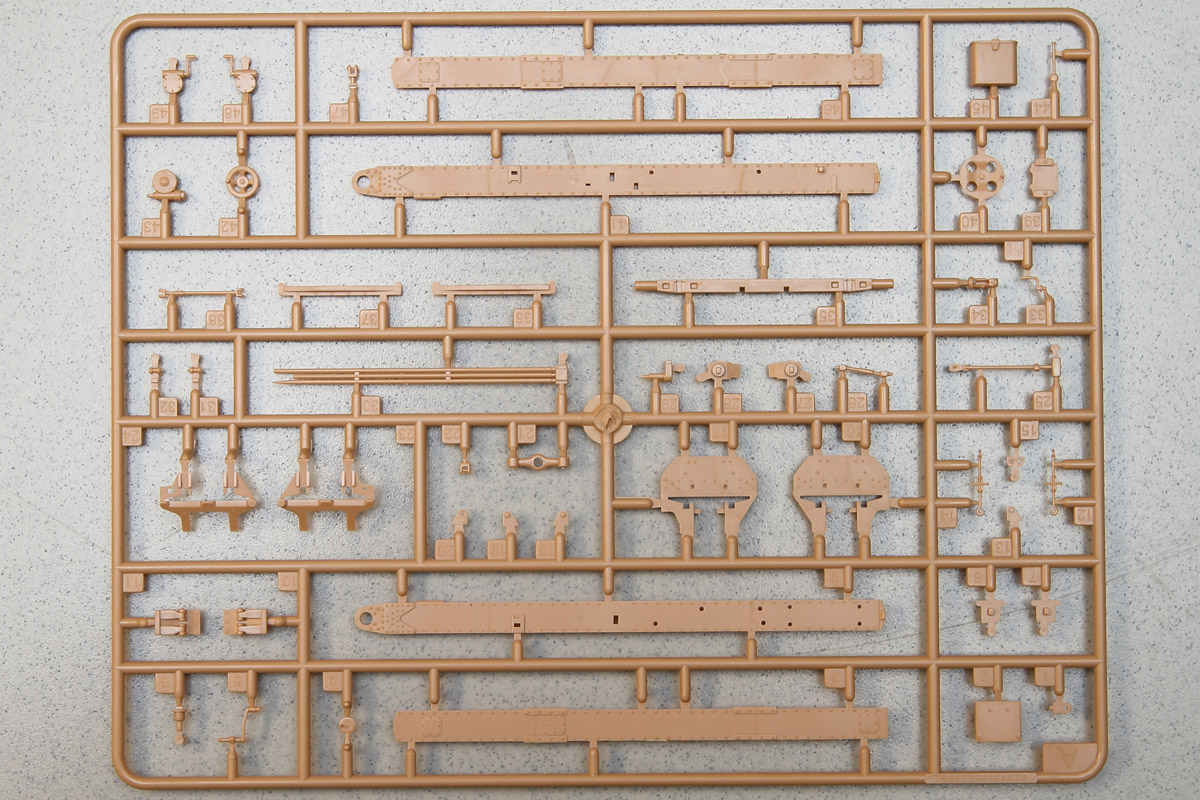 Trumpeter's M1937 Howitzer comes in a small, sturdy box containing ten separately bagged trees of beige plastic parts.  The parts are crisp and flash-free, and effort has been made to restrict the few ejector pin marks to areas that are not visible on the finished model.  The plastic is very soft and sands easily.

Also included are two sheets of photo-etch and an aluminum barrel.  The barrel lacks the slotted muzzle-brake however – a two-piece, plastic muzzle brake is included that attaches to the end.

The 12-page instruction booklet is well illustrated and easy to follow.  A separate, glossy five-view color Painting and Marking Guide is included and provides a standard color scheme of Russian Armor Green, showing the gun in its towed configuration.

A second Trumpeter color promo-sheet includes break-out images of the various features of the kit.  Two images show what would appear to be a solid, one piece muzzle brake, although the one provided in the kit is in two halves. 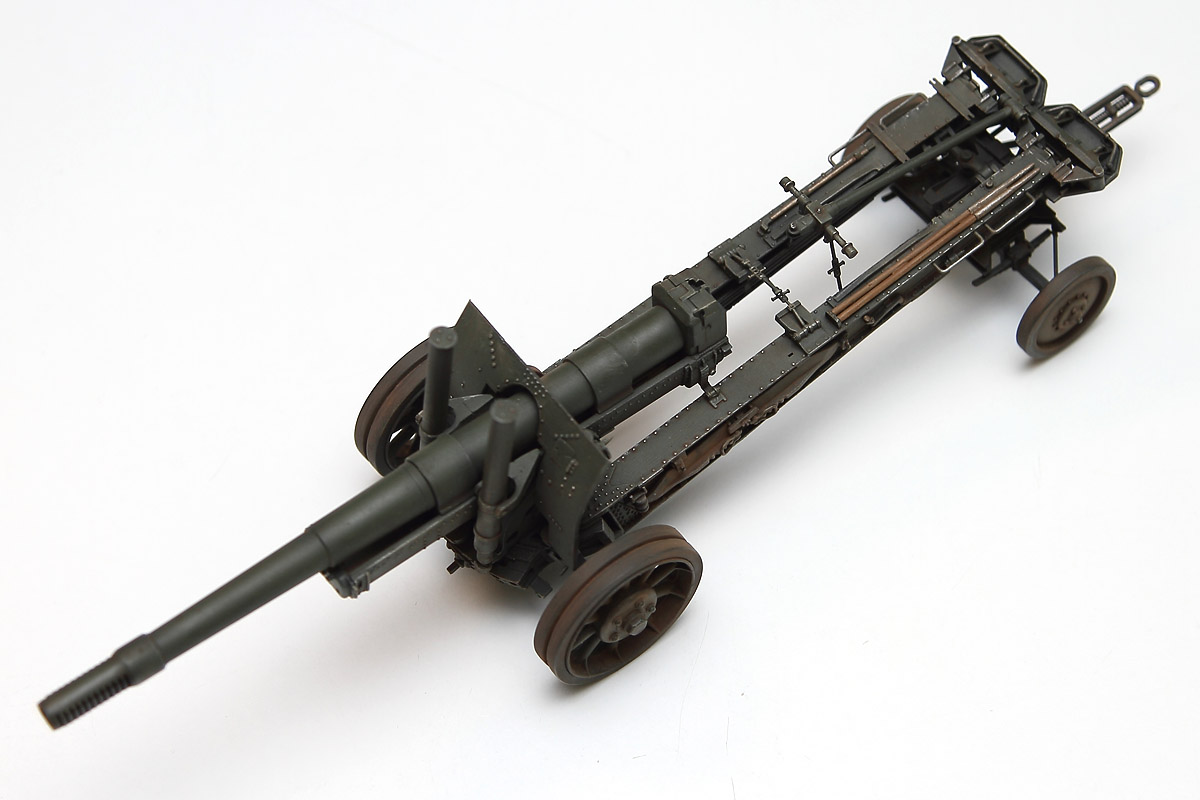 There are many delicate parts in this kit that have other parts attached to them.  In order to get everything lined up and installed right, I had to attach a few parts, wait overnight for the glue to dry rock-solid, and then attach a few more parts, etc, etc., which made for a relatively lengthy build.  I could have used super-glue, but the fit of many of these parts suffered from what I call Trumpeter’s ‘wiggle-fit’ – meaning the parts generally fit, but not securely.  There is no positive, tactile response when attaching parts; many of them lack any defined attachment points and must be nursed along as they dry in order for them to line up right.  Under such conditions, I find super-glue too unforgiving.

You will need to decide early on whether to build your howitzer in its towed configuration or as a static emplacement.  I chose the build the gun in its travel mode. 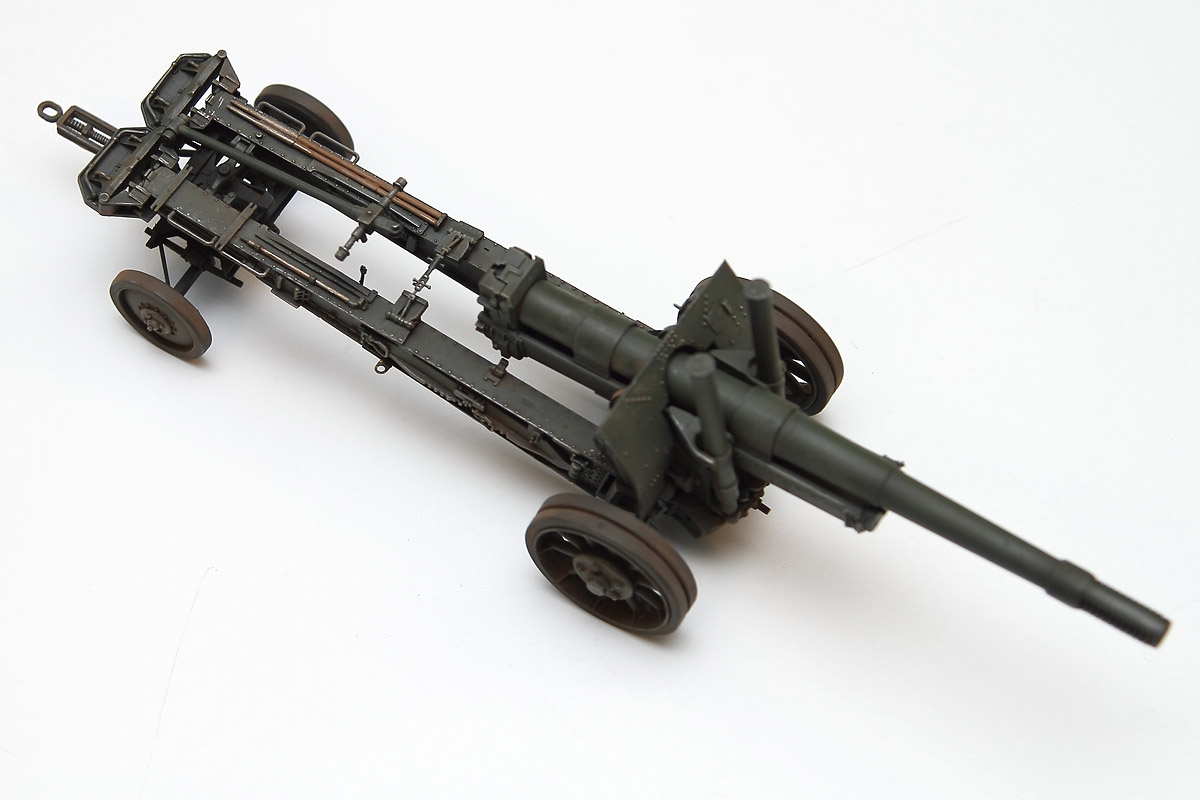 Fortunately, Trumpeter chose to include plastic tires for their 152mm howitzer wheels and limber instead of rubber tires. Furthermore, the kits’ tires are molded separately from the wheels, so painting is a breeze.  Bravo!  I prepared the tires and slid them on without glue so they could be primed with the rest of the model but painted separately. 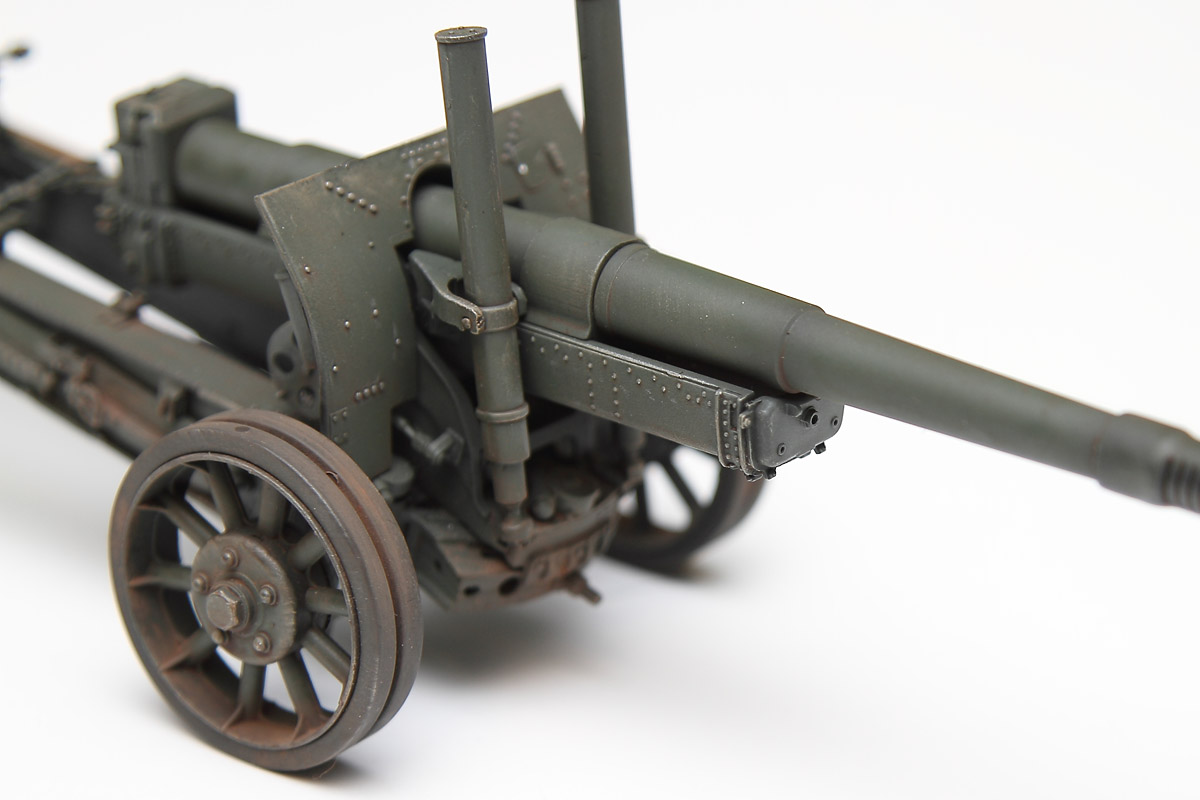 Like similar towed-artillery kits, Trumpeter has chosen to vaguely attach the main gun shield, relying on very narrow photo-etch parts to secure it on each side.  These PE parts are articulated and must be bent perfectly, first in half down the middle, and then at three different angles each.  There are no other (plastic-to-plastic) attachment points for the main shield.  After several unsuccessful attempts, I merely put some thick super glue across the top of the main barrel and manhandled the shield into place.  Once I lined it up I touched it with accelerator and then put several drops of Testor’s liquid cement across the seams for additional strength.  I discarded the PE.  If I could start over I would attach the shield’s plastic parts to the main gun housing as I did, let it dry thoroughly, and then carefully bend and attach the PE parts after the fact.

The tool box (parts A2 and A45) do not have any attachment points behind the shield, and it does not lie flat against the shield – it must be carefully attached using glue along it’s thin back edges, 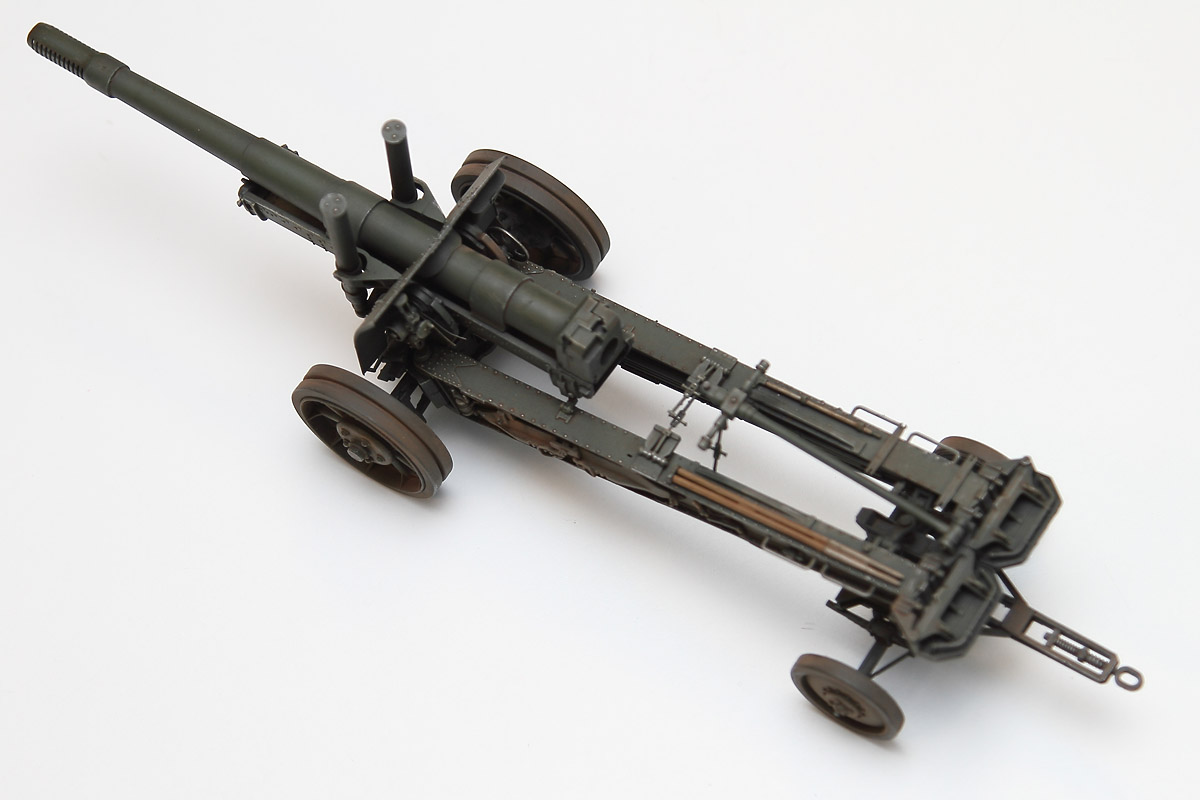 The muzzle brake is made of two plastic halves, and, unfortunately, is attached to the sprue in such a way that an ugly seam is exposed along the top of the brake, made worse by the sprue attachment points on each side.  Instead of trying to clean up this eye-magnet, I substituted it with the one-piece plastic muzzle brake from the Tamiya ISU-152 kit that I had purchased an after-market barrel and brake for.

Parts C16, C17, and C15 make up what I would consider the Achilles heel of the kit.  Together they form a U-shaped housing that the main gun assembly slides forward and backward in.  Unfortunately, these three pieces do not have any positive attachment points; the alignment of this crucial assembly relies on a long, thin trough along each side of the three pieces.  This design approach requires that the three pieces be glued solid enough to bear the stress of many other attached parts, yet at the same time, flexible enough to adjust the alignment as other parts are attached.  I went back and fourth with this conundrum and never really got the alignment correct.  Later on, when the main gun was fitted to the gun housing, I had to break parts and glue them slightly off center to gain a semblance of overall alignment. 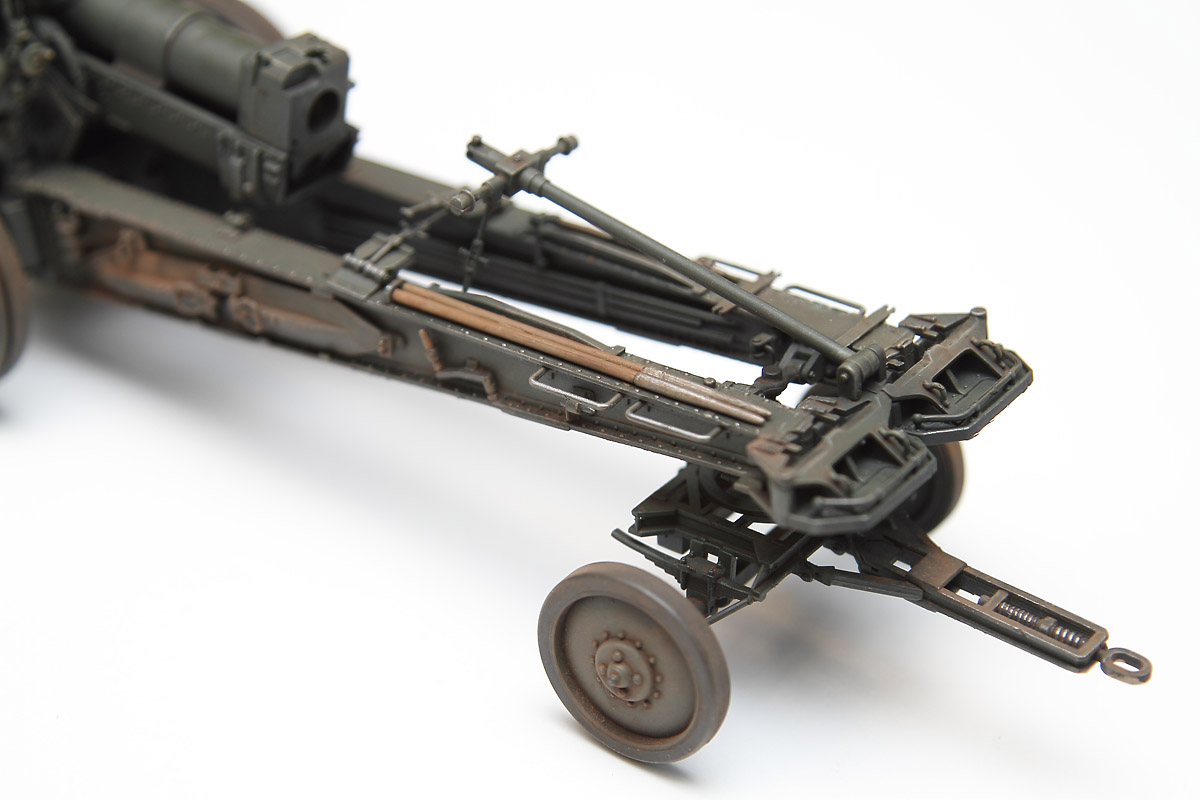 Since I chose to build the model in its travel mode, I needed to assemble and attach the eight-piece manual handle and draw bar (which appears to be absent in it’s static, ‘combat’ mode).  Unfortunately, this was fraught with fit problems and the two stanchions (Parts D35) that hold the draw bar up are so thin that they both snapped when being removed from the sprue (these each had two attachment points).  Furthermore, the design of the entire assembly requires that in order to get the correct angle of the draw bar right, very small and delicate parts on both ends must be glued and fussed with at the same time – a common theme with this kit.

I solved the problem by gluing the two (bottom halves of the) D35 parts to the main howitzer trails and let them dry, followed by the top halves.  Once these were dry, I assembled the main bar and its two handles, addressing fit problems regarding the attachment points.  Once this was dry, I attached the bar to the trails and simply dropped it down on the (now somewhat sturdier) D35 parts and called it a day. 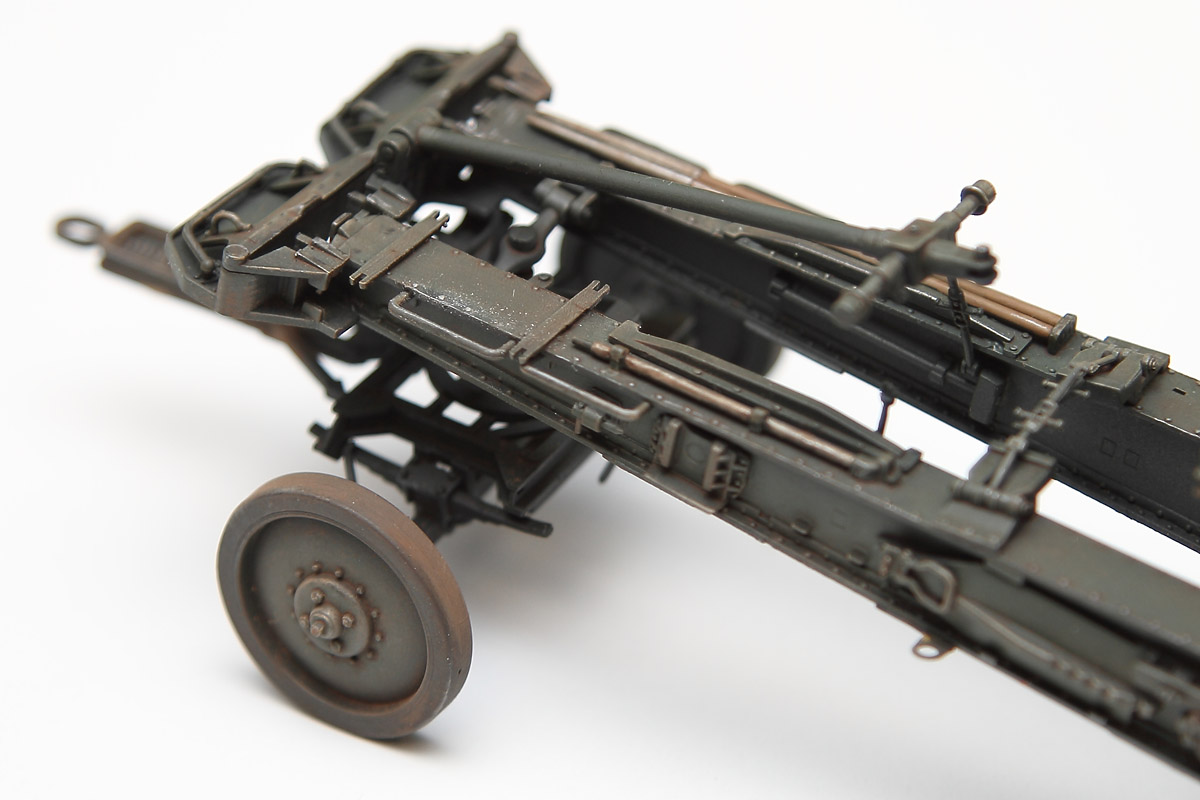 Once you finish the sub-assemblies and have accounted for all the parts, the kit comes together pretty quickly, although there are fit problems with each main assembly.  I had to enlarge receiving holes or remove posts altogether to make things fit.

That said - with a little effort, I think the final result looks pretty good and complex – which is the look I am always after with artillery pieces. 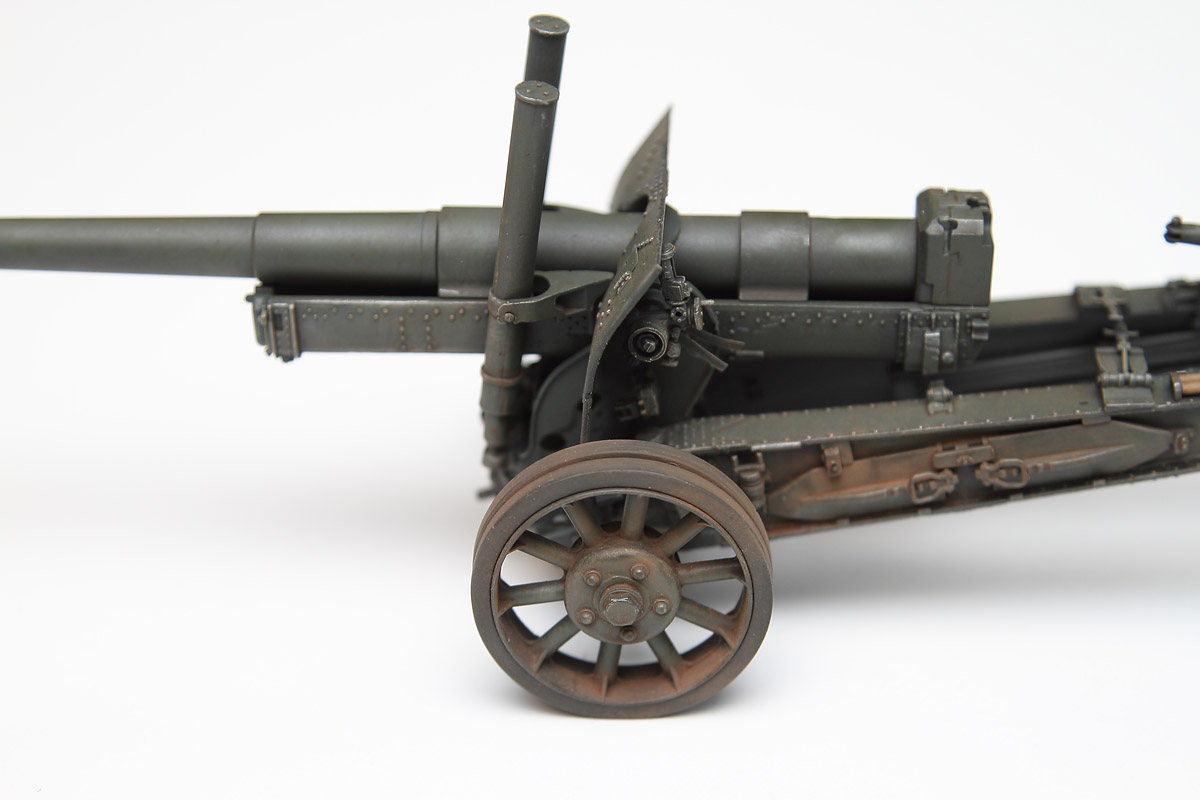 I assembled the entire model before painting.  With so much Testor’s glue on the model I started with an even primer coat of Gunze Mr. Surfacer 1200.  I followed this with a base coat of Tamiya NATO Black.  Both of these layers are very thin and (I feel) did not detract from the look of all the delicate parts making up the gun.

After removing the tires, I started with an overall coat of Model Master Russian Armor Green.  Once dry, I followed this with a post-shading coat of Model Master Topside Green, applied to the exposed flat surfaces, leaving the darker color to mix with the background black in the shaded areas.

I then painted the tires Model Master US Army Helo Drab, and attached them to the wheels.

Next, I shot the whole thing with a coat of Future to prepare the surface for a wash and let everything set for three days.

Next, I dry-brushed the exposed edges with Model Master Afrika DunkelGrau, followed by a pass with a Prismacolor silver pencil here and there to bring out a metallic glint.

Finally I dusted the lower portion of the howitzer with a mix of MIG Black, Russian Earth and Old Rust pigments.

The build took me about eleven hours to complete, most of the time spent on assembly.

The number of small parts and complexity of the assembly made building this kit a challenge.  The attachment points for many of the parts in the kit could have been better-designed.  Many such points were simply non-existent or would not fit.  Also, I would like to have had a one piece muzzle brake, or at least a muzzle brake with better engineered sprue attachment points.  The Soviet 152mm gun’s slotted muzzle brake is the ‘sexy’ part of the whole artillery piece, and all eyes will be attracted to that part like they are to the cockpit of an aircraft.  It must be flawless.

On the positive side, however, the completed kit conveys the rugged, rivet-smothered look of a high-caliber Soviet field howitzer and I think it will look great behind a Voroshivolets tractor or other prime mover. 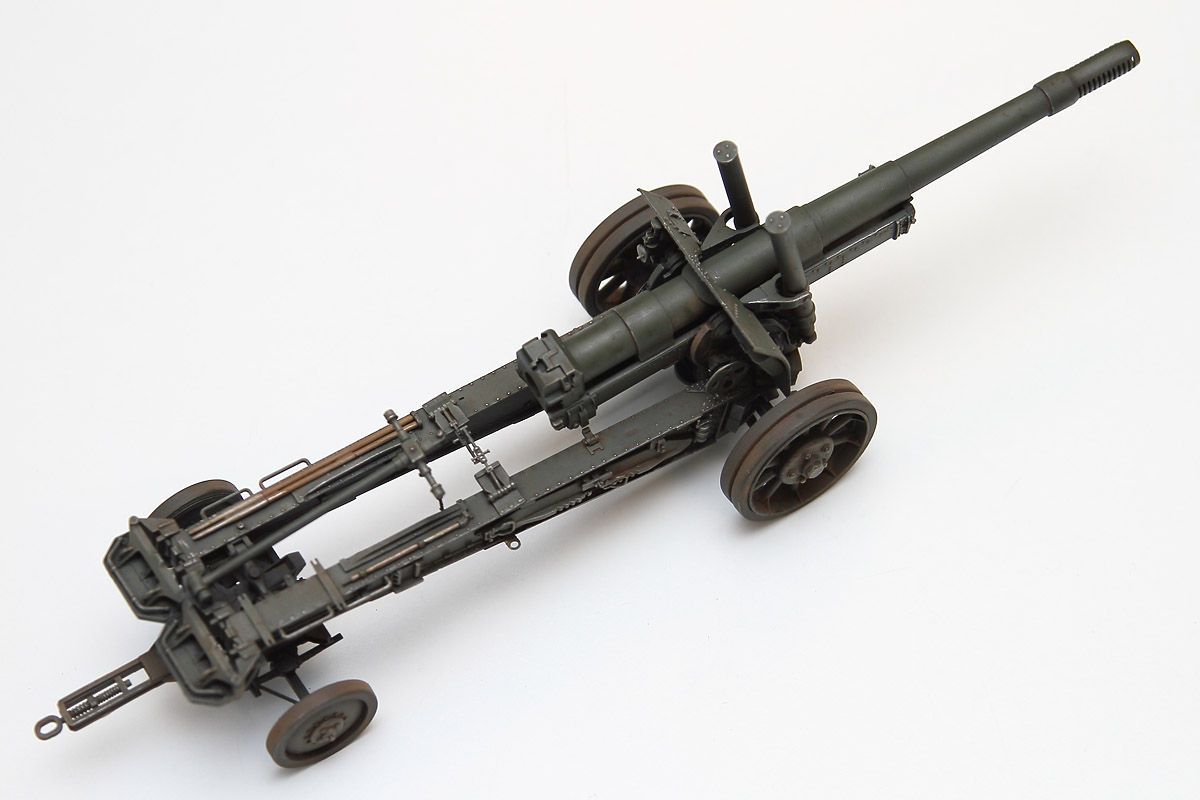 I would recommend this kit only to modelers experienced in solving problems.  That said, however, the kit builds into a very nice and unique representation.  I'd like to thank Steven’s International for providing the review sample, and Internet Modeler for giving me the opportunity to build the kit.