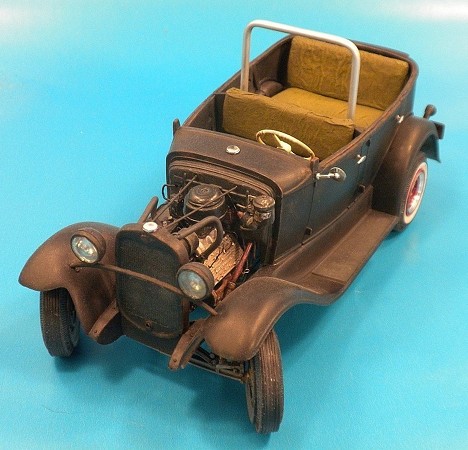 "Son, you're gonna drive me to drinkin', if you don't stop drivin' that Hot Rod Lincoln". The late Charlie Ryan wrote those lyrics almost sixty years ago.  "Hot Rod Lincoln" was released in 1955, originally recorded by Arkie Shibley and the Mountain Dew Boys.  It was a follow on to the earlier Shibley hit "Hot Rod Race", wherein a battle between a Ford and Mercury is unexpectedly concluded by "a kid, in a hopped up Model-A" (this is referenced in the opening stanza of Hot Rod Lincoln). Parts of the song are autobiographical. 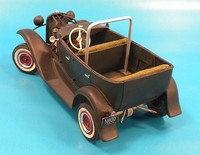 Ryan had a Model A with a Lincoln engine, albeit far more conventional than the car in his song.  North of Lewiston Idaho, Ryan would race his friends up the notoriously serpentine Old Spiral Highway (US 95), to the top of Lewiston Hill.  Over the years the song was re-recorded by many acts, including Johnny Bond and Roger Miller.  Along the way the lyrics evolved, most notably the engine going from a V12 (pre-1948) to V8 (post 1948).  The definitive version of "Hot Rod Lincoln" was released in 1972 by Commander Cody and his Lost Planet Airmen, and has ever since been the anthem of the hot rod community.  As a side note, there are no records of Charlie Ryan ever having any adventures involving his local constabulary. 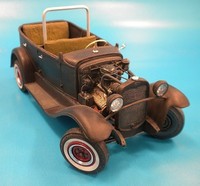 As the young lad in the song is obsessed with speed, but of insignificant means, funds would be his major concern.  Fate may have provided him with a mighty Lincoln power plant (perhaps from a cracked up '49 Zephyr), but the remainder would depend upon his ingenuity.  Even by the mid 1950's a derelict Model A could be found in any junkyard, and likely be had for the asking.  This models' chassis came not from the junkyard, but a Monogram 1930 Model A Cabriolet. 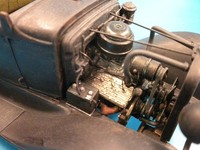 Although the shape is basically accurate, the brake system needs a little detailing by adding cables, rods, and access holes. Parts of the chassis were cut away to accommodate the larger engine, and new motor and transmission mounts were added.  The stock suspension system and drive train were retained (economics, remember?).  For a more candid appearance, the front wheels were repositioned to the left.  The entire assembly was sprayed in Floquil Rust, followed by multiple washes of Grumbacher Lamp Black, Burnt Sienna, and Davys Grey oil paint thinned with Turpnoid. 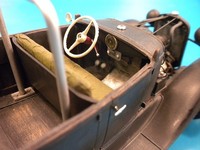 Some detective work was needed here.  In the song, several people are in the car ("Now the fellas ribbed me for being behind") meaning a four seater.  For weight savings, the body style of choice would be the 35B Phaeton Standard.  This Phaeton body came from the Monogram 1930 Model A Touring Street Rod.  Because no hot rodder would need interior panels, scratch built internal body structure and stiffeners were constructed using sheet styrene.  Large portions of the floorboards and firewall were cut away (room for the engine) and replaced with thin sheet styrene to simulate tin.  The wood (plastic) floorboards were cut away and replaced with bass wood.  These floorboards were lightly rubbed with an ink eraser to produce a "worn" look after painting them.

The interior instrumentation came from the spares box or was built from scrap.  Seat cushions were formed using balsa wood suitably shaped for a "lived in" look, and covered with tissue paper soaked in white glue.  The seat cushions were painted Model Master enamel Olive Drab to represent old Army blankets (priced to sell at the Surplus Store).  At this point, almost everything was spray painted Rust-Oleum rattle can Barbeque Black.  The under body, was sprayed in extremely thin coats of a custom mixed underside crud color, and built up as appropriate.  Sorry, but I cannot remember exactly how I got this color; I just kept mixing paint until it looked right. 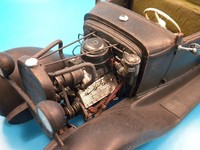 Here's the heart of the project: the 1949 Lincoln 337 cubic inch, 152 horsepower, 8EL V-8 engine.  The 8EL was designed for Ford trucks as a scaled up version of their 99A (95 horsepower) Flathead V-8. I chose the engine block from a Monogram 1950 F1 Pickup Truck.  I modified it to depict a '49 engine by moving the distributor to the rear of the engine and the oil filler to the right front, between the header and the water pump. The molded-on fan belt was cut away and the pulleys were rebuilt. I made a fan belt from thin styrene strip. 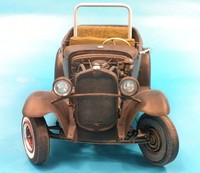 The high compression aluminum Offenhauser heads and intake manifold ("It's got Lincoln motor and it's really souped up") came from AMTs' 49 Mercury Sportsman.  I scratch built a four barrel Holley 2140 carburetor ("It's got a four barrel carb") and a Borg Warner Overdrive ("It's got overdrive, just won't stall") that I added to the transmission.  I sourced the air cleaner came from the Monogram Ford F1.  I painted the engine block Model Master Japanese Army Air Force Green, dry brushed with Testors Steel, then weathered with multiple washes of Grumbacher Lamp Black and Burnt Umber oil paints thinned with Turpnoid. The heads and intake manifold were sprayed Alclad II Aluminum.

I added all remaining details once the major assemblies were brought together. Safety tubes-the roll bar-were made from aluminum tube shaped with a tube bender, sheet styrene, and Grantline bolt heads.  The dual "Smithy" exhaust system came from the Monogram Touring Street Rod; it was painted Floquil Dull Silver enamel, with the mufflers painted Tamiya Clear Blue.  The "three-in-a-tree" steering column was found in the spares box. As it would have come from another junker car, the column was painted dark red.  The steering wheel also came from spares. 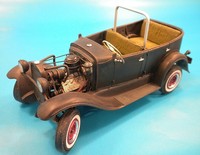 The horn ring was removed, the horn button drilled out, and scratch built column nut added.  All remaining pipes, hoses, linkages, and wires were added, along with a 1955 Nez Perce County (Lewiston) Idaho license plate.  Upper surfaces were further weathered with thinned Floquil Rust daubed randomly around wear areas, while the undersurfaces were treated to additional applications of Undercar Crud color.  All plated parts received a wash of thinned Tamiya Clear Smoke mixed with Testors Acrylic Flat to tone down the shine.  The wheels and tires came from the Monogram Ford F1 and the chrome beauty rims came from the AMT 1949 Mercury Sportsman.  The tires were chucked into a Dremel Tool and slowly worn down with 600 grit sandpaper.  After all; "the brakes are good, tires are fair". 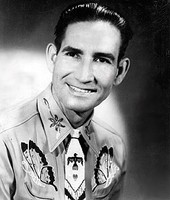