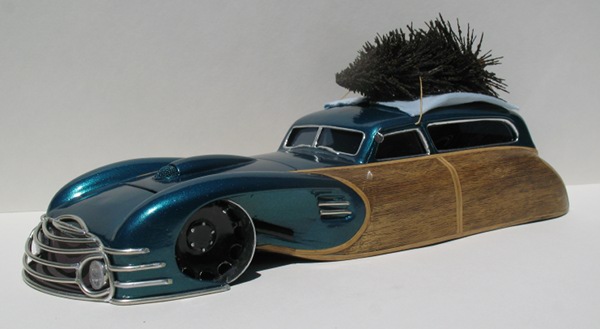 This is one of my model projects that is not on the to do list, but here it is anyway... I was trying to make some "order" among my model parts, kind of a winter cleaning.  I ran across the body of a die-cast 1/24 Burago Ferrari 250 Testarossa, and the body of an AMT/Ertl 1939 Wagon Rod in 1/25th scale.  I first thought I would keep the Ferrari's taillights and front lenses, and trash both bodies.  I have found that sometimes I regret throwing models away, because for sure a few days later, you will say, "If I didn't trash that part..." So, I started to play around with the bodies, and the Wagon Rod body, was fitting very well inside the Ferrari.  I cut off the Ferrari's rear end, and put on it the Wagon Rod body.  That shape captured me. I always liked old cars with huge hoods, and from there I started to think about the fusion between these two completely different bodies.  I didn't want to put too much effort or detail on the chassis, because I was looking only for a body shape. 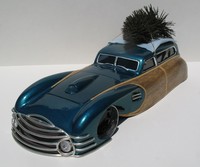 So you can call this model a Curbside or Slammer. I planned to build it as a panel wagon, and leave the windows on the Wagon Rod closed, but decided instead to open them and build a station wagon.  What I like about this type of project is that you build it as you go. I started to glue the two parts together, making some reinforcements on the structure, because one body is die-cast metal, and the other is plastic. The second step was to cut the Wagon Rod rear fenders and turn them a little bit and put them lower to level all the body to the ground. After that, the only thing needed was to give the model some shape, with some paper stripes I built the side panels adding some reinforcements here and there, and finally I had under my eyes a clear visual model, with the shape that I was looking for in my mind. After a long round of primer, sanding, putty, sanding, primer, putty, sanding and primer, the body was ready for the paint. I had some reservations about colors; I felt a single color paint job on such a massive body might look too heavy.  I mean, a full body in one color on this car needed something that "cut". I considered a two-tone paint job but I wasn't sure.

Then I decided to make it into a Woody. I thought about making some wood panels but the rear body was too rounded to attach real wood. I therefore painted the wood on a piece of paper that I glued to the body after painting it. I scratch built the front wheels out of a plastic chair foot and paper. This model is a curbside, but I couldn't resist adding the interior with a scratch-built dashboard and seats. Also it has a motor, from an unknown source-I don't remember! I know that the intake is from an Indy car... At this point the model was almost completed, the only thing missing was the front end, and I didn't have any idea on how to build it. At the end I came out with a metal grille, and front headlights from the Wagon Rod. I added a Christmas tree, with rope and blanket, because I finished this model in December... This model is one of my favorite projects ever. It came out without any major issues, and it was fun to build something without planning it. 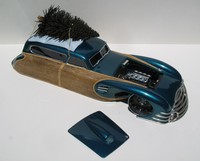