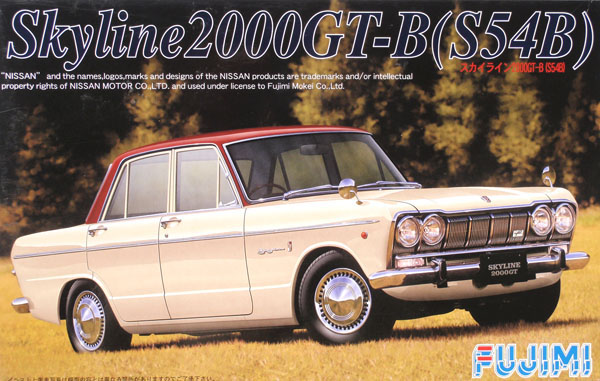 Japan held it's first Grand Prix in 1963 at the new Suzuka racecourse, 180 miles southwest of Tokyo.  A lone Prince Skyline 1500 was entered in the GT II Class against a full field of European and Japanese entrants.  The eleven-year-old Prince Motor Company was already a well-known producer of high-end luxury cars exclusively for the Japanese market.  The Skyline, chosen for it's peppy performance and good handling characteristics, was driven by 21 year old future racing legend Tetsu Ikuzawa.  For Prince, the race result was nothing short of abysmal.

Stinging from their appalling showing, Prince engineers immediately set to work on a new and more powerful Skyline.  The plan was simple enough: take the standard Skyline and cram in a 2 liter, inline six cylinder G-7 engine from the much larger Gloria model. The motor barely fit in the engine compartment, despite adding eight inches to it. Upgrades included front disc brakes, a limited slip differential, and five speed close ratio racing shift pattern transmission.  Thus was born the Skyline 2000 GT-B.  Skyline felt a 2-liter engine might not be quite powerful enough and the S54 model was equipped with three Webber 40 DCOE-18 carburetors, bringing the total horsepower to 125.

Prince entered five Skyline 2000s in the 1964 Japan Grand Prix against a host of competitors that included MG, Lotus, Isuzu, Datsun, and Triumph. A Porsche 904 added to the lineup as a private entry was a last minute ugly surprise.  The race quickly became duel between the Porsche and the Skylines, often with the Prince team taking the lead.  The other competitors were left far behind. The Porsche ultimately prevailed and the Skylines finished second through sixth. Ikuzawa drove the Skyline number 41, finishing in second place. 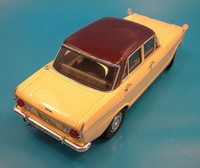 Prince left no doubt that it could build a car competitive not only with the best of the Japanese manufacturers but also the Europeans.  The Skyline 2000 GT-B became available to the general public at the beginning of 1965, and overnight became the car to own.  Business executives, film stars, millionaire playboys, gangster kingpins, anyone famous or notable had to own a Skyline 2000 GT-B. Prince Motor Company ceased to exist following its 1966 merger with Nissan Motors but the Skyline name continued on for many years, and is still available today as it's direct descendant; the Nissan GTR.

Four years ago Fujimi released what could arguably be called Japan's most important performance sedan.  The kit is available in two editions, the street version and the slightly modified version that raced in the second Japanese Grand Prix.  A crisply molded one piece body accurately captures the somewhat unusual lines of the real car (including the noticeably long hood).  A full interior is included that features decals for all instrument gauges.  The clear parts are commendably free of flaws, scratches, and distortion.  Fujimi is to be highly praised for the realistic manner they used to recreate the beltline chrome strip.  Fujimi  molded individual strips for fenders and doors that fit nicely into their prospective channels.  The end result is highly convincing.

Fujimi also include decals for script work. This is a thoughtful touch: when these parts are molded to the body they must be painted by hand, requiring a steadier hand than I possess.  Finally, the front wheels are posable, giving the finished model a nice candid look.  The fit of the parts is, as would be expected from this company, flawless.  The only possible caution I would advise is that the body to chassis fit is extremely tight, and it might be advisable to forego test fitting of this assembly until time to do this step is at hand.  Rest assured that, with just a little gentle bending of the body sides, everything will come together nicely.

I don't remember having any problems building the kit.  The model is a curbside (i.e. no engine) model, which saves time by not having to plumb and wire the engine compartment, as I am usually wont to do.  I did manage to launch one of the fender mirror mounts off into the ether, and subsequently had to fashion replacements. I used custom mixed Model Master enamel paint for both the body and roof colors, based on pictures I found on the Internet.  I used Grumbacher Lamp Black oil paint thinned with Turpenoid as a wash to darken both the grillwork and hubcap detail.  This had no ill effect on the chrome plated parts.  I applied Bare Metal self-adhesive foil for additional trim.  I painted Floquil Grimy Black enamel paint, dry brushed with Testors Aluminum enamel, followed with a wash of Grumbacher Burnt Umber mixed with Davy's Grey oils (again, thinned with Turpenoid).

I would highly recommend this kit for anyone looking for an easy build of a subject that is both important and largely forgotten.  Your biggest problem may be in finding this model.  I lucked into mine at my local hobby shop, but you may have an easier time searching the Internet.  I found a few Skyline 2000 kits available through online shops.***image3**