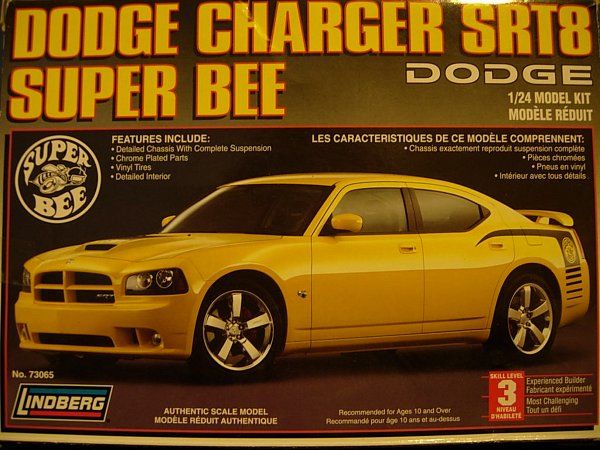 A lot of people have mixed opinions about the Charger. On the one hand, the Charger is a classic American muscle car, known solely as the General Lee from the famous hit TV show from the early 1980's, "The Dukes of Hazzard". This is classic American Muscle as most people remember it. On the other hand, you now have a 4-door family car for running errands. Some of those fans would disagree with Dodge's recreation of the Dodge Charger as a 4-door sedan. However, Dodge has tried to convert those fans by offering the 2007 Dodge Charger with the SRT8 Super Bee package. The Super Bee model boasts a 6.1 Liter, 370 cubic inch Hemi engine that puts out 425 horse power. Now this is a "grocery getter" that I wouldn't mind driving. This monster sedan will do a 0-60mph in five seconds and get you to 100mph and then back to a stop in just over 16 seconds. Not bad for a big, bulky 4-door American car. 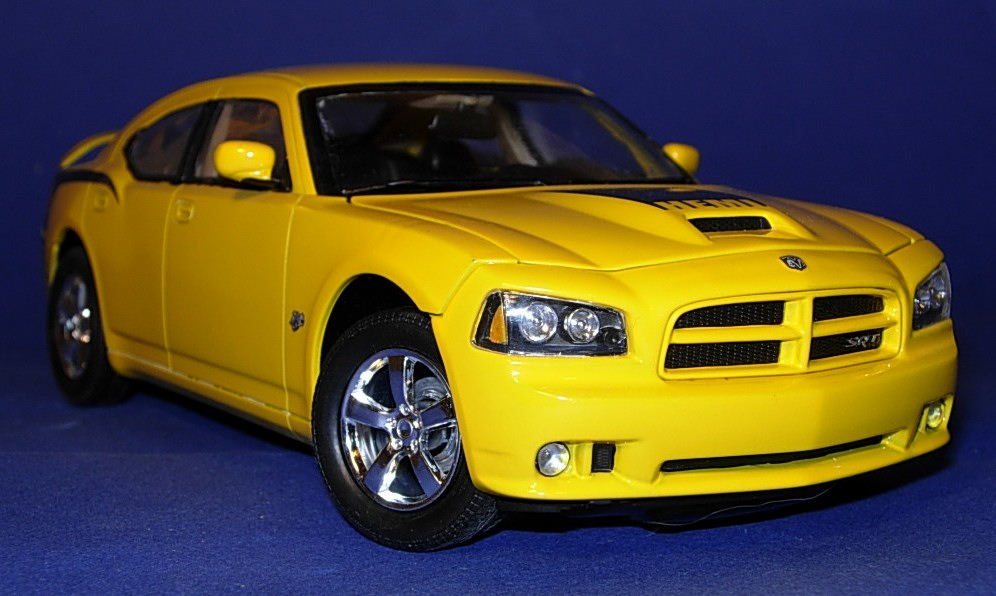 It's been a long time since I have finished a kit. As modelers, we all go through "ruts". There are many times where life gets in the way and we don't get the time to build. This kit had many of those times, which in the end, added up to over a year from start to finish. Jacob Russell, who is the Automotive Editor, handed me this kit to build and do a write up on. I was more than happy to build this and provide my thoughts. The idea was that the build would come soon after the "First Look" write up. Unfortunately, my "modeling rut" included working two jobs and later becoming a full time student. Needless to say, modeling had to take a back seat. So, I would like to apologize to Jacob and anybody waiting on this. 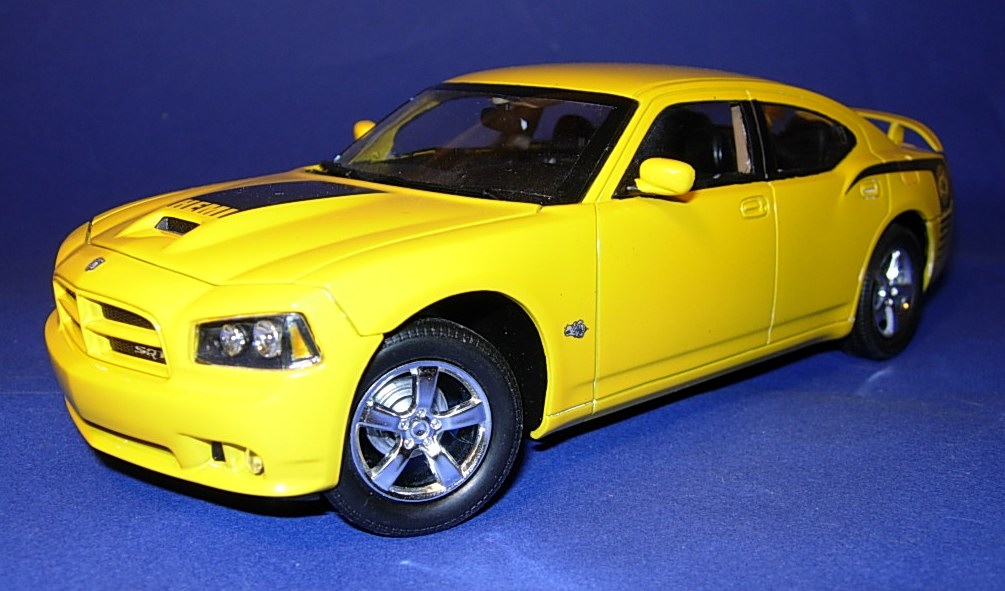 So, now on to the model. This kit was made by Lindberg and is a skill level 3. Like the Rammunition monster truck I built, I was a little intimidated by the Skill Level 3 label. But Lindberg does such a great job on the quality of the kit that the skill level almost doesn't matter. The number of parts in the kit is unclear and not mentioned on the box or in the instructions. This highest numbered part labeled was 171, but not all of the parts are used. But I used over 150 parts building the kit, so it's still a lot to keep track of. The directions were clear and easy to follow and the paint guide was also easy to go along with. 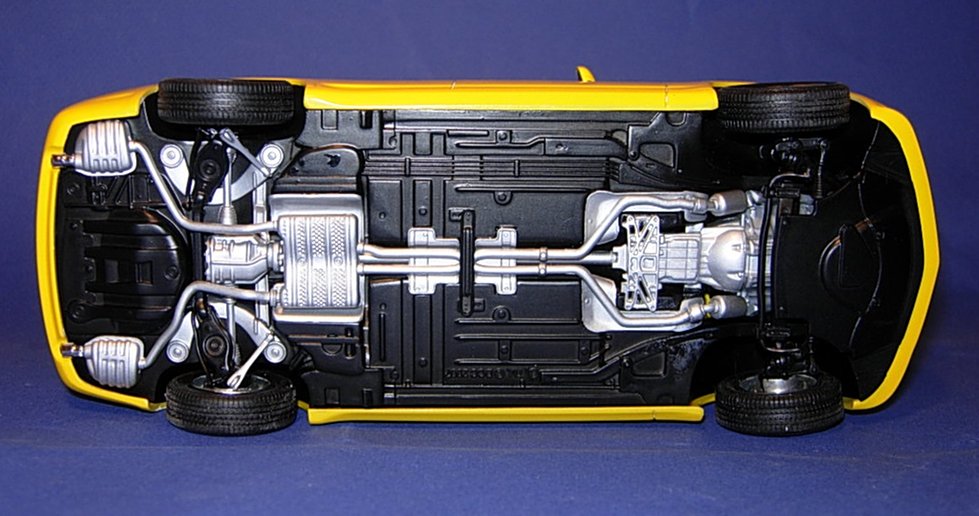 Starting off, all of the engine pieces fit together well. There are a few small and delicate pieces, but they all assemble nicely and fit on the frame of the car. There is a disclaimer on the instructions which advises you that that the engine will be a tight fit under the hood, but all the parts will fit. They weren't kidding. The pieces were a tight fit and I actually had to do a little trimming to the last few components under the hood just to get it to close properly. The windows were the only other issue I had with this kit. The windshield curve did not conform perfectly to the body of the car. This required me to hold it in place while the glue dried. 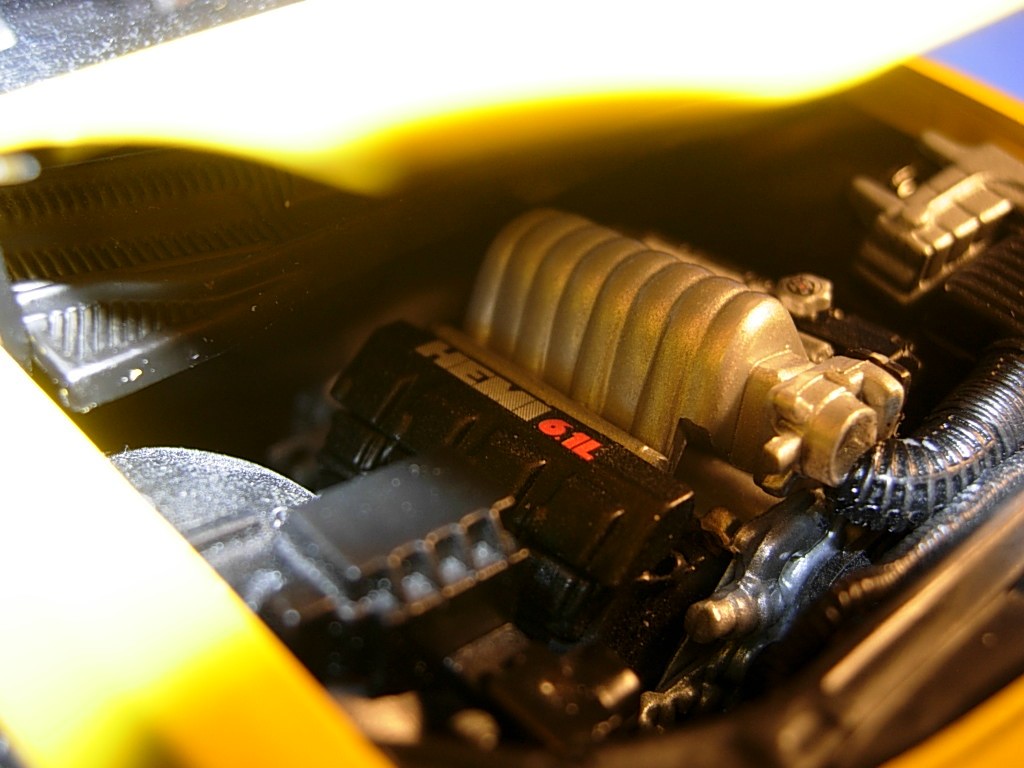 All of the other parts fit together nicely. The front end of the car is very well done. In the grille, the SRT emblem is supplied in the decal sheet. This shows up nicely on the grille mesh that is painted a flat black. The headlights look great. The Charger has a very unique aggressive look to it, almost as if it is mad. The headlights themselves are molded in chrome. However, behind the glass of the headlights are the directional signals. The 1:1 car has an amber directional signal, but I didn't have a convincing paint to depict this. I tried a new technique to assemble the headlights. I cut a piece of "Bare Metal Foil" to the size of the directional and I painted the amber over that. It gives a realistic reflective background and looks great. Perhaps this is a technique you have used already, but it was a first for me. The cutouts on the bottom of the bumper that serve as intakes for the Charger were a little hard to get to, but with a small paint brush it will be easy for you to paint. For the rear side of the car, the tail lights need to be painted in red. For this, I painted the inside of the clear parts with Tamiya X-27 which is a clear red. It dries in such a way that you can see through the red to the clear parts beneath. This looks very similar to the 1:1 car and shines when sitting on the model. 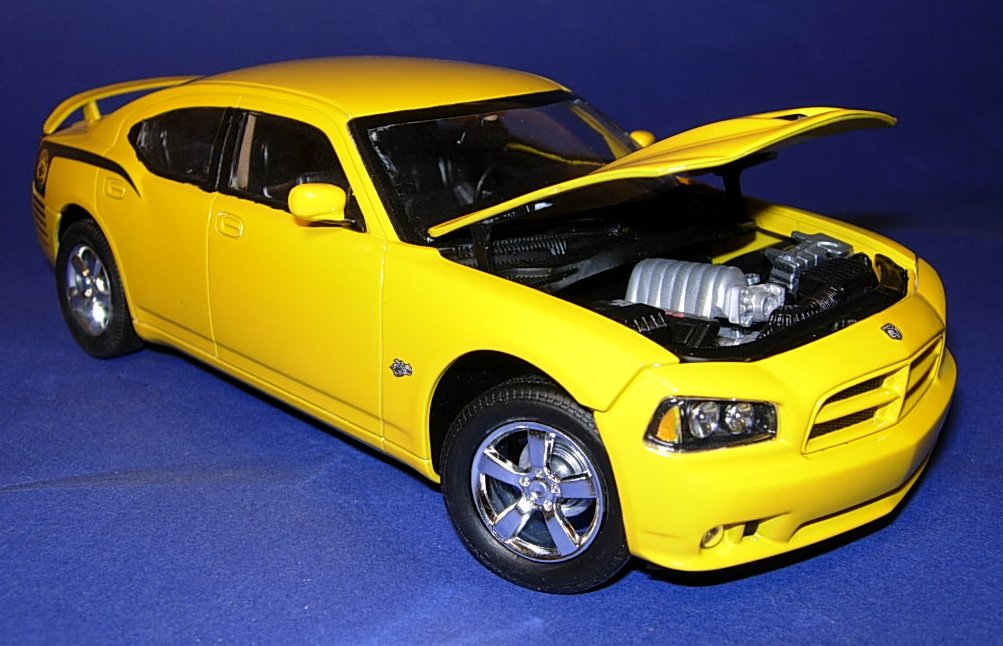 The interior of the Charger was pretty cut and dry. The door panels mount alongside the dashboard and back seats, just like many other kits. The bucket seats are a nice fit as well. The main dashboard piece is plated in chrome. After adding the decals for the speedometer and tachometer, it has a very detailed look to it. The front end assembly is designed very well. The tie rod ends clip on so that the front wheels turn together. This makes it fun to turn the wheels and pose the car when you have it on display. The hood also opens to display the engine if you choose. It is always nice to see that big HEMI when you pop the hood. 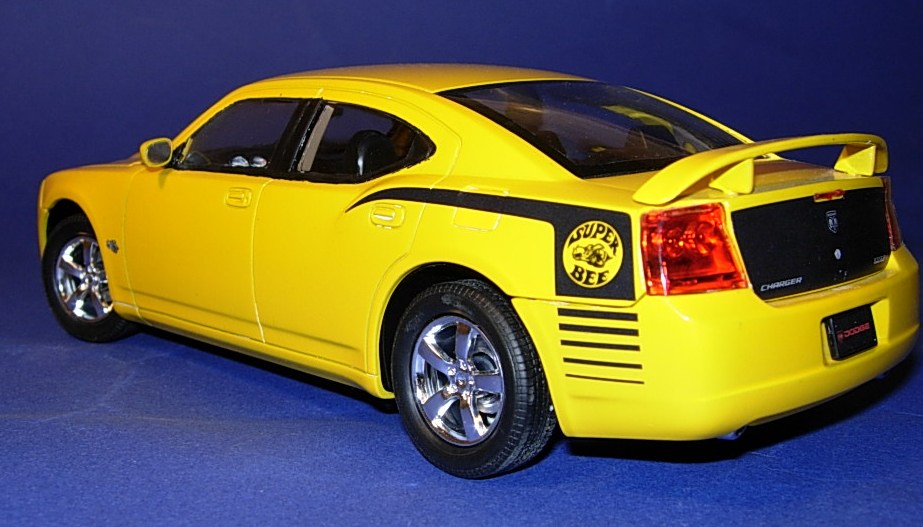 Rounding off the finishing touches, are the decals. All of the decals fit the car perfectly with the exception of one of them. The rear of the car, on the back of the trunk, has a larger decal that adheres below the spoiler. The problem here is that the plastic on the trunk has a raised area for the emblem of the car. When applying the decal, this bump causes the decal to be distorted somewhat, and leaves an air bubble underneath. I suppose this could be remedied by sanding it flush with the rest of the trunk. But hindsight is always 20/20 right? 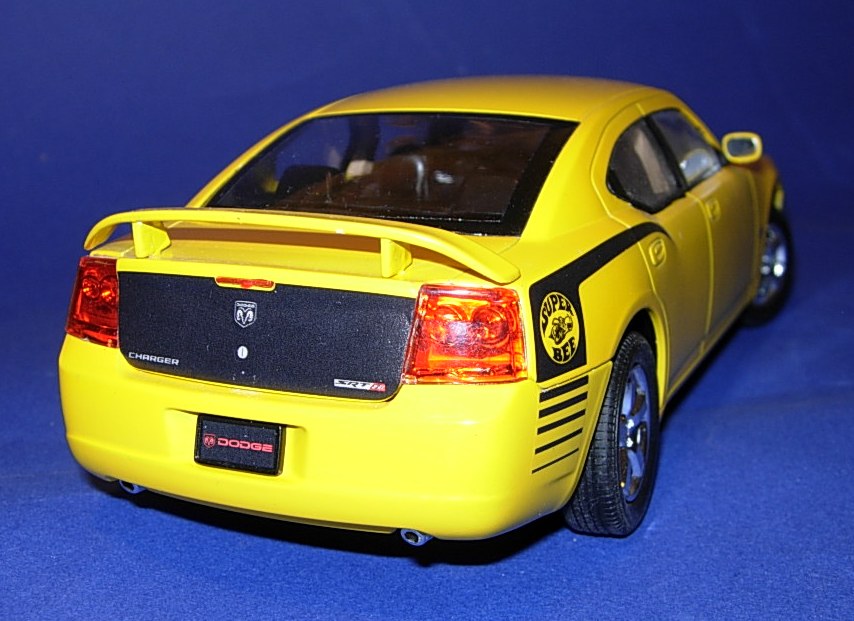 The exterior paint was done in layers of Tamiya spray paints. Tamiya primer was used as a base. After that, TS-47, which is listed as a Chrome Yellow was used as the body color. I used Tamiya TS-13 clear coat after I applied the decals. Remember to go lightly with the TS-13 at first when you spray it over decals as it can make them bubble up and distort. I do 3 or 4 very light mist coats with a lot of drying time in between before laying on the full coats of clear. The aluminum parts were done with Tamiya TS-17 Aluminum. This paint was used for the engine block, exhaust and a few parts on the under carriage. The instructions call for a semi-gloss paint for the interior, which is what I used. I feel it creates the look of leather when applied. 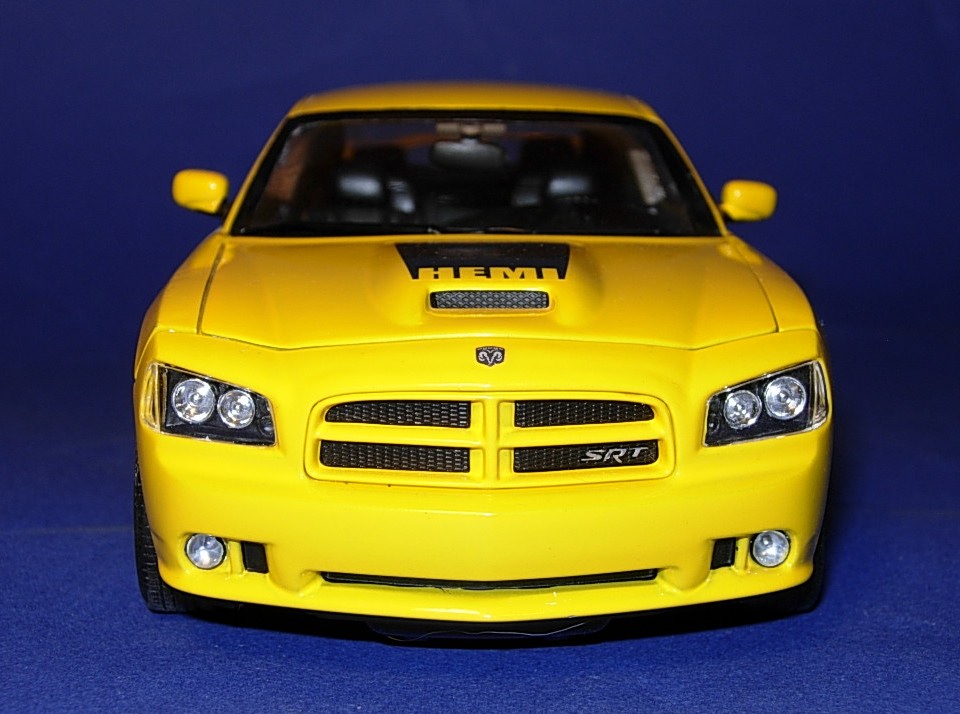 This was a very pleasant kit to put together. This model took me much longer to assemble due to scheduling on my part. But the few chances I got to work on it, it went smoothly. The directions were very clear and the parts went together very well which is a testament to the quality that Lindberg puts forth in its engineering. The ride height seems to be a little high, but this is a problem with a lot of kits and manufacturers out there. The wheels shine when the light hits them and look very close to the 1:1 car. When completed, the car looks great. I really like the fact that you can display the model with the hood open showing off the HEMI. The fact that the wheels can turn also adds a nice touch to the model. Every time I build a Lindberg model, I am surprised at how well they assemble. I really like the Lindberg kits and recommend them to everybody. I enjoyed this kit and highly recommend this to all builders. Thanks for reading and happy modeling.