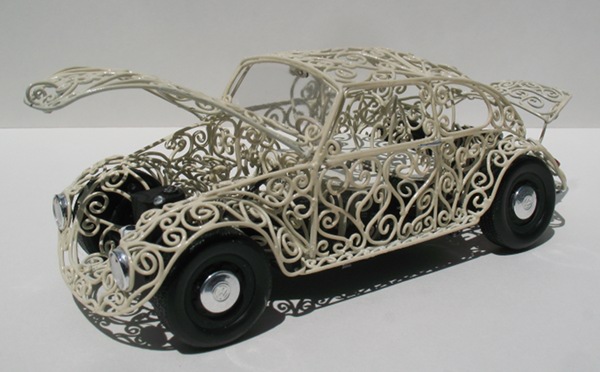 A while ago I bought some models, one of which was a Revell 1/25th scale VW Beetle Convertible . It had been painted with spray paint and it was missing the box, instructions or decals. But the kit was complete and some parts were still on the trees. The kit didn't look too bad. Some parts, above all the chrome parts, needed a lot of cleaning from the molding. It sat for a while, until I decided to build it, but how? So, I searched for convertible VW Bugs on the Internet. It amazed me how many Beetles you can find there, built in different combinations. But nothing I saw attracted me. I wanted something unusual, or never built as a model. So, I expanded my search a little bit, until I saw a white wrought metal Bug ... I liked it! After thinking, for a while, and finding more pictures of it, I decided to build it ... The big concern, as usual, was how to transform this idea into a model. 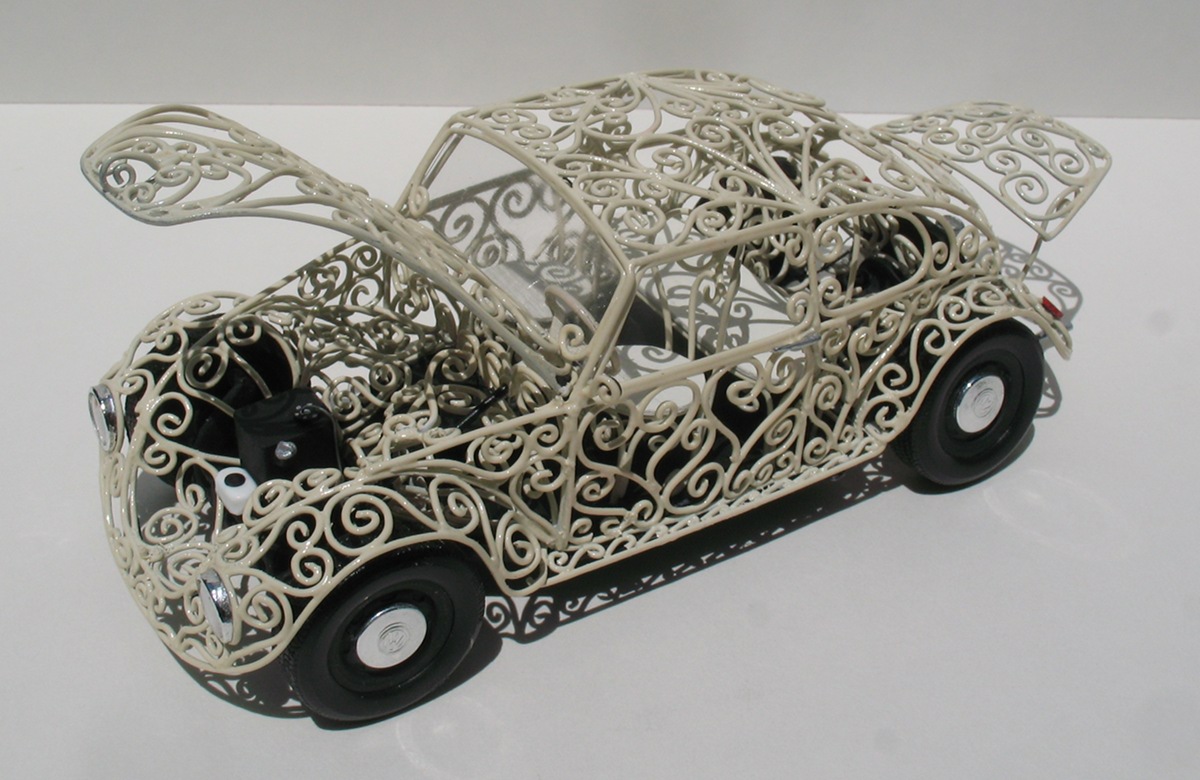 Using the model kit body, I bent metal into the desired shape – for the outline of the body. I started with the front end, so I could make some tests with soldering the metal parts on it, but with my equipment it was too difficult (kind of like solder one piece and unsolder two). It was too difficult and it took too much time to correct it. I opted for glue instead of solder, and it worked pretty well. After I finished the outline of the frame, I started to make all of the decorative parts to fill in the frame.

The first parts were a test, to see how to make them, and to learn about it. After I figured my working method , the parts were easy to construct. To make all of the parts identical, I started to build the components as pairs. Next I glued them on the right and left side of the model, at the same time. I used this technique also for the hood, trunk, and fenders. Each part was hand bent - using normal pliers. 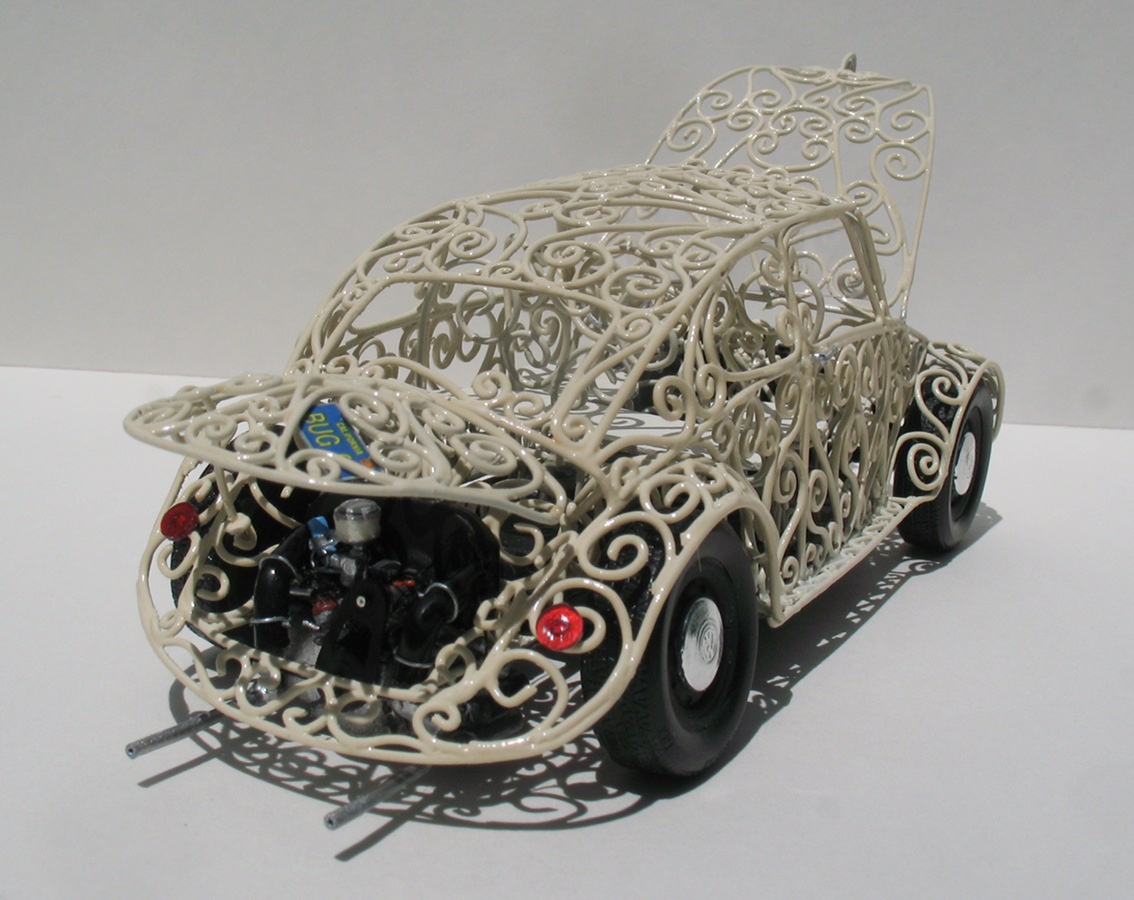 The metal parts on the fenders, hood, and trunk took longer to work with, bending and trying them, because they were bent on the three axes, in order to have a round shape. Another nice thing, is that all this wrought metal can have different shapes, be they singular or double, or some other shapes, like in filling in the frame, to make it fit the chassis. This VW is also called "wedding bug", so I thought to dedicate it to the anniversary of the first time I met my Love, making a little heart on the roof ... The interior it is pretty simple, I searched the Web for images of outdoor wrought metal chairs, to have an idea, and make my own for the interior. The dashboard is also made with wrought metal, with a speedometer and some simple instruments for driving it. Any self-respecting Beetle has some flowers on the dashboard, so I made some wrought-iron flowers for it. 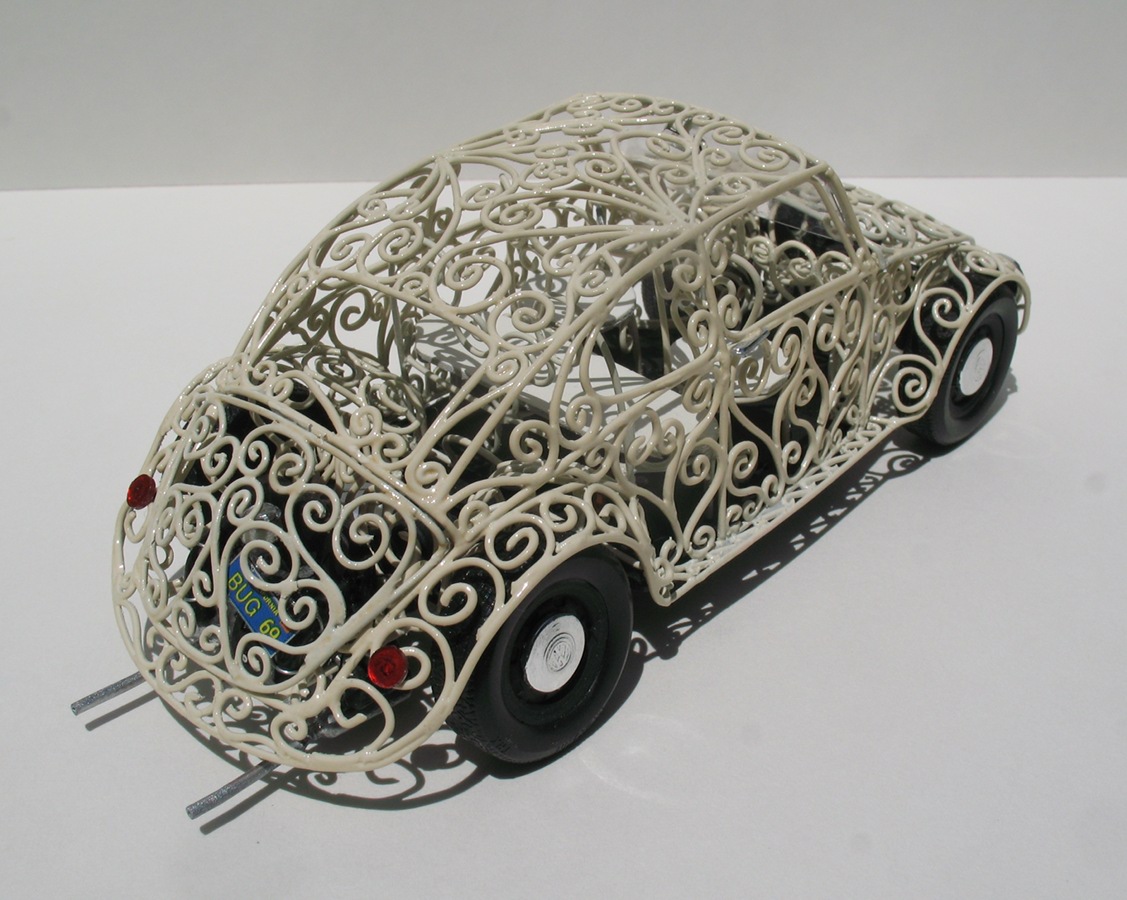 The chassis is the stock one from the kit - with some modifications. Also, the engine is from the kit; however, I added some details. I left the heating system on it, because it looked too naked without it. I moved the battery to under the rear seat, and under the front hood I made a gas tank, and a brake system. At the end, I wasn't sure about the color of these components. I have seen them painted white, yellow, and I saw one green ... I went for a white-yellowish color that I think fits this kind of car better. Over all, I had a great experience building it, I learned some new things, and above all had fun! 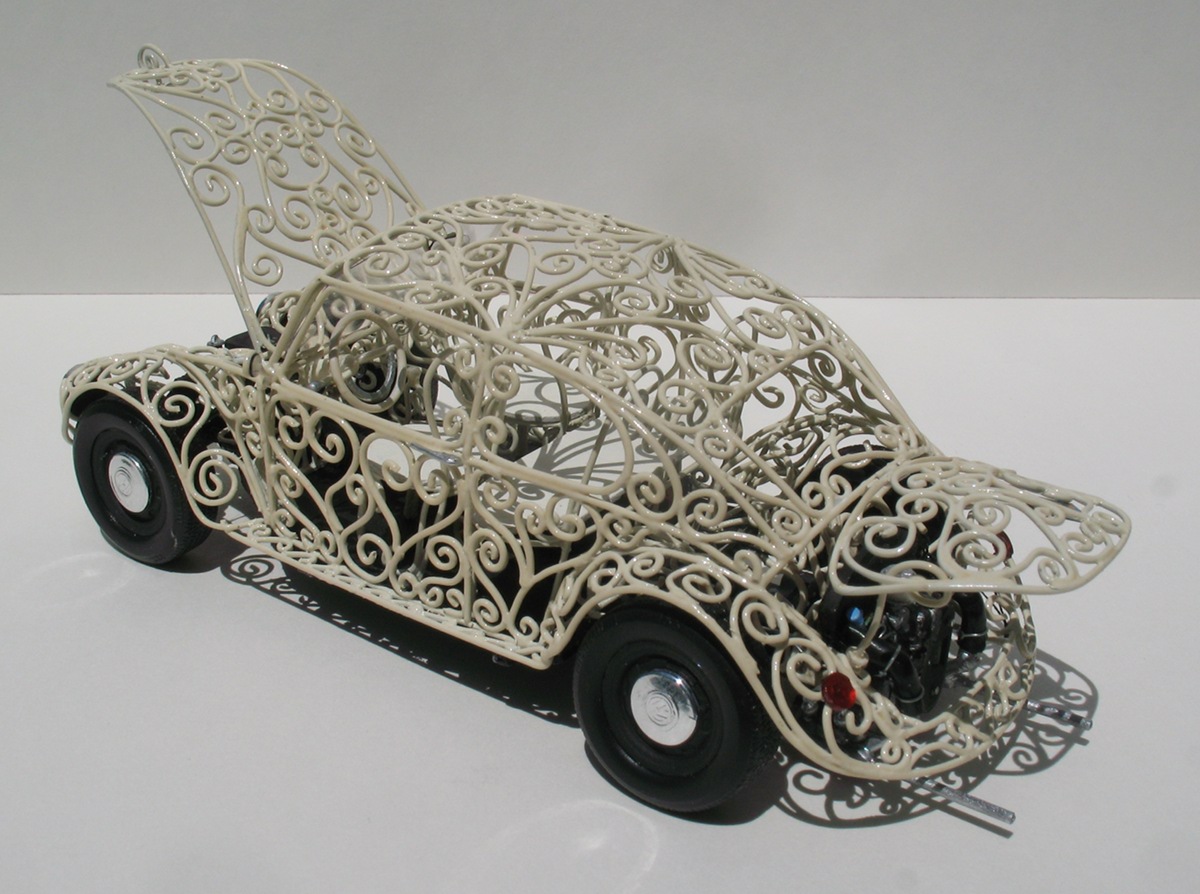 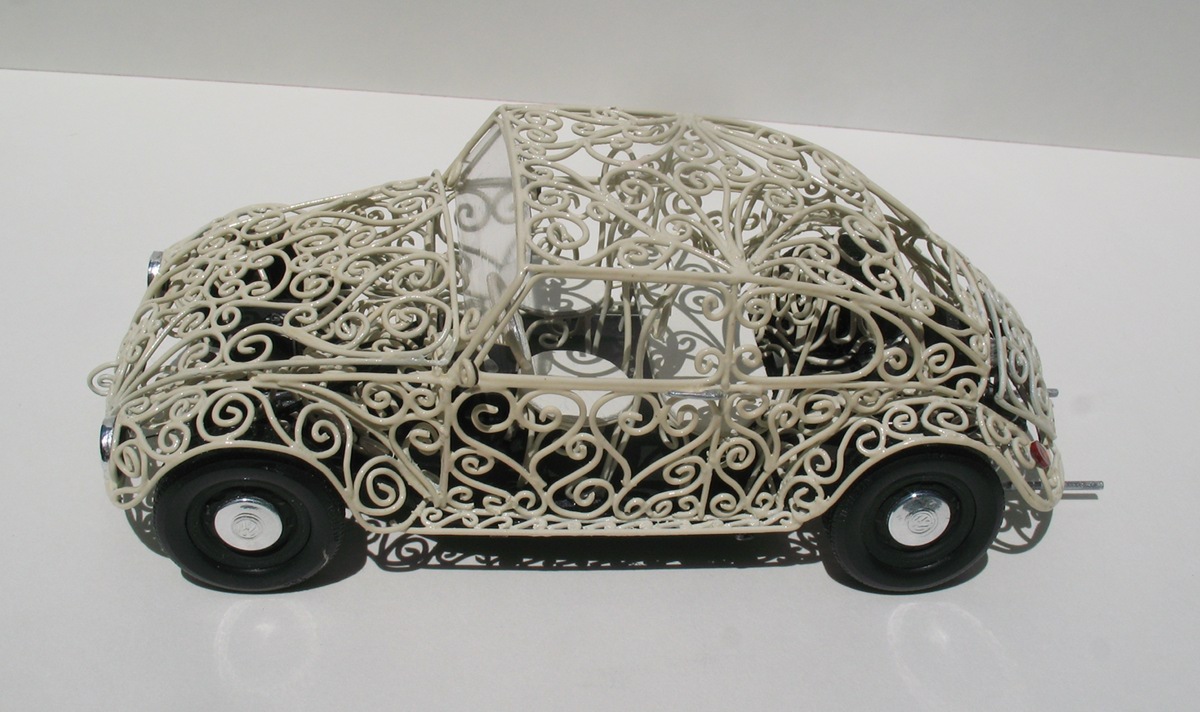 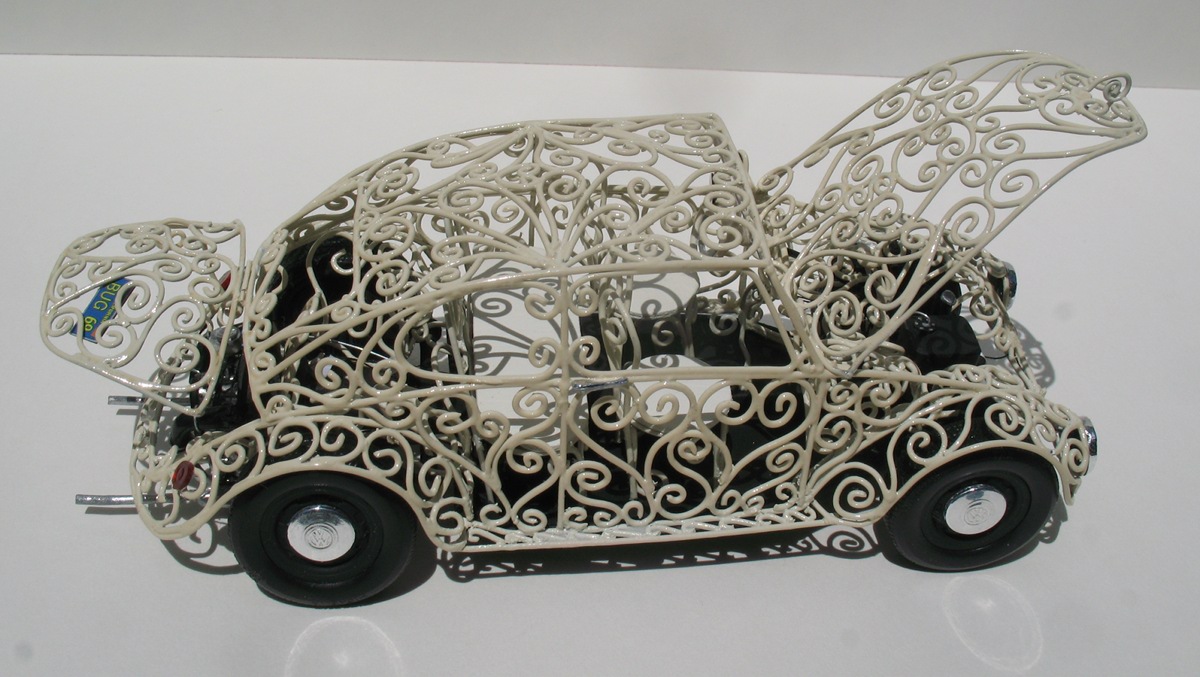