How many can spot a Lamborghini with just a glance? Many car fans would tell you that they had the infamous white Lamborghini Countach poster on their wall as a kid. Back in the late 1980s and early 1990s, Lamborghinis were the ultimate dream machines and they still are to this day. The Diablo succeeded the Countach and excited Supercar fans everywhere with its sleek and modern style. The mid-engined Diablo debuted in early 1990. It came with a 492 bhp 5.7L V12, went from 0-60 in 4.2 seconds and had a top speed of 202 mph. The roadster version was introduced in 1995 and included a carbon fiber targa top. Lamborghini built only 200 of these beauties and the Diablo remains as an icon in the supercar world.

Revell did a nice job of designing and building the kit. This is the first Snap-Tite model I have built. I received it I was a bit nervous when I received it. But the more I thought about it, the more I realized that it would be more fun than anything. The Snap-Tite kits are easier to build-after all, they just snap together! The builder can spend the bulk of their time detailing their model. You can devote your attention to achieving a good paint finish and taking care of all the little details that require hand-painting, etc.

I chose to do this kit straight out of the box. I planned spending most of my time detailing the kit because I knew I would not be doing any gluing. The plan was to use the decals/stickers provided, but I also wanted to use a different color. Gray and black always go good together and I think it would finish nicely with the chrome which was left on the wheels. The body color is Tamiya spray TS-17 which is gloss aluminum.

The decals and graphics in the kit are actually stickers. This is much easier for younger or beginner modelers and they apply easily. I wasn't sure how these would fare under a TS-13 gloss coating, so I chose to place the stickers on the paint. (Note – Many readers will already know this, but when using Tamiya spray cans, it is crucial to spray a few very light mist coats on top of decals because they have a tendency to bubble when reacting with the clear coat.) The decals themselves are made very well. It is important to line them up correctly before applying them because when they stick... they really stick. Their adhesive is clear and strong-they shouldn't peel away with age and look great on a newly painted model. The emblems and side marker lights consequently apply nicely and don't require too much work. 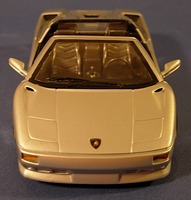 I painted the interior with Tamiya TS-38 Gun Metal to give the look of a dark gray leather interior that wouldn't overpower the simple aluminum body color. I sprayed the chassis with Tamiya TS-29 Semi-Gloss Black. I always like this on the bottom of the car especially when the entire undercarriage is covered which is typical with supercars. The one key thing with painting this kit is masking. There was a lot of masking done on this kit to give it a more detailed look, because there are so few pieces to paint individually. Many parts normally molded as separate pieces in Skill Level 2 or 3 kit are combined in a larger piece of plastic in this kit.

The windshield is one instance where a lot of masking was involved. The entire windshield is clear plastic. Now, you will notice that the body of the car runs up the A-pillar of the windshield and is the same color as the body. So, I masked off the windshield and primed and painted it to match the pictures and front of the box. I next needed to mask off the windshield wiper which was also part of the molded clear plastic. This was painted with flat black to the component on the real car. The masking came in handy on this car. I would run some tape along a part, slice out the area to be painted and use the brush to detail the look of it. I used this same approach for the seal on the roof, the vents on the bonnet and along the rear grill. The rear grill was a blessing for me. The whole car was painted with aluminum, so I masked the area around the lights and very carefully ran the brush right up to the trademark Lamborghini bull emblem and VT letters. It resulted in a little bit more realism to the rear side of the car. 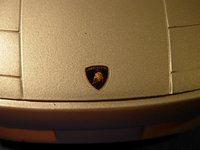 The instructions are well written and easy to read; they include a simple paint guide and each part is named. You can get as detailed as you like with hand paints and your imagination. I would recommend a Google image search to find the specific detailed looks of the car missing from the box and pictures and instructions.

This was a really fun kit to assemble. Modelers of all ages will enjoy this. Revell did a nice job designing and engineering this kit. I its simplicity and the coolness of the car itself. It was a perfect model for me to help get me back into the hobby after a long absence from it. For somebody who hasn't had the chance to build in a while or the person who is just starting the hobby, this is a perfect kit to try your skills. It was a wonderful kit to assemble and will look great on display. Thanks for reading and happy modeling. Special thanks to Revell for providing the sample.