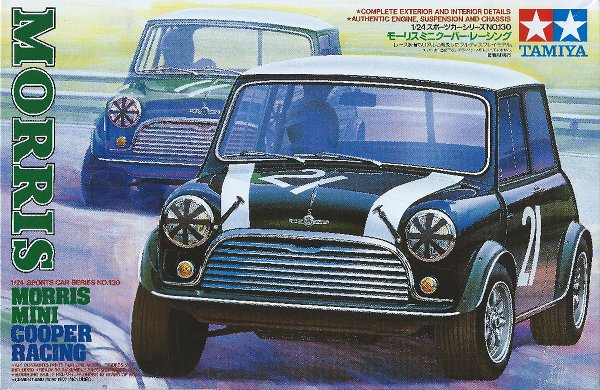 We are probably all familiar with the "Mini". They seem to be all over the roads here in the United States. The Mini looks like a fun little car that must handle like a go-kart and people dress them up in all sorts of ways. They have even been made famous on the big screen in movies like the Italian Job and Austin Powers. But the "Mini" that you and I are so used to seeing is a retro version of the Mini Cooper. 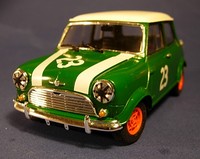 The original Mini Cooper was a compact passenger car developed in 1959 by the British Motor Corporation. It was designed for economy with 4 seats, a flat floor, and a small engine up front in a separate compartment. With a car only nine feet in length and less than four and a half feet tall there isn't much room for a substantial motor.

The engine was only 848 cubic centimeters and produced a mere 34 horsepower. The car could achieve a top speed of 71 miles per hour (I did a conversion using the 115 km/hr statistic noted on the instructions). As you can imagine, with a car this light and nimble, it was only a matter of time before people were racing them.

The famous British racer John Cooper decided to modify the Mini Cooper and thus the Morris Mini Cooper was born. The first version arrived in 1961 with a bigger engine measuring 997 cubic centimeters and 54 horsepower. Other improvements were made to the Mini Cooper race cars and motors. The biggest motor measured 1300cc and produced 91 hp. A subsequent, smaller motor at 1293cc was released but it wasn't very popular and was discontinued in 1965. 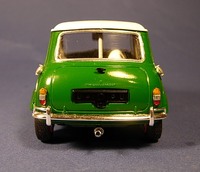 For starters, the kit is made by Tamiya. Their kits tend to be more expensive than some other brands. But you do get your money's worth in detail and accuracy. When I opened the box I was amazed by the body's diminutive size. I have seen Mini Coopers on the street and they are extremely small. So, it was only natural to assume that I had a 1:32 scale kit on my hands. But I assure you, it is 1:24 scale!

Tamiya does not slouch on quality. The instructions are clear and easy to read, and there is also a color chart and list of recommended paints (Tamiya's own, naturally). The color of each part is recommended at every step in the instructions. This helps at the beginning of a build so you can separate parts into their own color pile and paint them in batches.

The kit can be built in a few different ways, stock or the full race version. I wanted to build this car somewhere in between. The race version omits the bumpers, but I also liked the fender flares that were included with the kit. I decided to use both the bumpers and the fender flares. I loved the decals for this kit as well. I decided to add the numbers, but skipped the striped "Cooper" logo decals on the sides of the car. 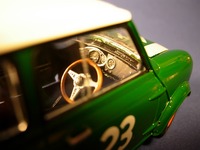 The engine is much smaller than typical engines you have probably built. Instead of a big brawling V-8, this little motor has only three cylinders, but that doesn't mean it lacks detail. The smaller parts for this motor contain a lot of detail and it looks very realistic when assembled.

Because this model is so small you won't need nearly as much paint! I painted the body with Tamiya spray can TS-43, also known as "Racing Green". I wanted it to somewhat resemble the the box top artwork but I also wanted a unique look with orange wheels. The roof was painted with a gloss white and I used semi-gloss black for seats. The engine was mostly aluminum with hand-painted details for realism.

One thing I like about Tamiya kits is their accuracy. With other manufacturers parts can be warped or not fit right. But with Tamiya, the parts always seem to fit together; every part lines up and connects with others very precisely. This helps to avoid fit and adhesive problems.

This was a very fun kit to assemble. It is a simple kit and it includes the parts needed for you to build the car any style you like. I highly recommend this kit for the quality of the finished product.

The completed model will be about half the size of your other models which catches the eye when it sits on your display shelf. So, have fun with it and make it unique to other cars in your collection. Thank you for reading, and happy modeling.