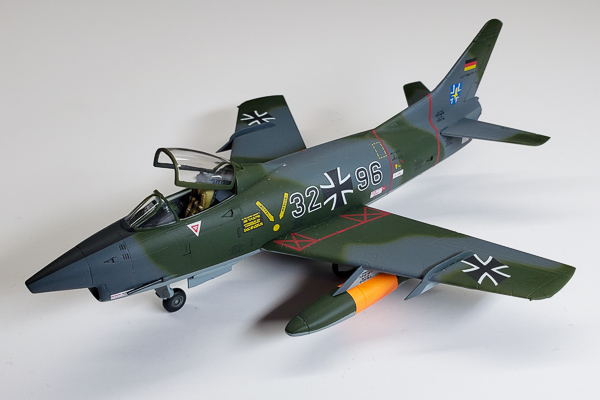 The Fiat G.91 is a small fighter-bomber design out of Italy that first took flight in 1956. The G.91 entered service with the Italian Air Force in 1961 and the German Luftwaffe shortly thereafter, with Portugal operating the type later on. While the plane did not have a large number of operators, it was a fairly common sight in the skies over Europe, with nearly 800 produced. The interesting design undoubtedly led Airfix to produce the first kit of the G.91 in 1959, which remained the only game in town for the next 40 years if you wanted to build a G.91 in 1/72. In 1999, Revell Germany released a new tool G.91, and it was much better than the Airfix kit. Now, though, we have another addition to the G.91 world, this time a new tool kit from the world of Meng.

Meng released their 1/72 Fiat G.91 back in 2012, and like with many models, I was excited to move this one to the workbench. The kit comes with just about everything you could need to build up a nice G.91, with just a couple of notable exceptions. The first essential replacement is an aftermarket seat, and I replaced the kit seat with a Pavla replacement. The other replacement is not necessarily essential, but as most of the Luftwaffe G.91s carried them, I grabbed some F-86 Sabre fuel tanks to replace the skinny tanks in the kit. With those changes, I jumped into the build.

Aside from the seat, the kit cockpit is quite nice, with raised details on the sidewalls and instrument panel. So I had no problem with just using these kit parts and giving them a nice bit of detail painting. Everything got a base layer of gray, then the sidewalls and instrument panel had their details picked out with various colors. The resin seat was a huge improvement over the kit seat, and I probably spent more time painting up the details on the seat than the rest of the cockpit all together. The seat did pose one problem though: when placed in the cockpit tub the canopy would not fit closed. It wasn't too high, though, so I just sanded the bottom off the seat a bit and planned to have it posed with an open canopy.

With the interior pretty much done the next step was getting the fuselage together. This kit comes with separate panels for the guns in the nose, allowing for either the R3 option with two 30mm cannons or the R4 option with four 12.7mm machine guns. Since the Luftwaffe aircraft were R3s, I glued the 30mm cannon panels in place and rushed it, resulting in a mediocre fit that would definitely require filler.

With those panels in place, I added all the cockpit bits and other interior necessities such as the exhaust pipe and wheel wells, tossed in a fair amount of nose weight (there's a lot of plane behind the main wheels), and glued the fuselage together. One area that I thought about updating, but ultimately didn't, was the intake blanking plate that results in a pretty short intake. Fixing that would have taken more work than I wanted to invest in this, especially seeing how much work I'd need to do on those side panels.

The resultant fuselage assembly ended up needing filler on the gun panels and the main wheel well insert, so I broke out the Tamiya Basic putty and went to work on those areas. The side panels were the most challenging as I had to work around a bulge for the gun barrel (luckily the gun barrels were separate). I also glued the nose cone and intake lip on at this point, and luckily both of those fit well, as did the wings. However, after gluing the nose cone on, I realized that I forgot to drill out the camera port openings on it, and that coupled with the filler on the side panels frustrating me, I relegated the kit to the shelf of doom, where it resided alongside far too great a number of other kits.

With the combination of a new dedicated modeling workspace and a global pandemic, I turned my attention to the shelf of doom and decided to finish as many of those as possible, with a goal of trying new things out where possible. Percolating up in the pile was the Meng G.91, and it just so happened I had an old Microscale decal sheet with some Luftwaffe examples on it. Thus inspired to see if 45-year old decals were still of use, the G.91 made it back on the bench with a vengeance.

As the goal now was to experiment with old decals rather than build the absolute best 1/72 G.91 that had ever been seen, my concerns over the filler diminished drastically. I still smoothed it out as much as possible, though, and attempted a bit of rescribing. I completely ignored the solid nose, and planned to just paint the openings black and call it good. That meant that the kit was dangerously close to the painting stage, so that's where I turned next.

That covered the basics, but another feature seen on Luftwaffe G.91s was the fluorescent orange-red bands around the F-86 drop tanks. I had a bottle of Vallejo's fluorescent red, so I thought this would be a perfect time to see how good it was. I started with a base of white and slowly built up the fluorescent red. I wanted to have it be a faded look, which has the color shifting more towards the yellow, and I was curious if building up the color slowly would yield that effect. I was pleasantly surprised when it did just that, and when compared to the dense application I did on my Folland Gnat, the differences are significant.

After a clear coat, it's time to turn to the decals. As noted earlier, I chose to use an old Microscale sheet that had decals for F-4Fs, F-104s, and G.91s, all in Luftwaffe markings. The original sheet is so old, the sheet number is two digits. I'm pretty sure the sheet I have is one of the original 1975 releases, as it has been in my decal stash since the 1980s, so this experiment will definitely be an interesting one. Concerns I had right off the bat was having the decals explode immediately upon dropping them in water, the decals not sticking, or the decals sticking too much. So I used a couple of the decals I wouldn't need as a test. Surprisingly, none of those issued showed up and the decals performed amazingly, being thin and reacting well to my classic standby of Solvaset. So, on they went to the model.

One nice thing about the Microscale sheet was that it included a lot of stencils in addition to the basic markings. The kit decals had the bare minimum in that regard, and I am a strong proponent of adding stencils to models. They just add that tiny bit of extra detail that cranks up the realism factor. As this sheet dates back to the 1970s, it was designed for the Airfix kit and I was worried that the red wing walkway markings (which are all but useless in the kit decals) wouldn't fit. But apparently Airfix got the wing shape right in their kit, as they matched up nicely with the Meng wing. Another thing that really impressed me with the Microscale decals, given their age, was how the clear film just disappeared instantly. Even without the addition of a setting solution, the pressed-on decals looked painted on. I am now definitely rethinking my thoughts of getting rid of all these old decal sheets I have.

With the decals on, the Fiat was looking good. So good that I decided to replace the kit gun barrels with some metal tubing. That, plus the addition of the landing gear (follow the instructions here, people, as that main gear is a weird one), the seat, and the canopy, and I was calling this one (mostly) done. I have the drop tanks on the inboard pylons but nothing on the outboard pylons, yet. I left the nubs for now, as I'm planning on adding either rocket pods or bombs, once I find the right kind for 1970s Luftwaffe aircraft. If I can't find any, I'll slice those off and add mounting details, but I'm sure I'll find something in the spares pile.

Despite languishing for nearly ten years, and lacking the nose clear ports, I am pretty pleased with how this little Fiat turned out. The Microscale decals really impressed me, and with new Phantom, Tomcat, and Crusader kits out there, I think I'm going to dip back into those old sheets and build up some US Navy planes soon.