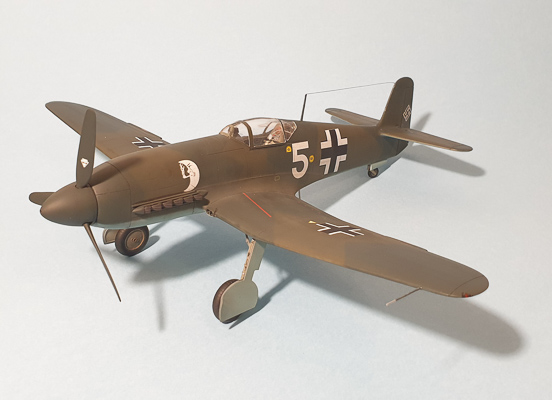 The He-100 is an enigmatic aircraft. Developed in-house by Heinkel, "Projekt 1035" applied lessons learned from their previous design, The He-112, to lighten and strengthen the airframe, ease construction and still reach the 430MPH top-speed design goal. Several prototypes were built, the first flying January 1938, all proving the success of the design. Unfortunately, it was the He-100's Heart (it's Daimler-Benz 1175hp V12 engine) that conspired against the aircraft achieving successful production. By the time the He-100 was ready for production, Messerschmitt was claiming every engine it could from DB for their 109 and 110 production lines. This left very few Daimler-Benz engines for other applications, even the ones that showed such promise.

Heinkel built an estimated 20 airframes, which were put to use by the Minister of Propaganda, to inspire the German forces, and bring fear to the RAF. The handful of He-100s were flown to different German airfields, each time sporting different paint schemes to give the illusion of greater numbers of aircraft, and also appeared in issues of the Nazi Propaganda magazine, Der Adler. The tactic worked, and British intelligence featured the "He-113" in their 1940 report on aircraft of the Luftwaffe. There were even spurious reports of He-113's encountered and shot down throughout the early years of the war. After their use as propaganda machines, the airframes were based at Heinkel's factory at Marienehe, flown by company test pilots as Heinkel's own personal air defense unit. The fate of these aircraft is unknown.

An interesting branch of the He-100's history is that in 1939, with war beginning in Europe, Heinkel was allowed to license its design to axis powers. Russia purchased the surviving prototypes, and Japan bought 3 early production models, a license to manufacture the aircraft, and a set of the necessary jigs and tooling. The aircraft made it to japan, where they were assembled and test flown for the Japanese Naval Air Force. With the European war ramping up, the tooling, jigs and plans never made it to Japan, and It is assumed that the 3 airframes were disassembled for reverse engineering.

The He-100 quietly disappeared into history, a bombing raid destroying many factory documents, and all the technical drawings. No original examples of this aircraft exist, only a full-scale, non-flying replica at the Planes of Fame Air Museum in Chino, California, USA.

He-100 or-113? Numbering convention would have had the new fighter being branded with the universally unlucky 13. Ernst Heinkel thought his company would have better luck selling the design with a less superstitious number, so the He-100 was born.

Special Hobby's kit (SH32009) was released in 2008 and comprises all you'd expect from a limited run kit. A surprisingly small number of injection-molded plastic parts, a clear injection molded single-piece canopy, 3 resin parts and a small fret of etched metal. Kit supplied markings offer any of the known "He-113" paint schemes, with several different nose insignias and unit codes. The plastic parts all contain very fine recessed panel lines and plenty of flash.

The build was fairly straightforward, thanks to limited information of the real subject, the kit contains basic representations of airframe details. This blank canvas allows the modeler to apply a bit of "Imagineering" to busy things up. I started with the cockpit, adding wiring and plumbing, tanks and other cockpit-looking things.

A coat of MRP RLM 02 was applied, details were picked out in various colors and everything was weathered. Airscale placard decals were placed around the cockpit, and HGW Luftwaffe textile seatbelts were assembled and draped over the seat.

The fuselage was assembled and the first of many carving/filing/filling/sanding sessions began. I wasn't happy with the kit representation of the under-nose air intake, so I carved out the opening, and added plasticard vanes. Comparing the profile of the kit's nose cowls and spinner to photos of the real aircraft, it seems that Special Hobby made the whole front end a bit too chunky looking. I took to the plastic with some 80 grit sanding sticks, whittling down the profile to make it more streamlined. My representation isn't perfectly accurate but looks a lot sleeker than what's supplied in the kit.

The trailing edges of all flight controls were overly thick when assembled, so again out came the 80 grit to carve away offending plastic. on the flaps, this also meant reprofiling the wing root fairings. Between all the usual filling and sanding, and the extra reprofiling carried out, most of the kit supplied surface detail was lost. I scribed panel lines, drew on rivet lines and added various panel and fastener details as necessary.

Whilst affixing the canopy, I managed to crack the rear section. I considered vacforming an entirely new canopy but was growing frustrated fighting against what I had originally thought would be a straightforward build. I ended up gluing the crack, sanding and polishing the canopy, and fairing it into the airframe as best as possible.

The bare airframe was given a coat of Mr Surfacer 1500 Black, to check for imperfections, and act as a black base for the camouflage. MRP's RLM 65, 70 and 71 were used to depict the standard Luftwaffe splinter camouflage scheme. Weathering was kept to a minimum as these aircraft saw very light use.

Kit supplied decals were used for all markings, I chose #5 as it appears in some of the propaganda pictures of the time, and the smoking moon looked funny to me. Fortunately, the decals gave no resistance, and settled down well with Microsol. Everything was given with a coat of MRP Matte Clear.

The track of the landing gear as supplied looks too narrow to my eyes, in hindsight, it wouldn't have been a huge task to re-drill mounting holes further outboard, instead shortened the gear legs, chopping a few mm from the top of the struts, to make the issue less visually obvious. Brake lines and clamps were added to the gear legs, and the wheels were glued on with the camber shown in pictures of the real thing.

Pitot tubes, aerials and other fiddly parts were affixed, and this Propaganda Fighter was complete!

Heinkel's 113th design was a handsome looking aircraft, abiding by the adage that "if it looks right, it'll fly right". One thing that did surprise me upon completion, was how small the He-100 was, being similar in size to the Me109, and considerably smaller than the FW190.

I would like to have the He-100's Japanese cousin, the Kawasaki Ki-61, side by side in the cabinet, so I guess it's time to track down one of the Hasegawa kits. Watch this space!