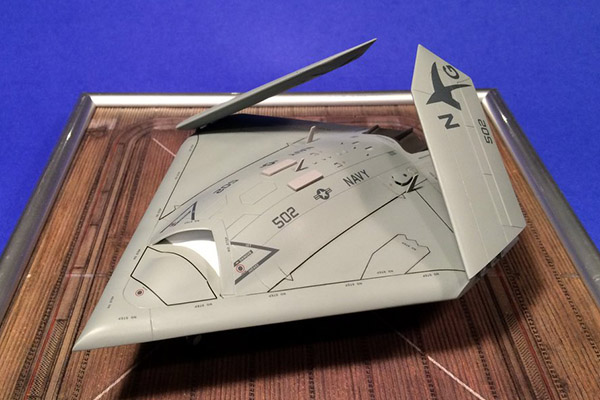 There is no question that Unmanned Aerial Vehicles - or UAVs - are a major component of future US Naval aviation; with several types in service and others in the development stage. The Northrop Grumman X-47B unmanned combat air vehicle (UCAV) is a demonstrator for a stealth carrier-born strike bomber. Similar in concept to the cancelled A-12 Avenger II, the X-47B first flew in 2011 and made its first catapult launch at sea from the USS George H.W. Bush in May 2013. In July 2013, the X-47B completed the first arrested landing of a UAV on an aircraft carrier at sea; again on the USS George H.W. Bush. In April 2015, the X-47 became the first aircraft to undertake a fully autonomous in-flight-refueling transfer from a contracted Boeing 707 tanker. It was intended that the X-47Bs would be retired and delivered to museums in 2015, but the Navy decided to keep them airworthy. Northrop-Grumman hopes to develop the demonstrator into a full combat ready UAV to compete in the Navy's UCLASS (Unmanned Carrier-Launched Airborne Surveillance and Strike) program.

While UAVs are not everyone's cup of tea, the X-47B is quite a historic type with many firsts to its name. Therefore, I was glad to see Platz issue a kit of the type.

Molded in grey plastic, the X-47B is made up of two large top and bottom parts for the main section of the flying wing and optional folded or extended outer wing panels spread out over two runners. The panel lines are recessed and very crisp. Some ribbing detail is included in the landing gear and weapons bays and the landing gear detail is impressively stout, as required for a carrier aircraft. Two JDAMS are provided for the weapons bays, but some cutting will be required if one wishes to close up the bays. A well printed decal sheet is provided for the two X-47B demonstrators along with some additional, what-if wing art.

Thankfully, for the sake of the reader - and this modeler - construction did not start with the cockpit. With the main airframe consisting of two large halves, assembly is simple, but it may be best to pre-paint the white areas of the large nose intake. I did so, and while my seams are seemless, they are good enough for me. Once the halves are assembled, construction continues with a choice of extended or folded wings. I chose to build mine folded and assembled and painted the wings separately. The fit of all parts is excellent, and the only filler I used on the model was where I carelessly removed the top fuselage half from the sprue. A little gap-filling CA fixed my carelessness. I decided to close the bomb bays, and after cutting off the seven mounting pins per door, they fit fine. I also chose to close the spoilers, but it appears that they should be slightly cracked when the wings are folded.

I decided to leave off the engine exhaust and all of the smaller domes and antennas to ease painting. The wing and fuselage section were painted Tamiya Medium Sea Grey and then glossed with Aclad Aqua Gloss clear acrylic. The Aqua Gloss sprayed beautifully, but was difficult to clean out of the airbrush. Sadly, after use, a full strip down of the airbrush was necessary. I was impressed with the shine I was able to achieve with two coats of the Aqua Gloss.

The most difficult part of the project was applying the decals. They are of excellent quality - easy to apply, easy to move on the model, and tough - but there are tons of them. I chose to build AV-2 aircraft 502 which was the first X-47 to land and take off from an aircraft carrier and the first to conduct in-flight refueling. The wing walkways must be pieced together from individual sections. Sadly, I'm not a puzzle expert, but I got there in the end. Oddly, an Air Force refueling marking is provided. Photos show it on AV-1, but not AV-2, so I left it off. After applying too many "No Step" decals, I breathed a sigh of relief.

During a break from decals, I painted all the small antennas Tamiya Sky Grey and the engine exhaust using Testors Metalizers. The small parts were added and a coat of Alclad Matte Klear Kote dulled down the finish.  The large wheel bays, and landing gear parts, were painted Mr. Colour Off White and then it was time for final assembly. The landing gear are very sturdy with some nice detail that looks excellent after a light wash was applied. Everything fit perfectly, the only caution being to get part B11 located correctly, and pretty soon I had a finished drone on my desk. The Platz kit looks just like photos of the X-47B and is impressively large in 1/72 scale. Oddly, photos show that the tail hook was left exposed on AV-2, but Platz depicted it covered. You would think that a stealth bomber would not have an exposed tail hook hanging out, but on at least one of the airplanes that appears to be the case.

Platz's X-47B is a simple and fantastic kit of this historic air vehicle. Highly recommended for those that need a break from canopy masking.