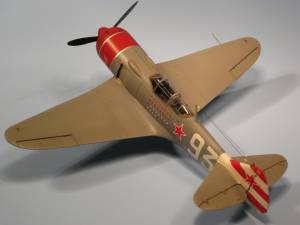 Perhaps the most attractive Soviet fighter of its generation and noticeably faster than either the Mig-3 or Yak-9, the still predominantly wooden Lavochkin La-7 was developed directly from the highly successful La-5FN, of which over 10,000 were built.  By adding a more powerful radial engine under an aerodynamically cleaner cowl, better high altitude performance was achieved along with a 20mph increase in top speed.  Firepower was increased by adding a third ShVak 20 mm cannon to later La-7s. 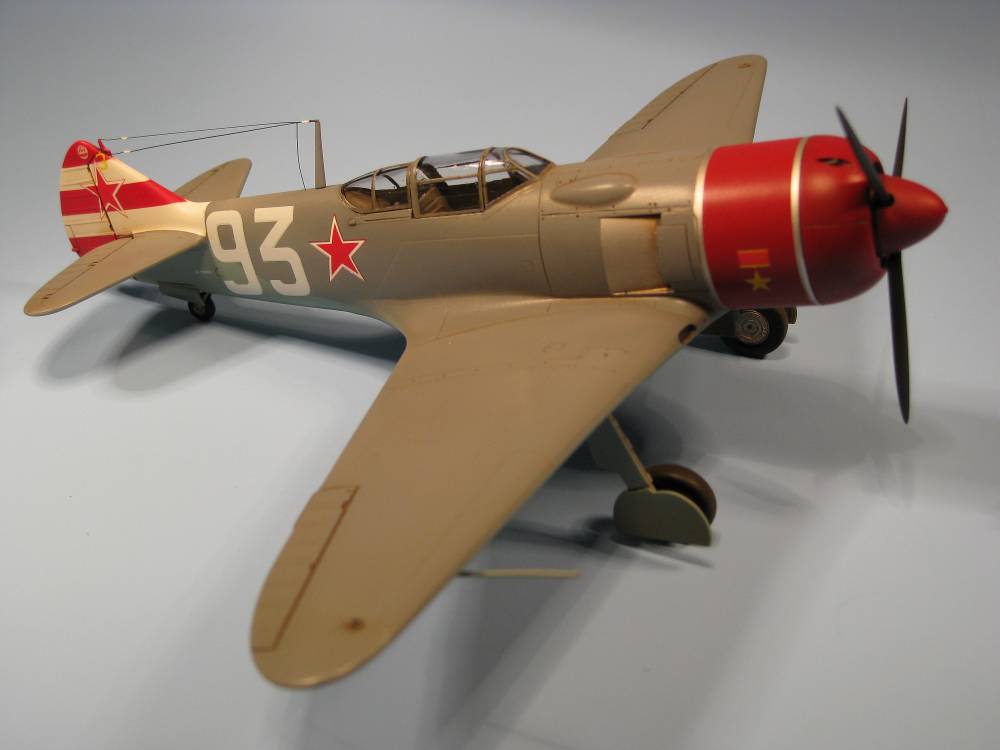 Despite some poor low-speed handling characteristics, the La-7 was well liked by its pilots and earned itself a superb combat record by the end of the war. Some of Russia's top aces flew them, including Ivan Kozhedub, three time hero of the Soviet Union, the number one allied ace with 62 victories, and the only Soviet pilot to shoot down a Messerschmitt Me-262.  Total production of the La-7 amounted to nearly 5,800 aircraft.

As with other Eduard Weekend Edition kits, the La-7 is a fairly simple proposition and a straightforward build. The kit consists of only three sprues – two light gray and a single transparency.  One sprue holds the single piece lower and single piece upper wing halves, as well as some undercarriage and cockpit pieces.  The other grey sprue has the two fuselage halves, the two-piece horizontal stabilizers and cowl pieces, as well as props, wheels, gear doors, pilot’s seat and instrument panel. The clear sprue has the three-piece canopy, armored glass and gunsight. 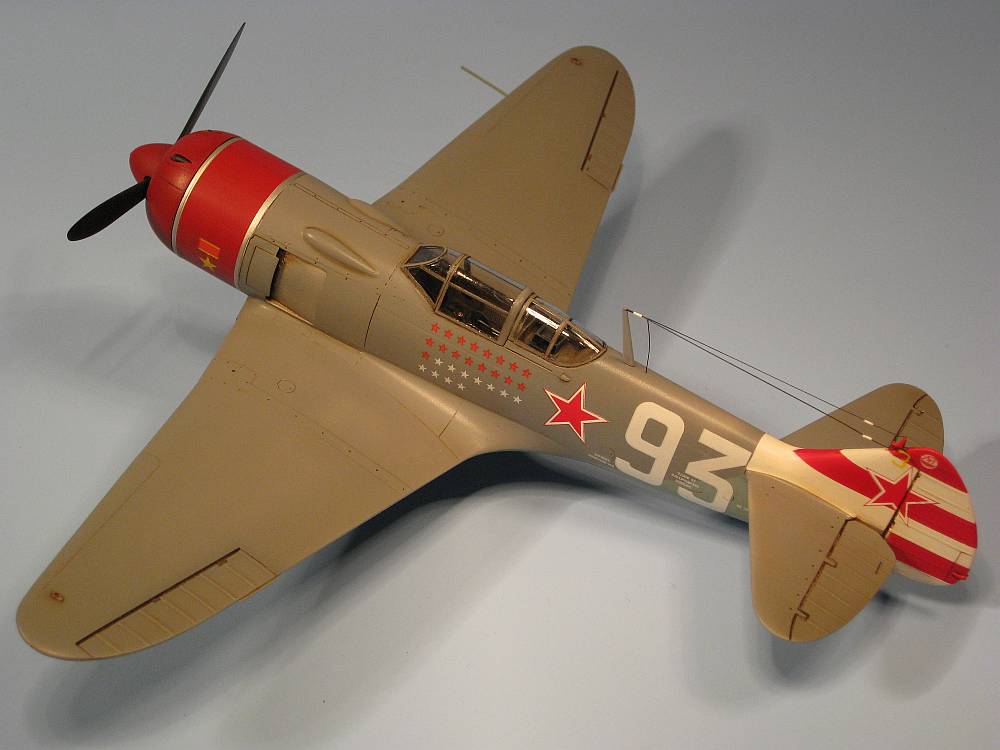 As with all Eduard kits, the surface detailing is quite beautiful. Despite the use of more aluminum than the La-5, the La-7 was essentially an all wood aircraft and the smooth plywood outer skin is nicely represented. Access panels, stiffener plates and wheel well details are all well done, with nicely represented fasteners. All control surfaces are all molded in, so some minor surgery will be required if you want to show them displaced.

Engine detail is none existent, which matters little as you’ll not see much of it behind the cowling anyway. 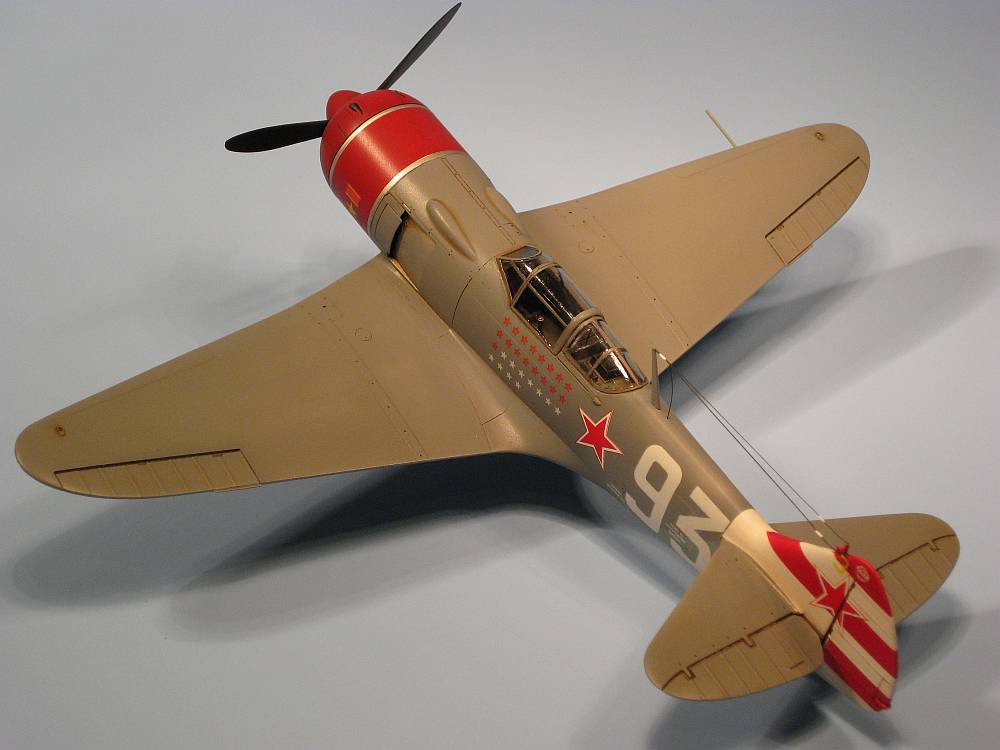 Eduard offers the builder two choices for the instrument panel – raised instruments faces or a decal.  The former is pretty basic and adding individual instrument decals would be a challenge for most experienced modelers.

Painting instructions and decals are provided for a single La-7 aircraft, ‘White 93’ flown by Lt. Col. S.F. Dolgushin of the 156th Fighter Aviation Regiment (IAP) based on the Eastern front in 1945.  The horizontal red stripes and Russian Star for the fin and rudder are included on the decal sheet but may prove tricky to apply.  Decal registration is perfect. 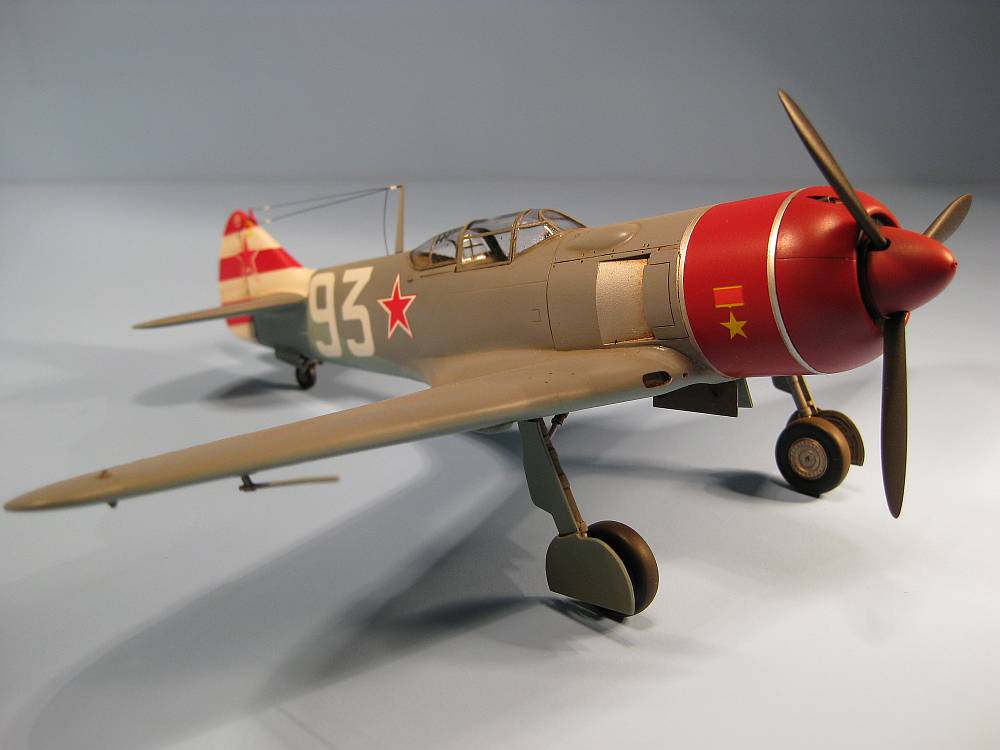 I nearly always start a kit from the bottom; that is I focus on the undercarriage and gear doors before moving on to engines, props, cockpit and then the main body assemblies.  Each main wheel on the La-7 is in two halves and these were lightly sanded on a flat sanding board to assure good alignment before gluing. The main gear legs, the tail wheel assembly and all actuators had minor molding lines and these were removed with a fine scalpel.  I find that a light brushing with Tenax liquid cement helps tidy-up the legs and struts by dissolving any minor scratches or burrs.

The main wheels and tail wheel were painted Floquil engine black with a hint of white and blue.  The hubs were painted Floquil Silver.  The legs and struts were painted light grey with chrome oleos and actuators. A few coats of thinned Future prepared them for a wash with Burnt Amber oils.  Note: a lot of people say there is no need to thin Future, but I find that the orange peel effect can be avoided completely by mixing it 50:50 with 99% Isopropyl alcohol.  Once the wash had dried, dry brushing highlighted surface details on the legs and actuators. Finally I dirtied the tires with a light misting of a red/brown mix. 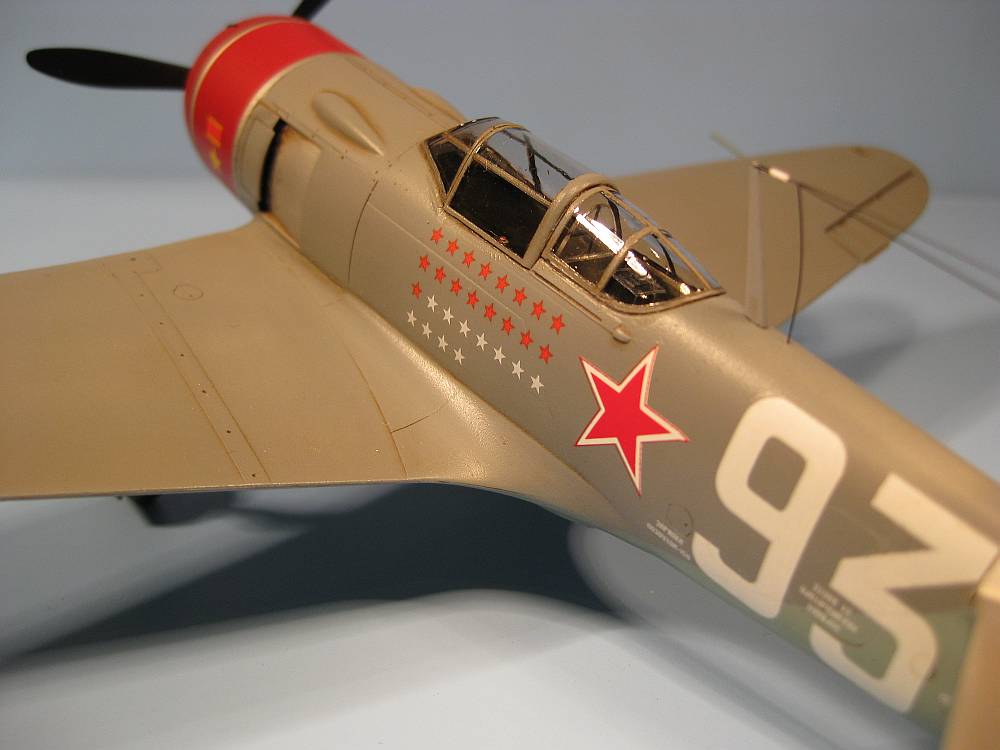 The wheel wells were next.  Five components are supplied; two air intake ducts and the front spar which forms the rear wall of the bay, and a small hydraulic reservoir and electric box. The air ducks required a little prep work, but other than that assembly was quick and easy.  The underside of the single piece upper wing provides the wheel bay inner surface detail, although this is fairly minimal.  The wheel wells were painted light grey and given the same Future/Burnt Amber wash treatment as the other undercarriage components.  The hydraulic reservoir was painted yellow and added last.

At this point I tidied-up the two wing halves and glued them together.  That was it for the wheels, wheel bays and wing assembly - time to move on to the engine and propeller. 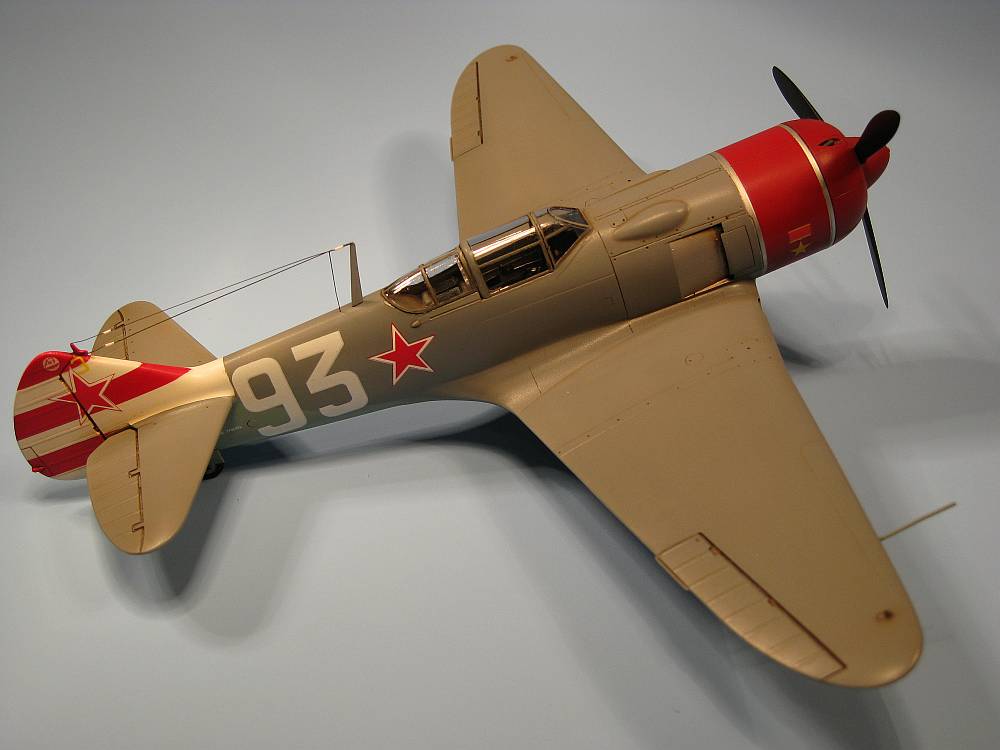 Well, there isn’t actually an engine.  The kit has a single front cowl piece and an insert for the single piece engine cooling grill assembly.  The latter is rudimentary but looked okay with a coat of black and dry brushing to pick out the subtle detail. The propeller assembly consists of three nicely cast blades, a spinner and back plate. The blades needed a little cleaning up, but looked nice after a coat of Floquil Engine Black. The spinner and back plate were painted Insignia Red and given the usual Future/Burnt Amber wash.  I used Floquil Silver to pick out the propeller hubs molded into the back plate.  It’d hard to see once the individual blades are mounted, but it’s there.  I also painted and washed the front cowl ring as I had decided to fit this after the rest of the plane had been built and painted.  I discarded the kit gun muzzles and replaced them with small diameter plastic rod that had been drilled out and painted Gun Metal. 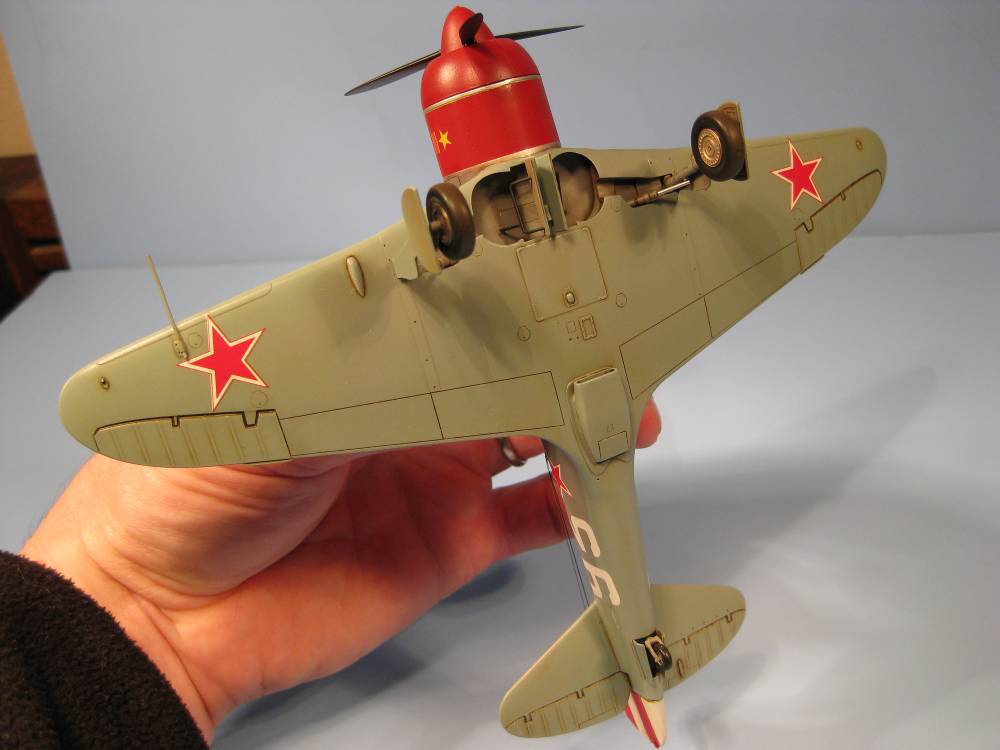 I started building the cockpit using only the pieces supplied in the kit. The interior structure, sidewalls and floor were first painted a light interior gray followed by a few light coats of thinned Future.   Once the Future was well dried, I gave everything a Burnt Umber oil wash.  I then highlighted any raised surface detail and framing with dry brushing.

Sidewall components are limited to a basic throttle quadrant and mixture controls and what looked like an oxygen regulator.  I had to add levers from spare photo etch as none existed on the kit components.  All the parts were painted flat black and dry brushed to highlight whatever detail existed.  Lever knobs were highlighted in red, white and wood colors.  I sanded off the raised instrument detail on the panel and paint it gloss black.  Once that was dry, I applied the single piece instrument decal. 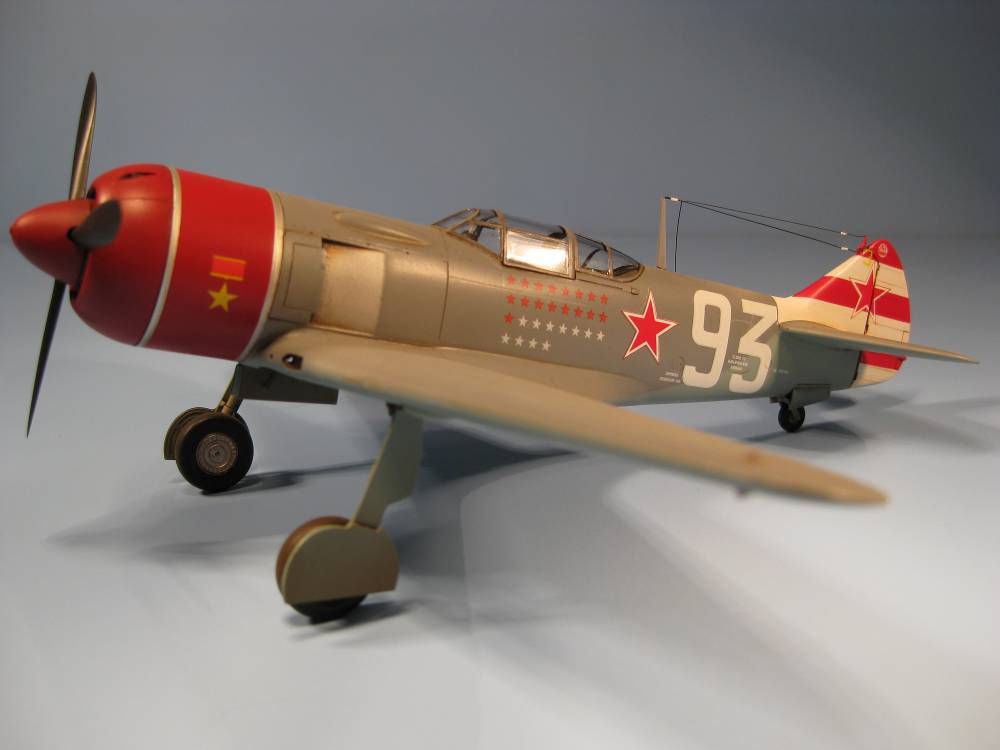 At this point I really wasn’t very happy with the way the cockpit looked and decided to cheat a little and add some extra cockpit detail from an Eduard La-5FN photo etch set that I picked up at my local hobby store for a few bucks.  I wasn’t intending to do this but the Eduard set had seen better days and was on sale.  The set provided some great two piece trim wheels, placards, rudder pedals/straps, a number of sidewall controls to complement the kits components and.. (wait for it).. a fabulous instrument panel with film, and a seat harness.   All of these Eduard components were carefully cut free and painted flat black prior to fitting.  I added cable runs and push rods from thin solder wire for better effect.  Glass varnish was used to simulate glass on the instrument faces.

Once the cockpit was completed it was easy to close-up the fuselage.  I decided not to add the tail wheel leg at this time as they always seem to get knocked off at some later point.  The fit of the two fuselage halves was excellent and only a little filler was required.  Once dry, I fitted the wings to the fuselage.  The fit was generally good, although a few gaps around the leading edge required filling with thick cyanoacrylate and finishing with Bondo. Finally I fitted the tail planes, which did require a little more filler than both the fuselage and wings.  A gentle sanding with wet and dry was sufficient preparation for a prime with Floquil gray primer. 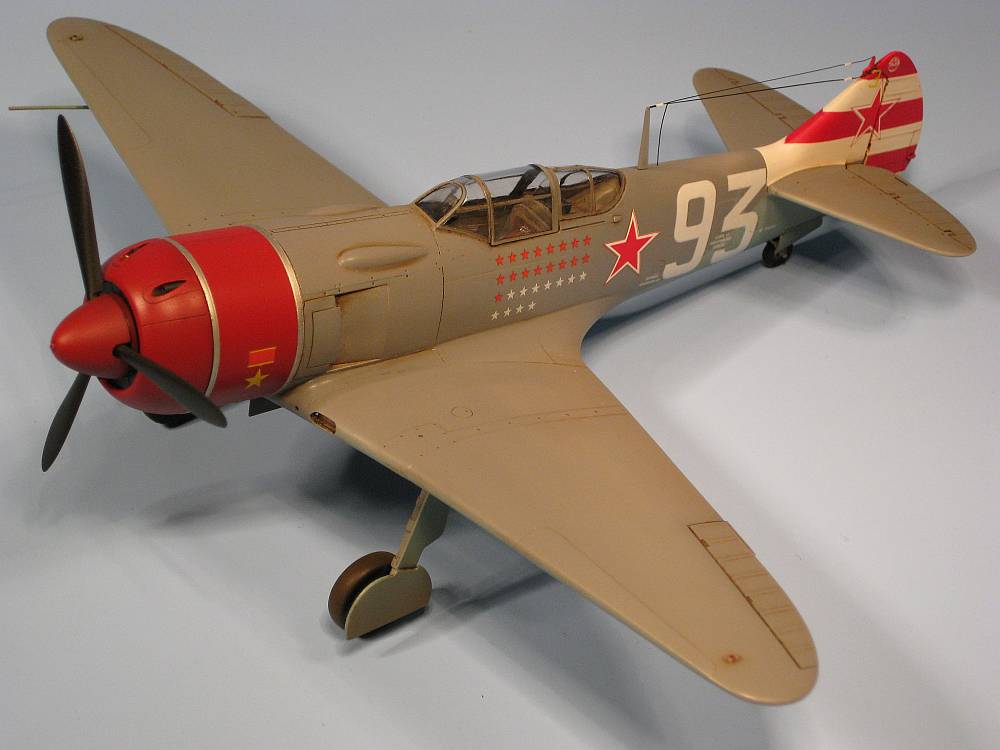 I had intended to show the model with the canopy open, but the fit of the center piece wouldn’t allow me to do so.  It was a little on the small side and didn’t sit correctly over the aft section.  If I had had the time, I would have vacuformed a replacement. I therefore glued all the canopy components in a closed position and, when dry, masked everything with Tamiya tape.

Lt. Col. S.F. Dolgushin’s ‘White 93’ had a simple two color blue/gray color scheme which was easy to apply using Model Master enamels.  I had already decided not to use the tail decal and painted the red/white stripes beforehand, along with red cowl covers.  Chrome was used to highlight the cowl straps and aluminum for the exhaust plates.  A few coats of Future preceded decaling.  Once the decals were dry I added a few more coats of Future.  Finally I washed the kit with Burnt Umber oils and let it all dry overnight.

It was now time to add all the details.  On went the tail wheel and doors, main gear and doors and the front cowl section, followed by the propeller itself.  I then add the cannon barrels, pitot tube and aerial mast.  Once everything had set I gave the whole model a misting of Dullcote.  The last task was to fabricate the twin aerial wires.  I used stretched black for the wires and stretched white sprue for the insulators.  Once the wires were loosely attached, a glowing match tightened the wires.

This was a fun build.  If it hadn’t been for the Eduard PE cockpit and my decision to paint the tail rather than use the decals, I reckon the kit could be built in a weekend.  It was the most enjoyable build in a while and got the juices going for a Yak-9.

Thanks to Eduard for the review copy.