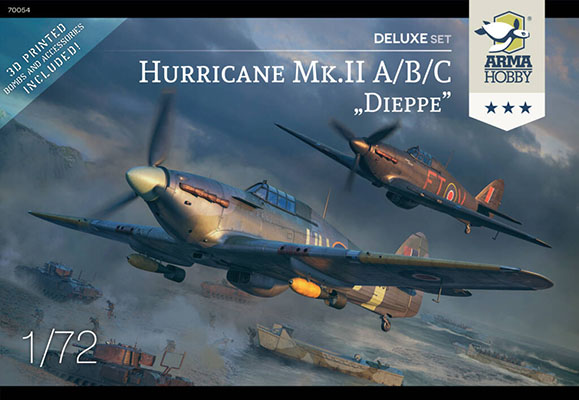 Commemorating the 80th anniversary of Operation Jubilee - the Allied landing on August 19, 1942, in Dieppe in France, Arma Hobby announced a new Deluxe Set - the double 1/72 scale Hawker Hurricane Mk. IIA/B/C kit with eight marking options from Operation Jubilee and additional high-quality 3D-printed details. Pre-sale is already underway, shipment of the model kits to customers will begin on August 19, the anniversary of the Dieppe landing.

A double kit in a special edition commemorating the Dieppe landing (Operation Jubilee). Edition with additional 3D printed accessories. The kit is available for pre-order, shipping of orders starts on August 19, 2022. 3D accessories are part of the set and will not be available separately.

Variants of painting and marking:

During the Blitzkrieg in Europe in the spring of 1940, the Hawker Hurricane was the main RAF fighter. In the fall, during the Battle of Britain, it fought on a par with the famous Spitfire. In the following years, thanks to various improvements, it played an important role in Africa, the Mediterranean and the Far East, but in Western Europe it was delegated to slightly different activities: night, sea, and bombing.

Hurricane Mk. II is a fairly simple modification of the original version of the aircraft, using a more powerful Rolls-Royce Merlin XX engine with a two-speed supercharger. This increased the fighter's performance so much that the installation of more powerful weapons became feasible: 12 machine guns (version B) or four 20 mm cannons (version C), as well as the bombs. These aeroplanes appeared in greater numbers in RAF squadrons in the spring of 1941. Relatively quickly, experience showed that the version with cannons is doing well, but the version with machine guns, even twelve, already has too little firepower, so it was delegated for bombing tasks, and called "Hurrybomber".

Although in 1942 the plane had its fighter glory behind it, the last great day of the Hurricanes on the European Front was August 19, 1942 - Operation Jubilee - an Allied landing on the beaches of the French Dieppe. As many as 8 squadrons equipped with these planes took part in it. Hurricanes of five different versions flew there: Mk.IIA, IIB, IIC and the Canadian-made Mk.X (converted to the Mk.IIB standard and essentially identical to it), and even three Mk.IA veterans. Their task was to attack ground targets, destroy German artillery and support the attacking infantry. These missions were so important that squadrons without ground-attack training, including the night ones, were also delegated to them. However, the basic principle that allowed for the effective use of the advantages of the versions was kept: Hurricanes with machine guns bombarded, and those with cannons - fired at targets. Although the entire operation was unsuccessful, the Hurricane squadrons fulfilled their tasks with devotion, fighting over the Dieppe beaches since dawn, mostly performing three assault operations each with the forces of entire squadrons.

After the fights over Dieppe, Hurricanes were no longer used en masse in combat operations in the West, but they still remained the core of the forces in Africa and Burma, they also fought effectively on the Eastern Front, where almost 2,000 of them were sent under Lend-Lease.