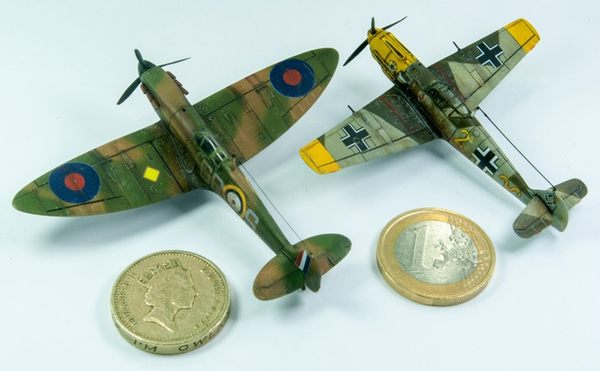 There are times when someone has an idea, but no way to see it to fruition without a lot of capital. This is one of the reasons the site Kickstarter was created. Someone has an idea for a "product" (which could mean a whole plethora of things), work out some of the logisitics then post their idea on "a site" (in this case, Kickstarter) to see if others think their idea would work.

This time, it's for a new model company creating items for two worlds: wargaming and modeling in general. Beacon Models includes one of the people from the now-defunct Wingnut Wings model group in its mix so it has decided to tackle The Battle of Britain, this time in 1/144 scale. Not only can the models be made for wargaming, but they're also "proper" (such a bad term) models that can be enjoyed by themselves, on your modeling shelf and in competitions.

They have lots of ideas and plans for the future, but some of it hinges on what they accomplish with their first "Kick". For this first go around - what Beacon Models is calling The Few Part 1 - they have tackled the early mark Spitfires (Mk.I and Mk.II) along with the Bf 109Es. There are additional items as well, best viewed on their Kickstarter page.

So show this new company they are on to something. If you can't pledge a lot, try to pledge something. We definitely want to see Beacon Models succeed.