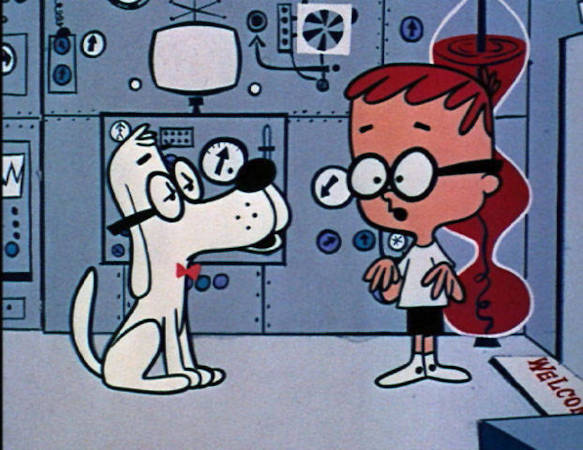 If I Went Wayback...

Regular readers know Young Scott began to model in plastic, all by himself - no parental help - as of his 5th-grade birthday party. The model given to him then was the Monogram® B-58 Hustler with Authentic Weapons Pod Drop!

From time to time, nowadays, I slip into a daydream. I borrow Mr. Peabody's unique invention and pay a discrete visit to Young Scott. Being a 'Rocky & Bullwinkle' fan as he was - and is now - Scott knows all about the 'WayBack Machine' and would not be the least surprised at Old Scott traveling back in time to see him. Then, as now, we endorsed the outcome of Mr. Peabody's adoption suit. After due consideration, the Judge handed down the decision: "This Court sees no reason why, since a boy can have a dog, a dog can't have a boy!"

So I return to that room where Young Scott, as privileged Oldest Child, can sometimes for awhile get away from his two younger brothers. Of course he'd be working on the single kit he has at any given moment. Paints at hand are from Testors® basic general use set, enamels in little ¼-ounce square bottles, borrowed from Mother...his only tool an X-Acto® No.1 knife borrowed from Father.

What shall I tell him? That someday he'll have a 'stash'? Sure...but what about its size? Over decades, it's expanded so large that Old Scott can't conjure up the energy to count it precisely...but knows it's around five hundred... Best not try to stretch Young's mind that far.

How about this: that he'll enter "Dark Ages" where he won't, can't, model? He wouldn't think, back Then, that the University would steal every waking extra moment...that after graduation, there'd be first marriage, first and second and third jobs...divorce...a two-year move to Chicago, where our parents came from. There'll be a decade-long diversion into balsa kit building, flying them behind glow engines with radio-control equipment. That the Club he'll fly with will abruptly disband..and only then, would realization set in that plastic modeling was really missed, and eased back into... Well, maybe a highly-redacted version would be safe to share...including good news such as modeling would become more affordable than on his 50-cent weekly allowance...and the second marriage is continuing to go really, really well...

Shall I tell him then how easily I found and joined an International Chapter of a plastic modeling club...whose existence Young Scott never even imagined? That after attending but two meetings of that club, I went to their yearly Contest-and-Show...another thing never imagined...and there, prominently in view on the very first table of the very first vendor by the door of its Dealers' Room... Monogram's B-58 Hustler with Authentic Weapons Pod Drop!

If he somehow managed to get his head around such fantastic news of the Future, could I go on to say that I'd join a second club, associated with the famous world-class Museum of Flight? That some of my model builds would become part of Museum displays people from all over the world would see?

Finally, dare I tell of the advent of little computers, on everybody's desktop and even in their pockets as the essential new kind of telephone, communicating instantly with everybody around the world? Dare I tell Young One that someday, he'll post his own musings and experiences in a sort of 'virtual space' that's nevertheless real enough for modelers everywhere to see and respond to? Hard to believe that he'd believe much of that... but it surely would not be out of line, nor endanger the Future, by encouraging Young Scott to keep on with modeling, just as he's doing...that it's all for the good for him to "Build What You Want, The Way You Want To..and Above All, Have FUN!"