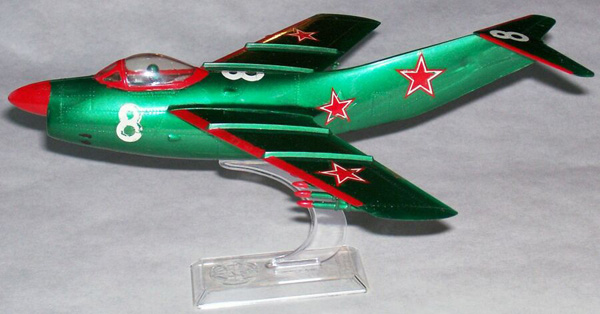 Introduction: Apologies for my absence here

It would be nice if web sites like Internet Modeler were showered with money so columnists like me could just write a bit, Now and Then, and never have to worry about paying the bills. However, our Esteemed Webmeister-Leader gives me no hope of thinking this will happen any time soon. We'll have to keep muddling through, and contributors like me will have to stay content with compensation by the immense Life Satisfaction Fulfillment we get by humbly offering our Words of Wisdom to our Devoted Readership.

As far as the bills go: I'm a near-stereotypical example of the vagaries of the modern American economy. I do computer support for a living. Or did, until almost exactly four years ago, when the economy 'tanked', and the ranks of Information Technology workers were severely cut back.

Fortunately, I hold a unique blend of professional competencies to sustain me past unemployment compensation. I'm the only IT guy who's Schwinn School certified. I went back to working at the bicycle shop of my Now-and-Again employer Mike Solberg, whom I've known since community college days.

Then, after three years -- or exactly one year ago, as I write this-- I returned to computer technical support. It's work I love to do, and its compensation is adequate (given that not everybody in IT can aspire to be Microsoft millionaires...) But it's been a very demanding year, with a lot of new systems to learn and a whole new set of nearly two hundred 'users' to cater to. So this past year, the energy still left after the work days has been only about enough to cope with routine household maintenance chores, and maybe to attend monthly meetings of the NorthWest Scale Modelers and the Seattle Chapter of IPMS.

Now, after this first year, I'm pretty much 'up to speed' and am finding renewed energy to work at my hobby. My build rate's creeping up. I've made contributions to the theme displays the NWSM put into the Museum of Flight. And now I'm trying to make a comeback here; it's my New Year's resolution. Let me offer the following thoughts about the nostalgic fun I had at Christmas. I wrote it up for the Seattle IPMS newsletter. I hope you still enjoy my writing, and promise a new essay before the Ides of March!

Christmas is all about children. I certainly ought to know. Hard though it is to believe sometimes, I have eight grandchildren to send presents to, with a ninth due shortly.

Way back Then -- when I myself was one of those children Christmas is all about -- the thing that distinguished Christmas season for me, from a modeling standpoint, was that it was the only (and very temporary) time when I had MULTIPLE kits. The rest of the year passed with my holding perhaps one, bought with that week's allowance. On my birthday, I might -- if I was very lucky, and Aunt Daisy was thinking along the right lines-- have three. But Christmas time, what with the family Christmas Eve gift exchange, visiting paternal grandparents, and Santa leaving things under the tree, Christmas morning might see me with as many as six! 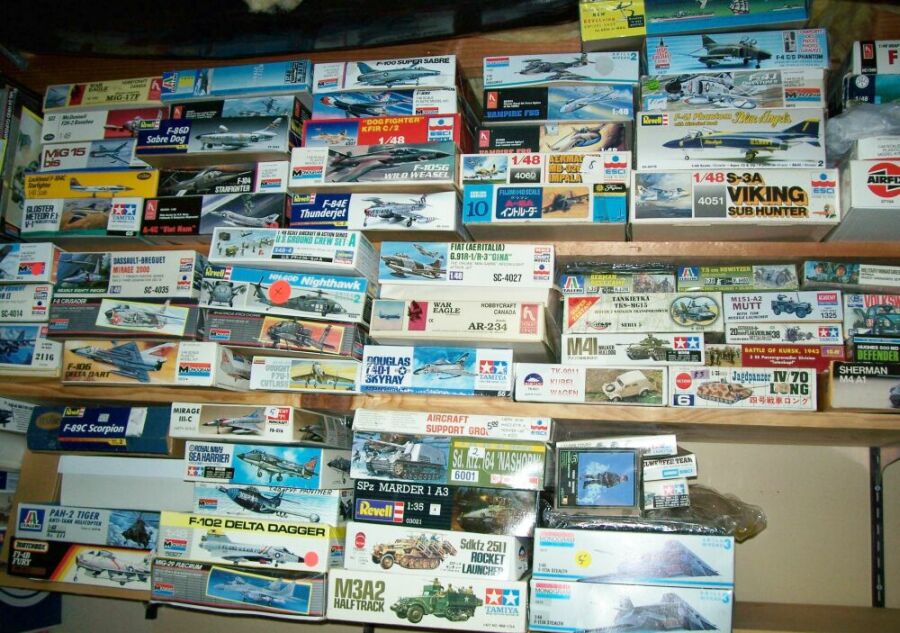 Nowadays, my stash is so large (and with me year round) that I can scarcely recapture the feeling of wealth a set of Christmas kits gave me Then. In modern times, I've told friends, siblings, and my wife Sandra, not to even bother to try to find kits for me, because it's unlikely that they could come up with something that a) I would be interested in building, that's not b) in my stash already. Sometimes Ken Murphy ignores that advice. He ignores many of my admonitions, having known me for -- Heaven help us both -- nearly forty-five years. So he sometimes actually DOES come up with a kit not covered by clauses a) and b)...

Those instructions not to buy kits, however, haven't been extended to my three stepdaughters. Number One stepdaughter and her family are currently in Moscow -- not the one in Idaho! -- while her husband works for a big international financial analysis firm. Sandy and I sent off a box early in December with trinkets and books for their four little girls, things we hoped Moscow shops didn't have.

Early in the evening, just before Christmas, when we just settled in for dinner when the doorbell rang. The USPS delivery man was there with a big box, tied in white tape bearing lines of blue Cyrillic characters. I can't read these at all, but they certainly indicated the source. When we opened the box, there were two other boxes inside. The small one had a set of custom lathe-turned Christmas ornaments, reminiscent of the ornate domed towers of the Eastern Orthodox churches and the spires of the Kremlin. They weren't identified by a trademark, nor did the box bear any company logo or identification. I think they were bought from a craftsperson at a Moscow street market. 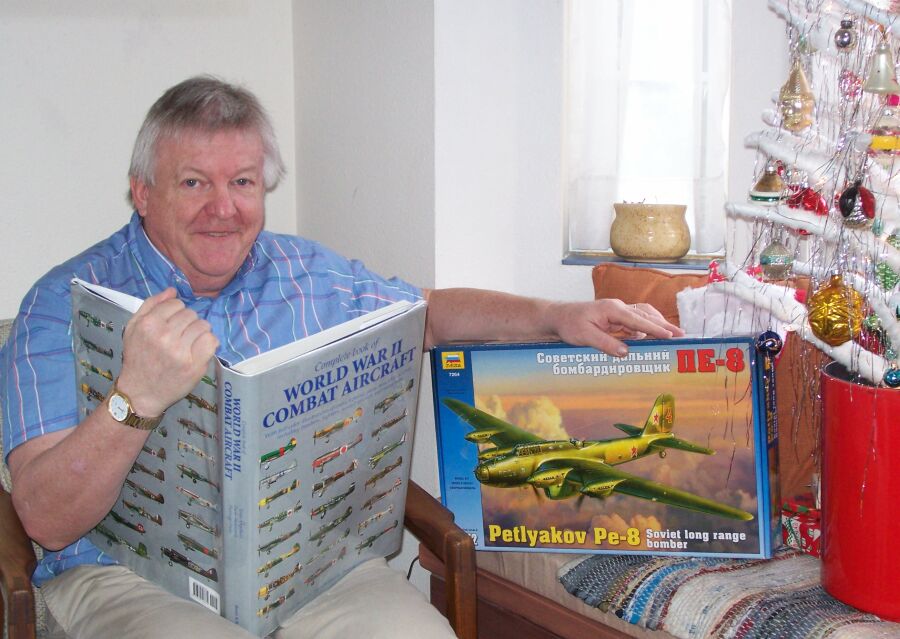 A bigger box rattled suggestively, and as I pulled away the packing material, I briefly recaptured that childhood feeling of Christmas gift kit wealth. It's far and away the biggest model airplane box I've ever had: Zvezda's Petlyakov Pe-8. (Quick trip to the Hurricane Bookshelf: it was the U.S.S.R.'s "B-17 equivalent", the only four-engined bomber made and deployed by the VVS in World War II. Not made in large numbers, but historically significant for demonstrating the growing capability and sophistication of their aircraft industry... and the first plane they sent to bomb Berlin.)

At the beginning of January, I went to the NorthWest Scale Modelers meeting and was given a second kit of this holiday season. Will Perry thrust at me a box almost as big as Zvezda's.

Way back Then, I built exactly three kits of Russian (or Soviet) airplanes. There was the incredible, grotesque Aurora "Famous Fighters" MiG-19 a.k.a. Yak-25, which I've written about previously, and its strange lines that I now realize are derived from that Focke-Wulf 'Luft-46' project, which many of you have been modeling. Then there was the old Hawk Models MiG-15. I distinctly remember my first visit to Will Perry's house to see his stash, which has been collected so assiduously, far longer than mine has been, and dwarfs mine by an order of magnitude. He's got some five thousand, plus! 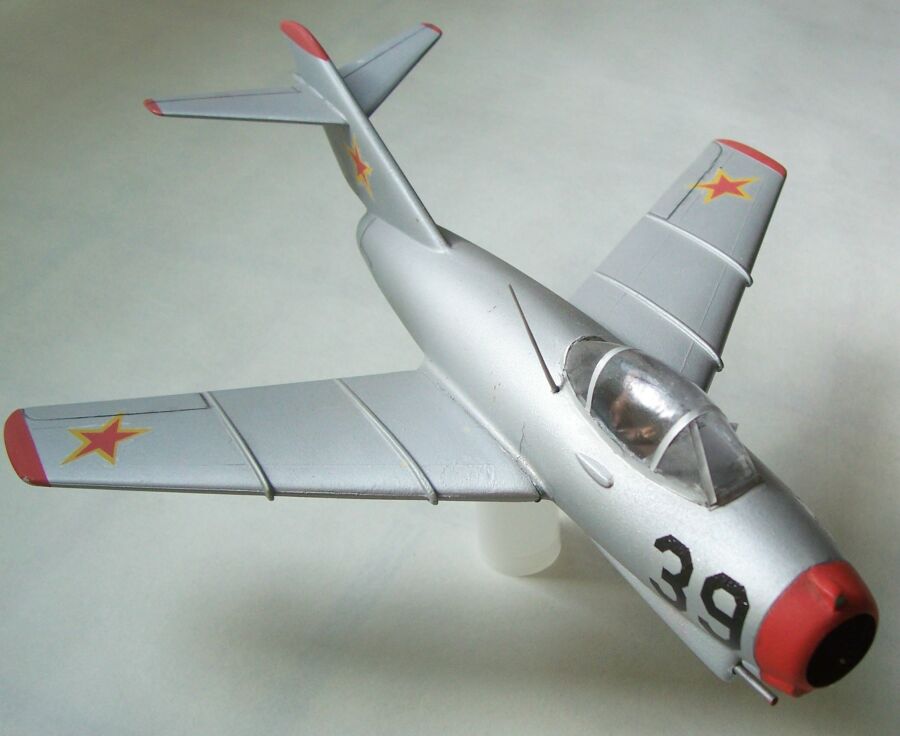 Our conversation wandered back into old kits, of which he has a huge variety, and their lack of scale fidelity, compared to modern ones, so carefully researched and engineered. Still, the old kits certainly gave us, back Then, the sensation of scale modeling. As Will phrased it, looking at the Hawk kit: "That looks just like a MiG-15!"

At the NWSM meeting: he said the 'Playfix' (the Western export name of some really obscure old Russian marque, now long gone) kit of the Russian TU-20 bomber is terribly inaccurate, even as 'box scale', more-or-less around 1/100th. Not much detail, but the moldings are fairly clean, and there are enough parts for a representation of four large turboprop engines with their eight-bladed contra-rotating propellers. I'll build it sometime, for a lark, and see if Will says "That looks just like a TU-20!" 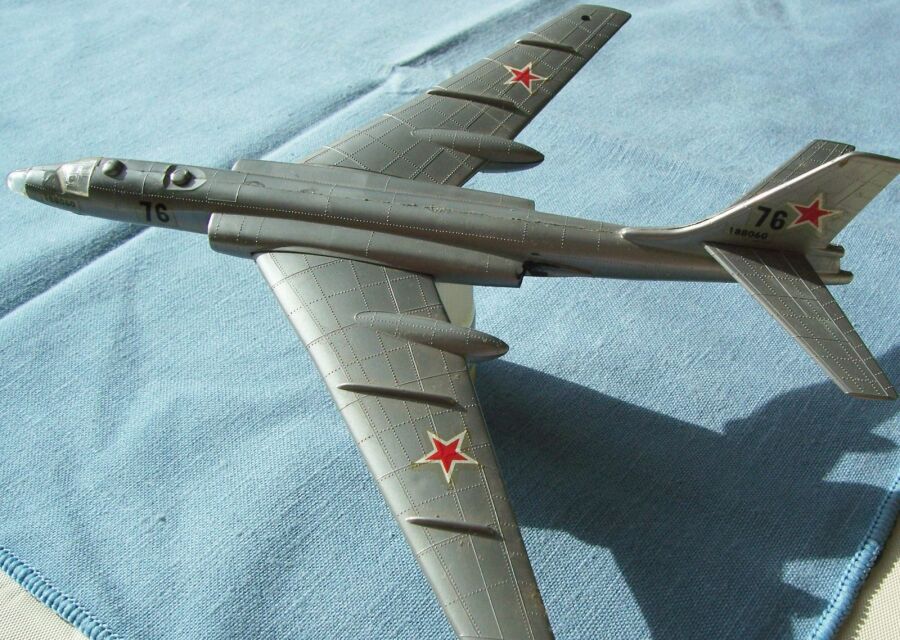 The last Russian/Soviet airplane kit I built way back Then, as the Free World confronted the Red Menace... (Aging Baby Boomers! Remember those phrases?) ...was the Monogram 'Forty-Niner' (named after the price in pennies of each kit in the series, another bit of history Aging Baby Boomers remember...) Tupolev 'Badger' bomber. That was another 'box scale' --what, 1/150th?-- and has only a handful parts. I distinctly remember building it on a summer afternoon. Unique among my builds, it was the only one made while staying at my grandparents' house in Grapeview. I went there for a week's visit several summers during my early teens, and by happenstance, the day before one such visit, I'd acquired the Monogram kit. It was all I could do to muster enough patience to greet my grandparents properly, walk with Grandfather all around the property, engage in proper conversation at my grandmother's lunch, and settle in with my modest suitcase of clothes and things. Finally, by mid-afternoon, my grandparents resumed their usual routine, and I was free to amuse myself for a couple of hours. The complete build of the Badger was the result.

You know still in the Now I have a soft spot for old kits, and keep an eye out at every contest, show, swap meet, or sale at Skyway Hobbies. On last October's trip to the Vancouver, B.C. contest, one of the vendors had put out a 'FREE' box of what he must have regarded as next-to-useless accumulated modeling detritus. It included a partly-started, badly brush-painted, re-issue of the Monogram kit. Of course, way back Then, I never painted a whole model. It was molded in the right color plastic, right? Anyway, the work so far was even rougher than my own attempts with back Then: wings glued together askew, parts missing, gaps where the parts had been ripped off the sprues. But how could I possibly walk away from it? 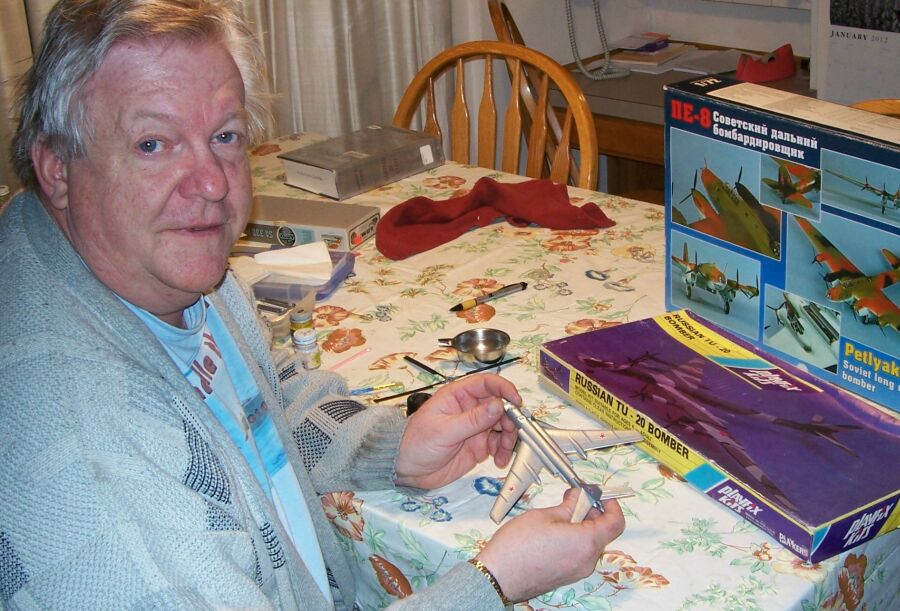 Since my return from the Dark Ages, I'd heard about paint strippers, but had never tried stripping paint from an existing model. Here was a good test. As my fellow modelers claimed, brake fluid really does strip paint without harming the plastic underneath. I put the plane together again, did some filling on the underside and underneath the horizontal stabilizers, and painted the whole model with my airbrush and some fine silver lacquer. What technical advancement-- but just as much fun Now as the kit gave me back Then. Actually, I've spent about three times as long on the new one and am not quite done. I won't go much further because it is, after all, a pretty rough and crude affair; I'm doing it just for the nostalgic value.

In contrast, my new gift kit is by a first-rate modern company in Russia, no longer part of the Union of Soviet Socialist Republics. (How the Red Menace has receded...!) The parts count is as astronomically high as the old kits were low. The detail work, quality of the engraving, scale accuracy, and perfectly screened decal set are all as good as anything I've seen in the Now.

But it will have to wait a bit. I have assignments. The centerpiece of my work bench right now is the old Airfix kit of the Puma helicopter, and this build is not nostalgic. To the country, it'll be my first helicopter build. It's my assigned contribution to the NorthWest Scale Modelers' new exhibit about the Falklands/Malvinas War.

It's a very long time from the Christmases I enjoyed way back Then, but between my stepdaughter and her husband, and my friend-and-colleague Will Perry, I've managed Now to recapture some of the thrill of Christmas way back Then. I wish all your fellow modelers might share it!