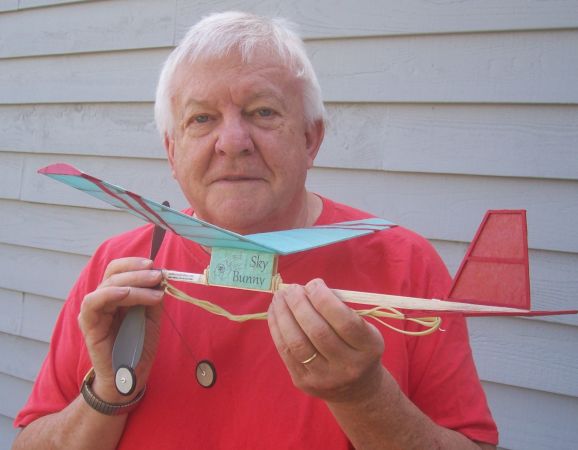 NOW, Out of the Past: a Rabbit?

No, no: this isn't about Bugs Bunny, who turns 80 this year – popular though he is among not just modelers...but everybody! Can there be anyone on the planet – can there be anyone in the Milky Way Galaxy (assuming 'they' monitor our television broadcasts...) – who doesn't know "What's up, Doc?"

No, it's about our building models – and not just plastic – since Way Back Then.

Every modeler I've asked about it – and many a non-modeler, too – admits to playing with flying models. I've got very faded, fragmented memories of a toy airplane made of wire and covered with thin pink cloth...silk?...that was supposed to fly, that a couple of neighborhood kids had...any of you with clearer memories shed any light? Anyway, my memories are perfectly sharp and clear about the North Pacific® snap-together balsa gliders and rubber-powered prop planes: the Star Flyer, Sleek Streek, and Skeeter. Pretty much anyone – even the clueless little kids we used to be – could get one to fly, at least minimally. (Not just here, either: the Newsletter Editor for the Seattle Chapter of the IPMS confirms the North Pacific planes were available across the pond in Jolly Old England.)

I remember getting into building plastic kits next, but those were mixed in with occasional attempts to build stick-and-tissue flying scale models from Comet, Top Flite, Sterling, Guillows, and others. They looked fabulous in their Boy's Life and other magazine ads, but the reality – which we had no way of appreciating Back Then – was that they only were intended to be SOLD. OK, perhaps it was possible to build them to completion; some of us did...but fly them? The most I'd get in the backyard from my Comet Mustang or Guillows FW-190 was 10 feet of uncontrolled aerial stagger, before a crash broke off a wing or crunched the nose. Only with hindsight – and a large dollop of modeling information, absorbed since Way Back Then – do I understand that kind of 'performance' was not my fault. Experienced flying modelers – I knew none Then – could make such kits work only by replacing kit contents: decent light but strong balsa and Japanese tissue replacing the cheap 'sheet iron' materials provided...then properly winding up actual high-quality 'contest'-grade rubber-strip motor loops, of properly calculated size and length...discarding the barely-stretchable brown rubber band tossed into the box, as if as an afterthought!

We should have been offered models in between those two extremes, Way Back Then. If they were available at all, I never saw them. But I was used to buying models from the local discount drugstore, within walking distance, and sometimes in downtown Lakewood's variety and department stores, when Mother took me with on her shopping trips. That's not at all the same as going to a hobby shop, but I had no way of knowing, back Then, what such specialized shops carried. I only have one memory, ever, of being taken to one of these shops by my parents. That's where I got the Top Flite catapult-launch all-balsa "JigTime" Navy Cutlass glider. I didn't go to hobby shops regularly until after moving to Kent, when I learned to drive and got 'real' wheels, a Honda Sport 65.

The in-between models I'm talking about had stick fuselages and light open-framework tissue-covered wings and tail feathers. Several such models existed Way Back Then – I know now! – and a few are still in production and available.

In that category physically – if not temporally – is Bill Warner's 'Sky Bunny'. I first encountered it in Model Builder magazine in the late 80s...way into my Now. His series of articles for monthly publication were to guide novices through all the steps to increasingly sophisticated and advanced success. The series was entitled "Hey Kid...You Want to Build a Model Airplane?"

He started with the old Sleek Streek, which with minor modifications under Bill's guidance can be made to give quite decent flights. The series worked through other simple designs from there, with Sky Bunny in the middle. The series was so popular that TAB reprinted it in a set of three sequential paperbacks. (See the cover here of the middle volume.)

Bill Warner's motivation was not chasing after prizes in high-tech Free Flight contests, but having fun and sharing the ability to have such fun with novice modelers. Would that I had been one of these modelers, Way Back Then!

Oh, well, better late than never. I took a couple of side trips into building light, simple stick-and-tissue rubber-powered Free Flight models, while learning to build flyable R/C glow-powered sport planes. I was startled when a simple Cavalier from Flying Models actually flew the way I wished my childhood efforts had, so I continued to dabble...and still do.

I've done a bit of proselytizing among the kids, not as much as Mr. Warner, by teaching a Basic Aeronautics class at an elementary school, having the kids build AMA Racers (aka Delta Darts) and flying them. Those Darts really work, pleasing the kids and their teachers...'biting' them with the 'Balsa Flies Better!' bug. This softened my disappointing memories of those flying scale model crashes back Then.

The July issue of Model Aviation Magazine described the latest Sky Bunny Postal Contest. It's been held for a few years but this year it was to "Remember Bill Warner", who died in March. Around the country – around the world – all were welcomed to build a Sky Bunny and fly it over the weekend of September 5th- 7th and send in their best flight time, perhaps including a photo. "Postal contest" is a phrase dating from the 1920s – I toss this explanation in because none of us are that old! – when scattered modelers wrote up their results on paper and sent them in via stamped envelopes. (The day's coming in the Not Too Distant Future when little loved ones will ask us "What are letters, envelopes, and stamps?") In the Now, organizers were just emailed; flight times were compiled much quicker; results were posted. You can look up results at the AMA if you care to. A similar contest is planned for next year. No prize money, no 'Major Awards': a simple, nostalgic event for even 'ancient' modelers like me to have fun.

If you wish to share this fun...take a break from plastic modeling...make a nostalgic trip...do something anti-Pandemic-y...or just show yourself that your modeling abilities are Now – even if they weren't back Then – up to this modest challenge, join the 'happening'.

And maybe – just maybe – there's a child in your life that you'd like to steer away from your failures Way Back Then...into building and successfully flying a model airplane Now. Maybe you need to ask, "Hey kid...you want to build a model airplane?"

Note that a kit, once made by Peck Polymers®, is again marketed by Wind-It-Up Enterprises®. Free plans are also available, and there's not much to scratch-building the Bunny – certainly nothing beyond the reach of you SuperGlue-Wielding Masters of the No.1 X-Acto Knife. You might even still have a bit of balsa and tissue squirreled away...but new materials are readily available.

Hmm...having flown the Bunny, should I again tackle one of those old Comet or Guillow's scale models? Watch this space for developments.

Before signing off, it's all to easy to let the multitudinous jumble of things that fill our lives crowd some out. I let my contributions to this site lapse for way too long. Now, with the Pandemic, I'm re-thinking my priorities and promising myself to do a new Now and Then monthly...a small recognition that there still is an Outside World, with readers like yourself in it, that really deserve attention...instead of obsessing over never-ending news of what those malevolent little C-19 specks are doing!

P.S. Those of you whose interest in such a project leads to shuddering at the memory of the ghastly glues, impossible-to-handle tissue, and model airplane dope we struggled with – chill out! Watch for my Addendum to be posted here soon! --SHK