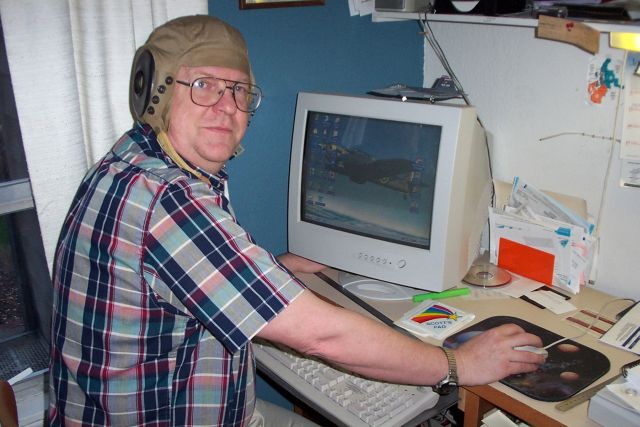 OK, that little ditty has been dancing around my head since I first started thinking about writing this second essay about model paints in my life. Now that I've inflicted it on all you readers, I feel better. (See Mark Twain's "Punch, Brothers, Punch!" for a more thorough treatment of this phenomenon.)

The Wigwam stores are long gone, but during their existence in the mid-60s, this cut-rate bargain-basement department store "chain" (?) could just barely afford to do five-second commercials on late-night local television. The commercials consisted of a couple of still shots of their shelves, crowded with their eclectic selection of cheap merchandise, then one of a storefront, just during the playing of their little ditty.

Wigwam is significant to my personal story for two reasons. First, it became, along with A&H Drugs right next door, the substitute in Kent for the Thunderbird drug store in Lakewood. When we moved, I found modest model kit displays in these two stores, and they were close enough for frequent visits, even before I could drive. The two stores were next to the East Hill Safeway, where Mother did most of her grocery shopping and where I would get my first ‘real' job as a boxboy, after having a paper route.

Wigwam's prices were discounted a few pennies more than at A&H Drugs, so I'd look for kits there first!

The second point of significance was that Wigwam is where my father bought a lot of paint. 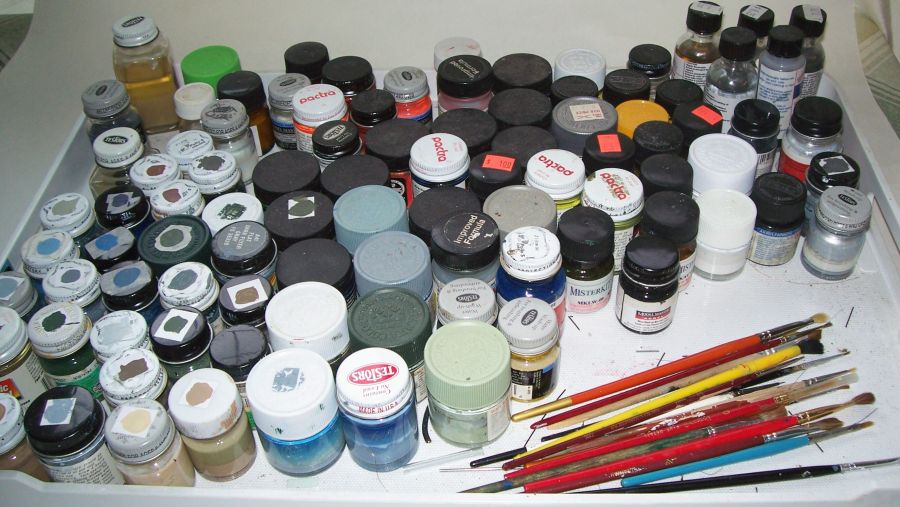 When recalling the smells from my youth, a few were nice. Freshly cut Christmas trees, my paternal grandmother's spice cookies, and Play-Doh. I still play with Play-Doh, although now I don't attempt to sculpt anything from it. I use it to mask irregular mottle-type camouflage schemes for airbrushing my modern airplane kit builds.

Some smells were not so nice. For example, father eventually got rid of the old reel-type push mower, and bought a Sears power lawn mower with a two-stroke cycle engine. In these environmentally-correct days, you'd never go near such a machine. It belched clouds of oily, stinky smoke everywhere that would drift out of the yard, around the neighbors' property, finally rising into the atmosphere to poison us all.

But the worst of my childhood smell memories is of cheap enamel house paint. Even back in our house in Lakewood, Father frequently had minor remodeling projects going. Then when I was 13, we moved to Kent so he could save commuting time to his new job at Boeing. Property was cheap at the time on Kent's east hill, which had only started to be developed into suburban tracts, and he was able to recognize his architect's dream of designing and building his own house. It was done at absolutely minimum cost, though, and when we moved in, nearly all the interior finishing work had to be done. My memories of those early years is inextricably bound up with the near-constant smell of cheap enamel house paint, most purchased at Wigwam.

Then one day, he brought home a new kind of paint. It had a smell downright sweet in comparison. It was latex. 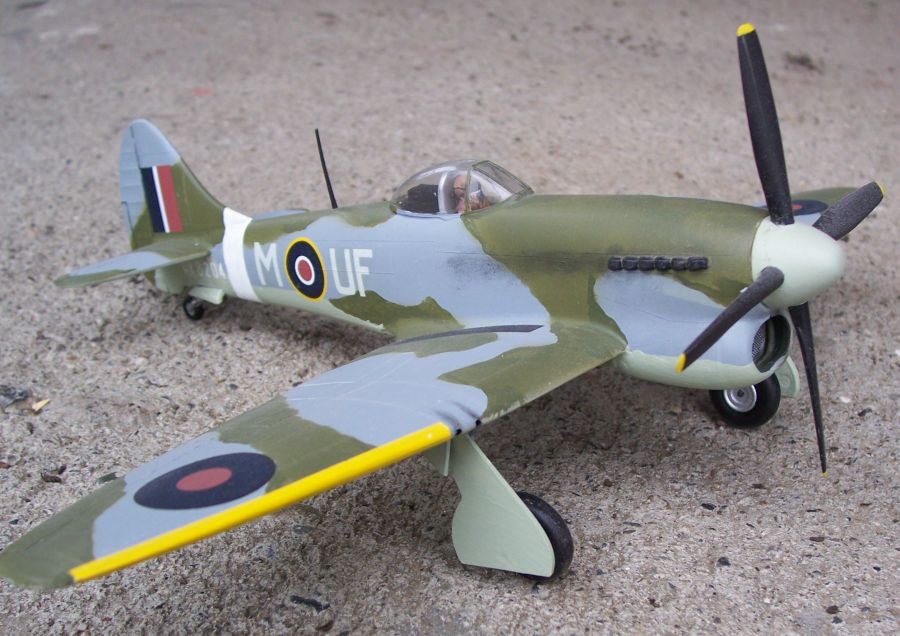 I regard the advent of latex paint as a major technological triumph to make my life easier and better. Since I've become a homeowner myself, inevitably involved in remodeling, I frequently have its scent fill my house. I sometimes come home to find my wife had a redecorating ‘attack', and some room is now a different color. But the smell doesn't bother me, and it doesn't last long. It couldn't be more different from the old enamels!

Recall in my last essay that I talked about the enamel paints I myself bought and used in my early modeling career: little dime bottles of Pactra and Testors' enamels. Their smell was one of those negative things that we modelers back Then just had to put up with.

There was a long interval till the Now. For a time, I built sport-type, non-scale radio control balsa models. The major overall finish on these was iron-on plastic film, but there was always a need for a little bit of paint here and there, and for that I used classic model airplane dope, or more modern Hobbypoxy enamels. Both of these paints were overpoweringly, unpleasantly aromatic.

But awhile back, as I've described, I came home with a bunch of Polly-S paints from a sale at University Hobby. These sat for quite a long time, until one day, a little over 10 years ago, I emerged from the Dark Ages. I realized finally that I simply had to return to building scale plastic display models. Having recently discovered eBay, I went browsing into the appropriate section and there, for reasons totally obscure to me at the time, found an AMT Hawker Tempest V going begging, with no bids. I put in a modest one of less than $3, and much to my surprise, won. Back Then, I'd built Revell's version in 1/72 scale. Now I thought I'd try it in 1/48, using this shiny new kit, and painting it with my newly-discovered water-based acrylic enamels. 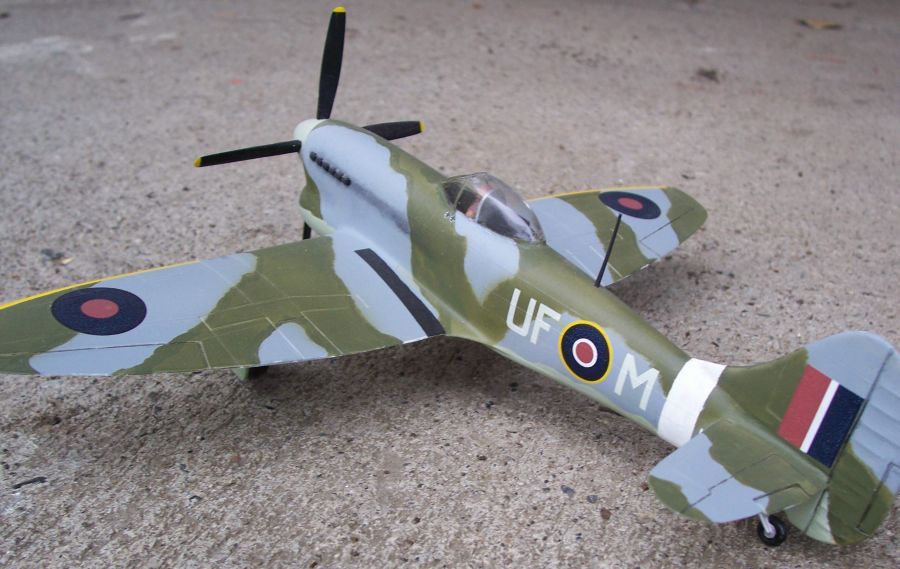 None of you readers need leap in here with e-mailed explanations of why the AMT Tempest kit went for so little money; it's perfectly clear now. But I had fun building it, and was quite pleased with how the paints worked. They covered well, had a scent even less intrusive than latex house paint, and like latex, cleaned up readily with just a little soap and water.

I should comment here that I never did like cleaning brushes in solvents like lacquer thinner, but always did so while working with my R/C models, and made my brushes serve for years and years. My father served as my ‘negative example' in this endeavor. Strong in many other ways, he seemed to lack the moral will to even try to clean his enamel-laden brushes. The approach he finally took was to wipe off as much of the enamel paint as he could, dip the brush in turpentine, then wrap it in aluminum foil and set it aside. If something else needed painting within a week, the brush would be more or less usable. Any longer than that, the brush would harden into a completely unusable rock and would have to be replaced. When he started using latex paints, cleanup was very much easier, but I can't say he ever really did a good job, even then!

Back to my return from the Dark Ages. I took my freshly completed Tempest to a meeting at the Museum of Flight of the NorthWest Scale Modelers, having been steered there by Emil of Skyway Hobbies. (I ‘discovered' his shop shortly after I began to browse eBay for plastic kits. His place is better!)

I half expected the NWSMs to be such skilled and sophisticated modelers that they would laugh when this first effort in decades went on the table. Well, they ARE skilled and sophisticated modelers, but they didn't laugh. (At least, not in front of me. I can't comment what transpired when several of them met afterwards at nearby Randy's Restaurant; their hangout because of its proximity to the MOF, and its large collection of model airplanes hanging from the ceiling.)

So I'm still with them, and still putting my efforts on the table. I like to think they're getting better, over time. I've joined the Seattle IPMS Chapter, too. Many of their members remain masters of lacquers and enamels, to this day. But I don't feel my use of water-based acrylics is any kind of limitation: models so finished, by modelers much better than me, take their share of prizes at the yearly Contests.

For myself, acrylics are ideal. By now I have a large collection of regular artist's brushes, two Paasche airbrushes, and way more color bottles than the little handful I got at University Hobbies. I do all my building at the dining room table, where my paints do not disturb the company I get to keep with my wife and cat. "Better living through chemistry", the industry's phrase was...and I endorse it.

Whatever paints you use, whether or not they remind you of smells from your youth,

Build What You Want, the Way You Want To, and above all, Have Fun!