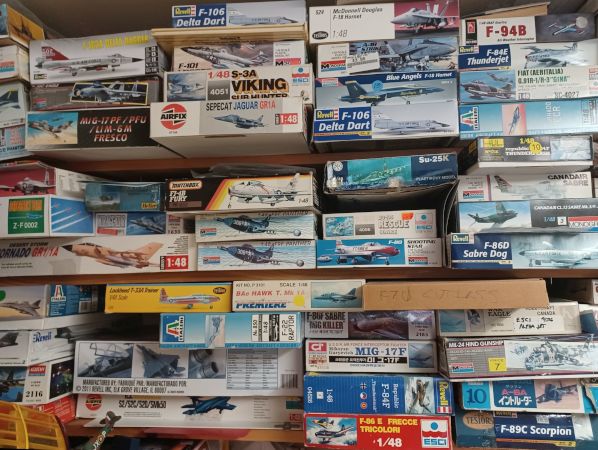 Stash Value: NONE, or What?

This was brought home to all of us in the IPMS's Seattle Chapter. President Eric, surprising us yet again with another demonstration of his near-superhuman powers, brought box after big box of unbuilt plastic kits to our October meeting. Around 1500 of them. Most of them were 1/72 scale plastic airplane kits from quite a ways back. The makers were are are perfectly respectable, but their kit contents were made to the standards Then, not Today's. Some of these kits were still in production; most weren't the kind we're willing to pay for. (From Web-based mail order houses, of course: pretty much all there are since the general demise of hobby shops.) Such kits had prices that we had to budget hard for, modeling as kids back Then, but this huge mass from that period went for...

The decades-long accumulation belonged to a modeler that we don't know (not a Chapter member) but his son found the IPMS/Seattle chapter: "My brothers and I have been scouring the Internet trying to find like-minded people that may be interested in...his collection." After Eric enumerated the costs and possible benefits of various ways of handling it, the son decided just to let our club have everything-hence our Prez ended up offering us all those boxes, All that COULD be done at our meetings was to give them away.

No exaggeration: not only did all the ninety or so members present spend well over an hour perusing this windfall, without taking it all. The kits didn't finish going out till the following month's meeting. Even then, many were left.

Being philosophically unable to allow plastic model kits to go into a landfill, and I'm not the only one, I took a modest-sized box to the nearby St. Vincent de Paul's thrift store. Three weeks later, attending their monthly half-off sale, it was clear that the donations hadn't leapt off the shelves. Some still sat among the puzzles.

To return to my opening line: my stash would generate little, if any, cash in sales. My nearly five hundred kit boxes are – for what it's worth – regarded by some modeling colleagues as but a trifle...a feeble, minimalist imitation of an actual model stash. Some of those colleagues have a higher proportion of more modern kits that – as I write this – retain some commercial value. But that'll fade over time, just like our deceased benefactor's collection.

Let's leave that grim prognosis and change viewpoints: from financial to functional...

I have a kit stash! Unimaginable when modeling way back When. I never had more than one kit at a time: one purchase at Thunderbird Drugs consumed my entire weekly allowance. Like the rest of you, my income rose in adulthood. Even in real terms, correcting for inflation and expenses. I have to put a roof over my own head, clothes on my own back, food on my own table, expenses I should've appreciated more as my parents covered them. Nevertheless, now I still have enough so-called 'disposable income' to have gathered several racks of kits.

I can draw any out whenever I feel like it...whenever I have a little time and energy. In between, I look over my shelves with all the pleasure misers must get, I suppose, of fondling gold coins. If my personal 'build rate' is factored against actuarial tables, it seems next-to-inevitable that I'll never get all my kits built, even if I never purchase a single additional one. Nevertheless, I'm rich! Rich, rich, RICH! Bu-WAH-ha-HA! Even richer now, having taken a few of the old kits from those two IPMS meetings. Fellow club members can't accuse me of being foolish...none could possibly reach the requisite Moral High Ground...weighed down as they are by their own stashes!

Whatever! My wife Sandra says everyone ought to have at least some refuge – some experience – some part of their life – where they have the feeling of being rich. We modelers are fortunate to have such. Come to think of it, that's why I cling to that slogan I inherited here on Internet Modeler:

Build What You Want, the Way You Want To, and Above All, Have Fun!