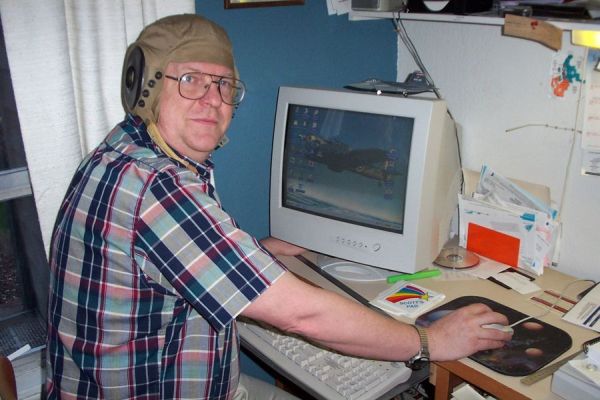 When I was little, games played with the other kids always involved large amounts of imagination. "Let's say we’re in an Interplanetary Police spaceship…" or "Let's say the playhouse is our castle and the Vikings are attacking…" or "Let’s say you three are the terrible stagecoach robbers, and we three will be the posse…"

Since this is a nostalgic modeling column, I could take it in the direction that when I was modeling back Then, I used to pretend I was actually flying my creations on vital missions and into desperate dogfights. Whereas Now, I’m past that… yeah, right! From time to time, a member at a meeting of the NorthWest Scale Modelers or the Seattle Chapter of the IPMS will refer to his model having reached a state of being complete enough to run around with while making engine noises. Invariably, this gets a laugh from everyone else, a laugh tinted with self-consciousness at how non-GrownUp we still are.

I knew, however, that when I became an adult, I would stop imagining things like this and just go about the business of life, and would know exactly what I was doing. Grownups obviously did not play "Let's pretend". Certainly not pretending to be spaceman, knights in shining armor, or villains and heroes and the Old West.

When I became a grownup myself, it took quite a while to realize we did have to do a lot of pretending. Pretending to be other things, and carry off the pretense of our roles not just enough to fool ourselves, but other people, too, into thinking we knew what we were doing.

Roles such as safe driver, diligent scholar, valuable employee, devoted spouse, competent parent. No one’s actually fully 'qualified’ (whatever that might mean) for any such job, or ever has enough experience and knowledge not to be thrown for a loop by the next quirk of fate. Moreover, there’s an astonishingly large array of such roles, and it seems there’s always more to be added to everyone’s repertoire, often involuntarily and at the worst possible times. Inevitably, we have varying degrees of success, trying to fill them. As Dad in my all-time favorite cartoon strip "Calvin and Hobbes" once said, trying to explain the World to son Calvin, "Everybody’s ad-libbing their lines, because we don’t know if we’re in a tragedy or a farce." It makes me feel a little better about my inadequacies and failures, large and small. It also makes me moderately proud of at least attempting to accomplish something.

For example, you realize that I have no formal training or qualifications for THIS job? It’s happenstance: but for the death of our late friend-and-relation, Al Superzynski, I wouldn’t be doing this. It would never have occurred to me, modeling back then, that someday I would write regularly for a medium that sprawled over the entire Planet Earth, and that people in France, New Zealand, and Russia would send me comments on their own experiences, often remarkably like mine.

New roles have been required recently, including funeral services organizer and orator; my father died a couple weeks ago. No shock there: he was 88 years old, and pretty much all the vital functions wore out. What was surprising was that since he was always so thorough, matter of fact, and competent at the things I saw him do, I figured there wouldn’t be much for me to do when the time came for his funeral. Turns out he wasn’t good at the role of planning his own demise!

By the time you read this, those roles will have been fulfilled; adequately, I hope. Then I have others to assume, including instructor and seminar presenter at the IPMS’s Seattle Chapter’s yearly Contest and Show. Never done anything like this before, either, but I've agreed to conduct the first seminar. I’ll try to show the fundamentals of plastic kit construction. Some of our guests will have tried modeling back Then, but fell into their own Dark Ages. (As before, thank you, Lego builders, for that evocative turn of phrase!) Some guests will bring children who have never tried modeling at all. I hope to convey the basics well enough to get a few more people into (or back into) our fine hobby. Doubts pop into my consciousness, from time to time, about my ability to take on this new role, but I take ‘moral armament’ from a dictum heard from my father many times during my lifetime: "Do what has to be done!"