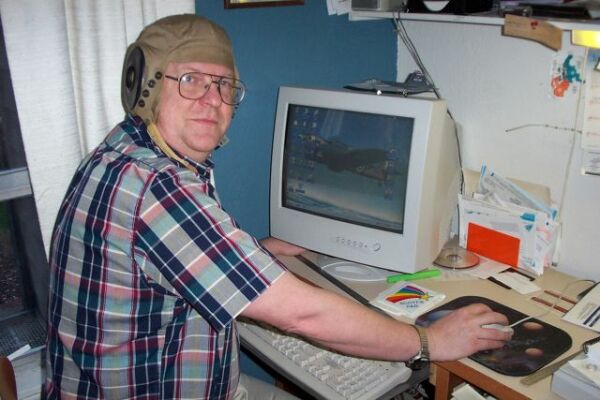 There are two major differences between my modeling Then, and Now:

These two factors came together during the last meeting of the NorthWest Scale Modelers. At our October meeting, our high-ranking upper-up Lord High potentate, dictatorial Presidential senior officer, to whom we give the title of "The Person Who Talks The Most" (we are Very Big on ceremony, titles, slavish adherence to Robert’s Rules of Order, etc., at NWSM meetings, as anyone plainly can see…) showed us pictures he had extracted from other members. They were shots of several of our modeling work areas.

This computer/video projector presentation was the hit of the evening. As each picture came up, it was greeted with boos, cheers, catcalls, and laughter. Few of us ever see our colleagues’ work areas, but we readily recognized common elements ("Aha! See? His actual work area is that single statutory SQUARE FOOT!") and were able to cull ideas about how to improve our own handling and the accessibility of our tools, parts, paints, etc.

I hadn't gotten around to responding to the email message from the PWTTM; hadn’t even taken the pictures, yet. He’s got them now, though, and will show them at the next meeting, with pics from some other tardy members. Meanwhile, I trust this column will help make up for the delay…

Back Then, I did not have a specifically assigned workspace, certainly nothing ‘permanent’ where I could leave my tools, paints, and partly-completed models out. (? --Were there ever such? Like Calvin, my builds took a maximum of one afternoon!)

I must have started on the dining room table, later moving to a work area table after the garage was remodeled into a family room. Just after I started seventh grade, however, we moved to new house, and I had there the incredible wealth and luxury of my own room! --Equipped with my own bookshelf! --And my own desk! This was where I would model for years, except for those occasions when something I was building was other than the usual plain-old modern jets or World War Two fighters —such as the Stanley Steamer, or the TV starship Enterprise. Although they never actually helped me model, builds like these interested my two younger brothers, so I’d move my stuff temporarily to the big worktable in the larger bedroom the two of them shared.

Modeling Now sees my methods and work areas both advanced, yet seemingly retrograded. I own my own house now…or rather my wife and I own it together, and I have more than one work desk where I could keep my modeling stuff laid out as long as I like. But it turns out that I’m not happy isolating myself in some remote corner. I’d rather stay out in the main section of the house where I can see and talk to Sandy, and work on my models while she pursues her only own hobby activities, such as furniture refinishing, inspired by pictures in old-fashioned household décor magazines. So I’ve returned to my earliest work area from back Then: the dining room table. 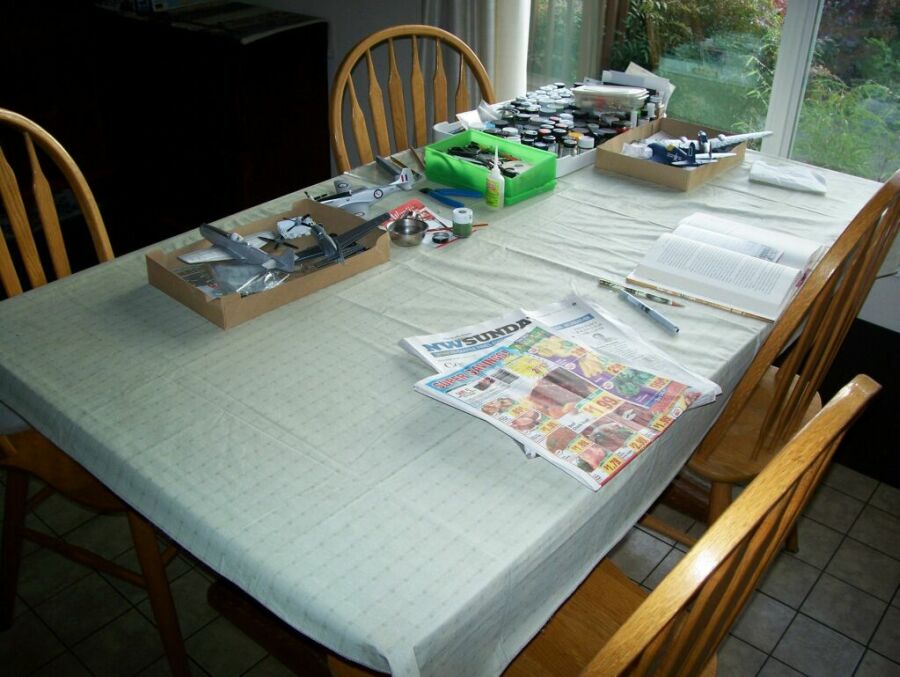 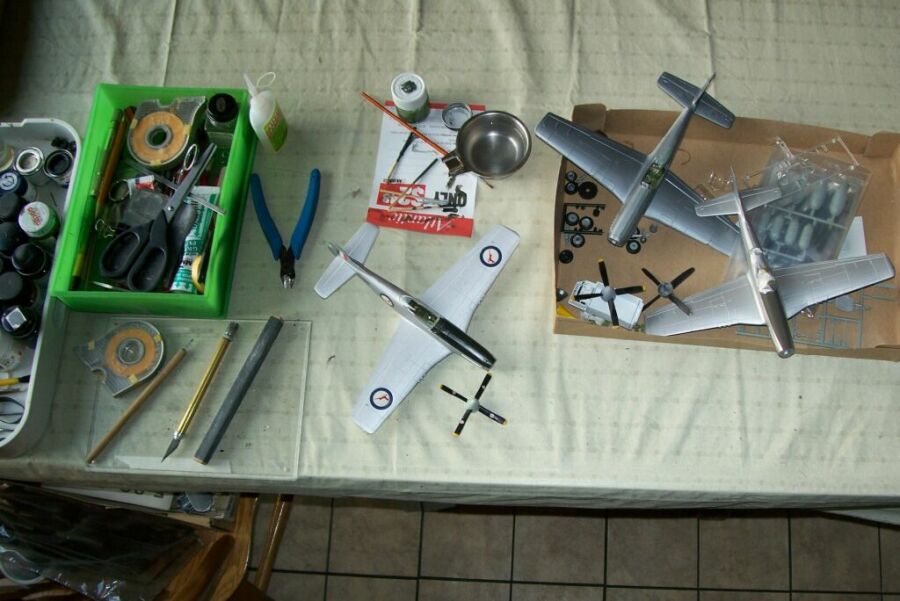 Back Then, if you could have looked over my shoulder at a work session, you'd see the contents of exactly one kit being put together with my father's No. 1 X-Acto knife and a tube of Testors’ plastic cement. There would be a few bottles of Testors’ or Pactra enamels, and two brushes, to put minimal paint details on guns, cockpits, pilot features, and landing gear.

Look at my tool set now. I think of it as plastic modeling comprehensive-but-minimal essentials, selected and culled down to fit a 6x9x2-inch plastic school-supplies box. We’ll start at the top left-hand corner, under the wing of one of three Mustangs I’m building simultaneously (quite inconceivable to myself back Then!): 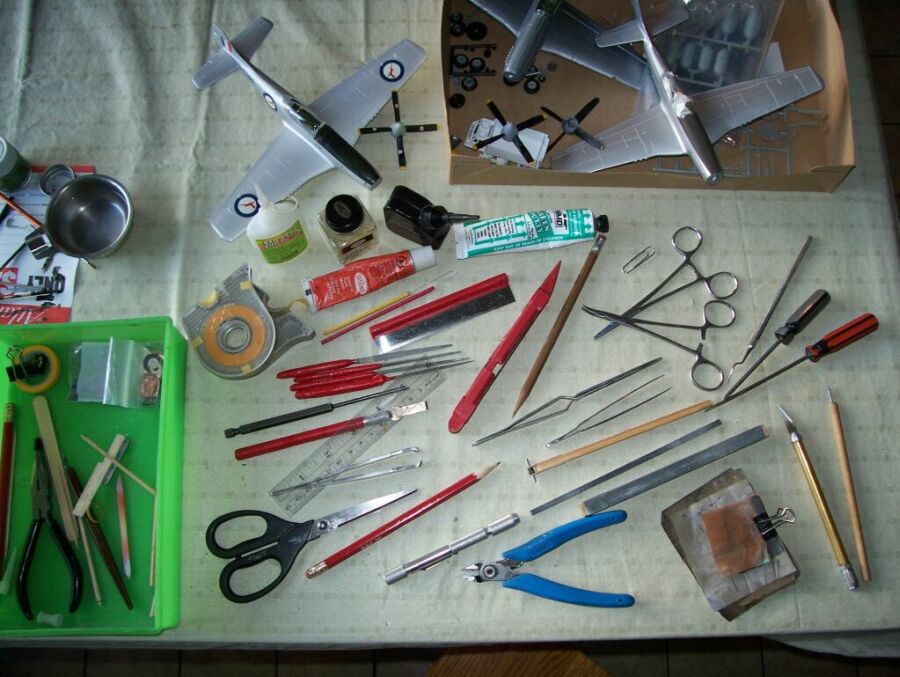 There's a one-ounce bottle of Pacer Zap-A-Gap medium-viscosity cyano-acrylate super glue—my mainstay—and a bottle of Testors’ liquid cement, then a squeeze bottle of Model Master cement with needle applicator, and a still-classic tube of Testors’ regular plastic cement. Next to this is Squadron ‘Green Stuff’ modeling putty. Going more-or-less clockwise from under the box o’ Mustangs: two hemostat clamps (straight and bent-nosed), a curved-point dental pick, fine Phillips-head and flat-blade screwdrivers, a No. 2 pencil (I get irritated whenever one isn’t readily to hand), my current ‘Excel’ No. 11 knife with improved rear clutch, a small bundle of assorted fine-grit sandpapers, a slender sanding block I made, a tiny strip sander cut from a larger fingernail polisher, a chopstick holding to a rivet-replacement roller, fine tweezers, ‘reverse’ tweezers, a Xuron industrial clipper, and small scissors.

Then note the Micro Mark cutting tweezer: the evil Stephen Tontoni keeps snagging me to build at least one model for each Museum Of Flight themed display, but he’s also the one who let us all buy into an order he placed when Micro Mark had a sale on these cutting tweezers. If you don’t have one now, you need one: it’s the only tool that can gracefully snip really fine details—like biplane struts and landing gear braces—off an Edward or Roden sprue, without breaking them.

To continue: there’s a clear six-inch plastic ruler, an X-Acto #1 knife with a chisel blade, a detail-removing probe/scraper, four ‘Swiss’ fine files (actually, I think these came from the Philippines…), a Micro Mark adjustable sanding-belt holder, a small fine-toothed razor saw, and next to the two rolls of Tamiya masking tape in their handy-dandy dispensers, a pair of small wire-ended placement probes for applying and accelerating super glue droplets. These last two, plus the detail-removing probe and rivet-scribing roller-chopstick, are tools I made myself. Man: ‘the tool maker’!

A few odds and ends linger in the toolbox: an additional roll of Tamiya tape, toothpicks, emery board, needle-nosed pliers, and a bag of coins and washers I use to measure or cut small round circles. 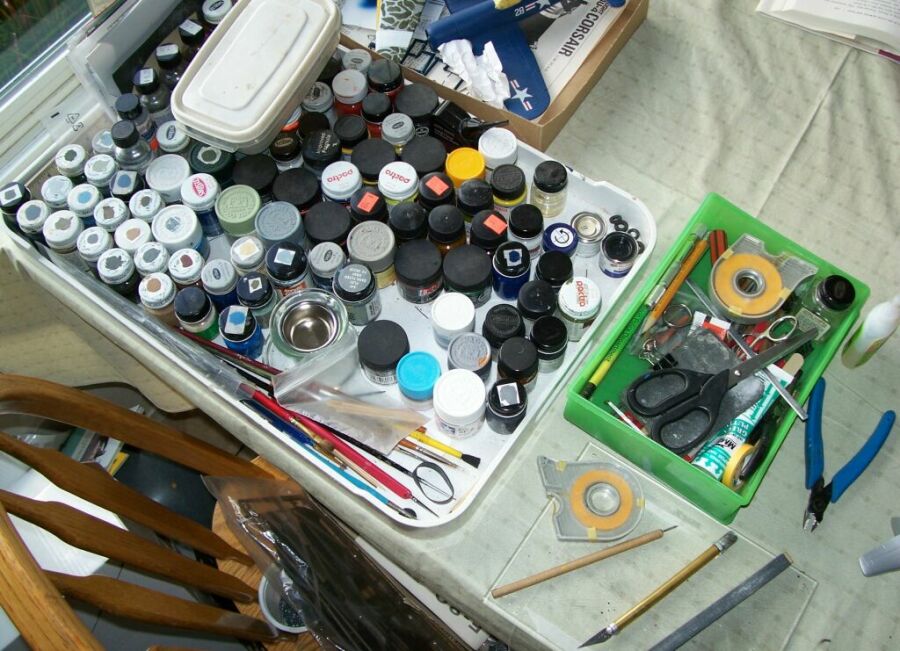 I need all these things, and the vast number of paints there in that thrift-store serving tray (with a hidden reserve, yet!) to build the enormous number of models in my kit stash. Back Then, I never owned more than one kit at a time. It was inconceivable to accumulate any stock with my limited allowance and even more limited patience. Now, I work on-and-off on three or six (OK, maybe even a dozen) projects-in-progress, at any given time.

Back to the two factors I named the beginning of the article. Back Then, I didn't even know of other modelers’ existence, and therefore had nothing to learn from them. Whereas Now, interacting with other modelers, I not only get information from them, but am expected to provide information back! As with articles like this one…

I didn’t name that Person Who Talks The Most. I will Now. Heaven help me! --It’s Ken Murphy, the first other modeler I ever met in my life. That was in 1963 and we’re STILL at it! --This is PROGRESS?!

The other factor: I don't model like Calvin any more. If you’re a ‘fan’ of his, recall how he and Hobbes once spent a WHOLE AFTERNOON building a Phantom jet kit. Well, I just got back from the yearly model show and contest held by the Vancouver BC IPMS Chapter. A raid on the Dealer’s Room yielded—quite cheaply—a Phantom jet kit. Perhaps a free afternoon will come up soon. Watch this space for developments…as we hold tight to our philosophy Al phrased as:

Build What You Want, The Way You Want To, and Above All, Have Fun!