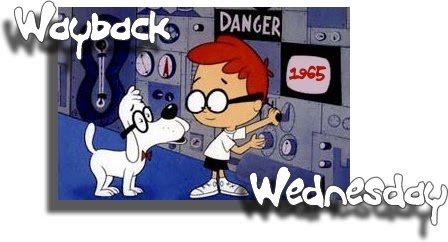 This column would be a lot easier to write if I could but draw on first-hand information...such as with access to Mr. Peabody's WayBack Machine. (Younger readers may need to do a Web query to know what I'm talking about, but not us Aging Baby Boomers, who watched Rocky & Bullwinkle regularly.)

I wonder what reaction Young Scott, then in the early 60s, would have if Old Scott from Now were to drop in, to join his modeling at the desk in his bedroom after school. Note that he (Me) started reading science fiction about the same time I started assembling my Monogram B-58 Hustler "with Weapons Pod Drop Action"! Time travel is common in Sci-Fi stories, so there's little doubt Young Scott would believe in Old Scott's visit.

What do I dare tell him? That over the decades, models would become vastly more accurate, sophisticated, complex, and expensive? But that even correcting for inflation (plus expenses Old Scott incurs daily that Young Scott's Mom and Dad incur for him) I still was able to accumulate a vast 'Stash'. The concept would be hard for him to get his head around. He has no stash. Perhaps very briefly on his birthday and at Christmastime, his desk might hold two or even three kits... but these would be assembled and done with, at most one day apart. Whereas Now, even in my almost optimistic moments, I doubt my life will be long enough to assemble kits I have - much less any yet to be acquired!

What if I tell him that if he can hold off on actually building that Revell 1959 Space Station kit he was given, but instead store it carefully in pristine condition, someday he could sell it for a grand-and-a-half? Nah: a plastic kit being someday getting to be worth what a new car went for Then - quite impossible! Ridiculous! Old Scott must be senile!

I've already rejected the idea of trying to subsidize his modeling allowance Then with my assets from Now. He had no bank account, certainly no PayPal account, no fragment of a concept of steering electrons thru Cyberspace. Any cash I gave him would be instantly noticed as counterfeit/fake...who'd accept it was merely legally-issued currency gone temporally astray?

What's left? What if I encouraged him by saying that the day would come when he'd not only be part of a large regional plastic model building club, but that it would have Chapters all over the world - and that someday he could gather models and travel all the way to a foreign country, putting his next to 600 other models for hundreds of other modelers to see and admire... and even get judged for ribbons...

That's what I've actually been doing these last 20+ years, including this October's trip to the Vancouver BC Chapter Contest & Show, the first they've hosted in three years. I'm a better modeler than Young Scott, if hardly becoming a master champion builder. I won 3 ribbons there nonetheless.

I think that's fantastic enough. With no way to prove it, one way or the other, I'm content to imagine Young Scott would actually believe that. But whether he would or not, I'm glad he's continued to model in the five-and-a-half decades since Then. He'd endorse the phrase:

Build What You Want, The Way You Want To, and Above All Have Fun!