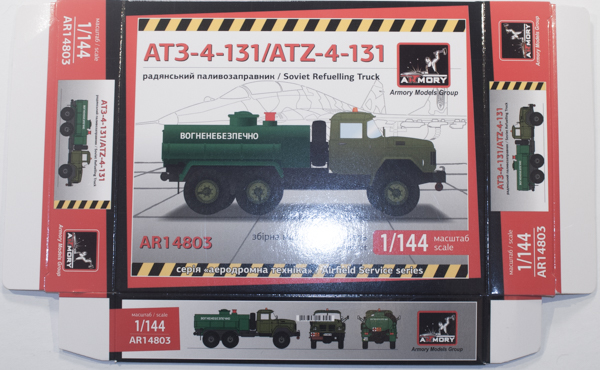 If you've read my First Look on the "straight" ZiL-131 cargo truck, then you can scroll forward to The Kit paragraph, as this is just the same entry from Wikipedia:

Since Armory is releasing a number of vehicles based on the ZiL-131 chassis, the parts count on this 1/144 ATZ-4-131 is almost the same as the "stock" ZiL-131 kit. This kit also consists of two sprue of injected, plastic pieces; six pieces of resin (the main fuel "tank", and other pieces that are attached to said "tank"); and a photoetch set with 23 pieces of photoetch metal on it, not all used with this kit. In fact the same can be said for the injected, plastic sprue. Since Armory has released a number of different "type" of trucks based on the ZiL-131 chassis, there are parts on the sprue that aren't used for all variants. There are two plastic sprue, one in grey, the other clear. The gray injected sprue consists of 18 pieces, two not being used with this release. The second, injected clear sprue is for everything meant for the cab; there are 17 pieces on the sprue, with seven not being used with this release. Releasing all cab parts in clear makes sense, that way all windows are clear; in fact, Armory also includes a set of masks to use on the cab once it's all together. Excellent. There is also a small set of decals, "license plates", small unit symbols for the door sides and slogans for the main fuel "tank" sides. The decals are meant for five different refuelers, two Ukrainian and three Soviet.

Construction starts with the chassis and other pieces for the underside of the truck. First is assembled what I assume is a cargo container with a spare tire (and the first piece of photoetch used) then you move on to assembling the drive-trains, both front and rear. These are then added to the main chassis, along with the bed frame and two hooks. Then you move to assembling the cab in three different steps before adding the cab to the body. At the same time you add the two fuel tanks.

The last part of main construction is adding the main, resin fuel "tank" to the chassis, along with the other pieces meant for this "tank" as well as an item to add under the front fender. Finally, the last two steps have you add a bunch of the photoetch to the entire model.

If you either want a 1/144 stand-alone Soviet aircraft refueler or one to add to a diorama, then you definitely want this ATZ-4-131 from Armory. It will build into a great looking kit and will give your flight-line that "used" feeling.

Huge thanks to Armory for sending this review model.