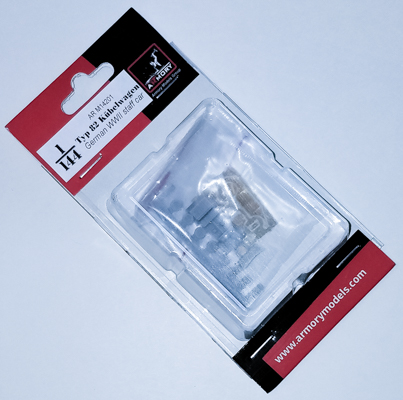 "The Volkswagen Kübelwagen (a back-formation as literally, 'tub' car), was a light military vehicle designed by Ferdinand Porsche and built by Volkswagen during World War II for use by the German military (both Wehrmacht and Waffen-SS). Based heavily on the Volkswagen Beetle, it was prototyped as the Type 62, but eventually became known internally as the Type 82.

"Kübelwagen is a contraction of Kübelsitzwagen, meaning 'bucket-seat car' because all German light military vehicles that had no doors were fitted with bucket seats to prevent passengers from fallingout. This body style had first been developed by Karosseriefabrik Nikolaus Trutz [de] in 1923. The first Porsche Type 62 test vehicles had no doors and were therefore fitted with bucket seats as Kübelsitzwagen, that was later shortened to Kübelwagen. Mercedes, Opel and Tatra also built Kübelsitzwagen."

The only other 1/144 "kits" (a couple of these are one-piece, already assembled) are: World Tank Museum, Pro-Hobby, Arrowhead Miniatures, FToys, and Dameya. Since I don't have any of those I can't compare them to the Armory kit.

The Armory 1/144 Type 82 Küblewagen consists of 11 pieces of gray resin and a photoetch fret with six pieces. Construction should be easy although you need to be careful with the photoetch. To keep the model scale-like, Armory has provided the sides of the Küblewagen as photoetch pieces. That assures them being thin enough for scale. Other photoetch pieces include the windshield framing (in which you provide your own material for the windshield), steering wheel, instrument panel and hand brake.

I will build the kit thusly: First glue the instrument panel to the dashboard then follow that with the resin seats. While I could glue the steering wheel and hand brake in now, I might wait until after painting and weathering the entire kit. Glue the wheels to the one-piece body along with the headlights (which I will probably hollow out and add MV Lenses, if they make them small enough). Now you have a 1/144 Küblewagen ready for final details.

Be aware the Armory doesn't include the folded tarpulin (or "roof") that is usually seen on most Küblewagens. Nor does Armory include a rear bumper or anything else that can be seen from the rear of the car. Sure, in this scale maybe a lot of small details, but something to be aware of if you're keen on making the model a decent representation.

Even with the missing items I still think this is a great rendition of the Küblewagen in 1/144. Most might not care about the missing details and those details missing can easily be added to enhance the model. Whichever, it will look great on your shelf or within a diorama.

I definitely thank Armory for sending the review Küblewagen.