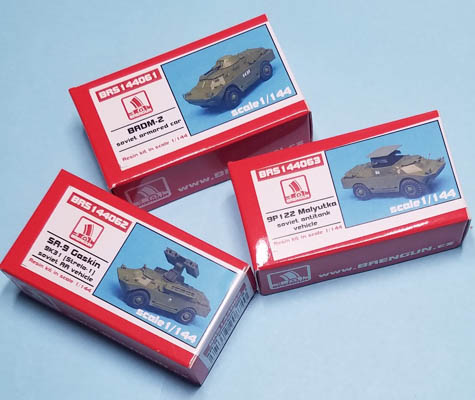 "The BRDM-2 (Boyevaya Razvedyvatelnaya Dozornaya Mashina, Боевая Разведывательная Дозорная Машина, literally "Combat Reconnaissance/Patrol Vehicle") is an amphibious armoured scout car used by states that were part of the Soviet Union and its allies. It was also known under the designations BTR-40PB, BTR-40P-2 and GAZ 41-08. This vehicle, like many other Soviet designs, has been exported extensively and is in use in at least 38 countries. It was intended to replace the older BRDM-1, and has improved amphibious capabilities and better armament compared to its predecessor."

"9P122 "Malyutka" – ATGM launcher vehicle with 6x9M14M "Malyutka-M" (AT-3B Sagger B) on an elevatable mount with overhead cover. A total of 14 missiles are carried on board. This model is found in regimental and divisional anti-tank units of MRDs, the anti-tank regiments of combined arms armies (CAA), and in the anti-tank regiment or brigade in the artillery division of a front. It has a crew of 2".

Brengun has released three different kits based on the BRDM-2. The first is the "straight up" BRDM-2 with "just" the turret. The second release is the 9K31 "Strela-1", known in the West as the SA-9 Gaskin anti-aircraft vehicle. The third and last release is the SP122 Malyutka which was an anti-tank vehicle. The only items common to all three are the wheels and the decals, all other parts are unique to the type.

The "straight-up" BRDM-2 will be a quick build. Once everything is separated from the pour blocks (and thankfully Brengun has made the main body's pour block - on all three releases - at the rear of the one-piece body) then construction will go relaitvely quick with this one. Resin supplies the main body, wheels, turret, guns and search light. Photoetch is used for rear doors, headlight guards, rear "lights" and a rear-view mirror.

The next release from Brengun is the SA-9 Gaskin, anti-aircraft vehicle. For this one the rest supplies the main body, search light, common wheels, missile "boxes" both in the turret area and mounted on the body's sides, as well as the elevation "turret". Photoetch is used for the rear panels/lights, etc.; headlight guards; and rear-view mirror.

The color for all three is listed as "khaki" and the decals just consist of national markings as well as vehicle numbers. There is no specific vehicle listed in the instructions so it's best to research that on your own.

These are excellent examples from Brengun of the BRDM-2 and other vehicles based on that chassis. It shouldn't take long to build all three and could be good as AMS-busters, as long as you don't mind a little photoetch to go with busting your AMS.

I definitely thank Brengun for these kits to review.