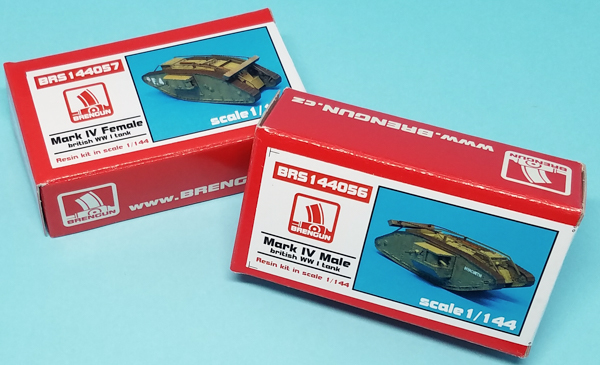 "The Mark IV (pronounced Mark four) was a British tank of the First World War. Introduced in 1917, it benefited from significant developments of the Mark I tank (the intervening designs being small batches used for training). The main improvements were in armour, the re-siting of the fuel tank and ease of transport. A total of 1,220 Mk IV were built: 420 "Males", 595 "Females" and 205 Tank Tenders (unarmed vehicles used to carry supplies), which made it the most numerous British tank of the war. The Mark IV was first used in mid 1917 at the Battle of Messines Ridge. It remained in British service until the end of the war, and a small number served briefly with other combatants afterwards."

The main difference between the "Male" and the "Female" were the sponsons on the side, and what armament the tank carried. The "Male" had three machine guns and two 6 Pounder guns, while the "Female" had 5 .303 Lewis machine guns.

Brengun produce both the "Male" and "Female" Mk.IV in 1/144. In gray resin, both contain the main body; both sides; two of their respective sponsons; and an un-ditching beam. The "Male" also has - in gray resin - two parts of the exhaust; three 6 pounder gun barrels; and four machine gun barrels, both of those having an extra "just in case". The "Female", also in gray resin, has two parts of the exhaust and five machine gun barrels, providing no extras. Both kits also come with a photoetch fret that contains the rails on top of the tank (including their mounting units); exhaust mounts; towing points; a fold-up "box" for the top of the tank, at the end of the exhaust; the rear hatch; and two chains to "hold" the ditching beam. Both variants come with markings for two tanks:

Decals appear to be in register and are nicely printed. Note that Brengun provide MIG paint call outs.

As is usual with Brengun armor releases, my biggest beef with them is the removal of the larger parts from their pour blocks. The Mk.IV blocks are substantial. This time a miter saw - or equivalent - might be the best bet. The pour block for the main sides is right on the tracks, but thankfully on the tracks that sit on the ground. Once all parts are removed, construction will move quickly.

The last pieces added to the tank are the two rear mounts for the rails, both sponsons as well as the armament and un-ditching beam with chains.

If you're looking for a Mk.IV in 1/144 for your collection, then look no further then Brengun. Detail-wise both the "Male" and "Female" are top notch and will look great on your shelf. Pick up both since it will be difficult to choose just one.

Huge thanks to Brengun for sending these tanks to review.