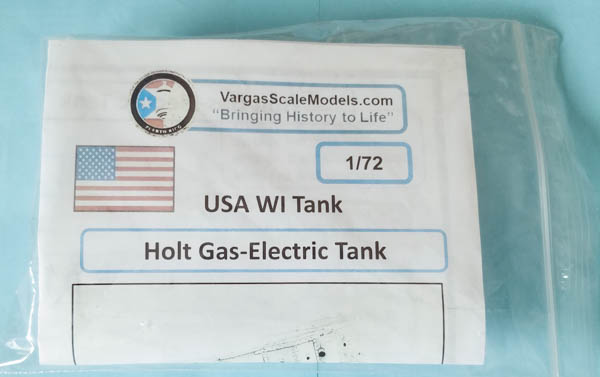 The Holt Gas-Electric Tank was the first armored tank produced by the United States of America. It was prototyped in 1917 but was found to be too heavy for the motor it used. Because of the gas engine powering the the electric generator, which in turn provided electricity for the two electric motors that powered the tracks, there was a lot of cooling needed. That in trun incurred a lot of weight, too much for the 90hp engine to handle.

A more comprehensive history can be found on the Tanks Encyclopedia site.

The Vargas Scale Models 1/72 Holt Gas-Electric Tank consists of ten 3D printed parts. Most of the vehicle is in one piece, the only separate pieces are the two side turrets; two guns for those turrets; two rear, armored doors; the front Mountain Howizter; and the two, one-piece wheels and tracks.

It's written in the instructions to test fit each part, which is a good idea. The side turrets will need to be best fitted and appear to be the only pieces needing to be fitted. The rest should go easy. You'll need to decide if you want to leave the rear armored doors open or close them; personally, I'm going to open them because the detail in the rear of the tank is outstanding. Painting the area could be "fun", though, given the close proximity of all the parts. Still, it's worth it because the detail the 3D printing added is awesome.

Thankfully I can't see many - if at all - "striations" (or "print lines") in the print so there isn't much of the surface that needs to be prepped. That means contruction should go quickly with painting taking up the majority of your modeling time.

It definitely will not take a lot of time to finish this model. It's nice to have something different in 1/72 for a change and this tank definitely fits that aspect.