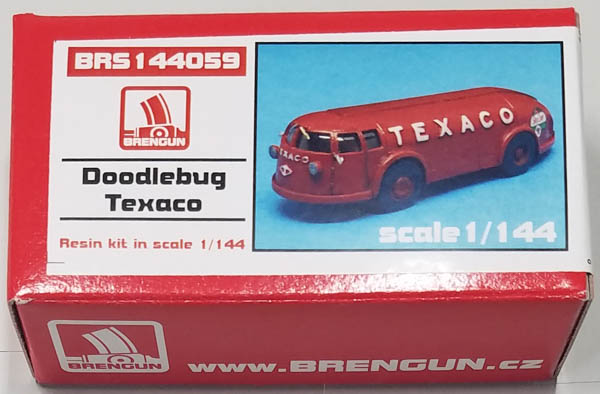 "The Texaco Doodlebug (also called the Diamond T Doodlebug) was a streamlined, futuristic American tanker truck of the 1930.

"The vehicles were streamlined and highly aerodynamic. The overall shape, a flattened half-cylinder rounded at the front and tapered at the end, has been described as a "pill" or "breadloaf". The passenger cabin was blended into the body, and there were no fenders, hood, cowl, or running boards. The windshield was compound curved glass, quite advanced for the time. It stood only 6 feet (1.8 m) tall, very short for a tanker truck then or since.

"The bodies were made by Heil Trailer in Milwaukee, Wisconsin, and the chassis by Diamond T. The first model was publicly displayed in January 1933. The Texaco Doodlebug probably featured a rear-mounted Hercules L-head  six-cylinder engine. The clutch and gearbox were actuated by air pressure. A microphone in the engine compartment connected to a speaker in the driver's position allowed the driver to hear the engine, so he would know when to shift.

"The Doodlebugs were part of an overall project by Texaco, contracted to industrial designers Norman Bel Geddes and Walter Dorwin Teague, to modernize their brand look. This project produced the Texaco star-T logo still used today and other updates, including the Doodlebug, which was designed by Bel Geddes and his design team. However, not many Doodlebugs were produced (some sources say six, but the actual number may be lost to history)."

The Brengun Doodlebug Texaco consists of twelve pieces of gray resin, two vacuformed clear pieces (an extra, "just in case") and a photoetch fret with eleven parts (steering wheel, gear shift, windshield wipers, and rearview mirrors with their support). The decal sheet allows finishing the model in one of three ways: "just" the "Texaco" text on the sides; and with their trademark fireman's hat or trademark "Sky Chief" marking on the rear sides.

Construction is super simple, except for one area, that being the vacuumformed clear pieces. Once everything is removed from their pour blocks then you probably want to start painting right away. I'm going to take care of the "vacu glass" (as it's called in the instructions) first, but will paint the main body, inside and out. There is no color indication for the interior and photos I've seen don't show that to any degree. So, might as well spray the entire body read, inside and out. When it's dry, then add the "vacu glass", mask the windows and spray it. On the vac sheet it's like a "clam shell" so the entire thing could be added; however, the instructions do show that just the part that contains the actual windows - and not the entire upper section - is what's to be removed. But there's no clear indication on the vaccuum-formed parts where that separation is. In fact, if you bungle the "main" piece for the windows, then the spare doesn't contain any indiciation of where the windows are at all. So take care and get the first piece fitted correctly.

But once the clear piece is in, everything painted then construction continues. The interior is one piece - floor, dashboard, seats and steering column - to which is attached the steering wheel and gear shift. As was already mentioned, there is no color mentioned on the instructions for this, so maybe a dark gray dashboard/steering column with leather seats. Once the interior is in - along with the rear "bulkhead" - then the rest of construction proceeds quickly.

To attach the axle assemblies to the one-piece chassis you'll need to clean out the area they slot into. But once that's accomplished then you glue the axles on and it's ready for final assembly. I definitely would leave the wheels off until the end of construction.

This is an excellent model for not only ease of building, but also for the possibilities it brings. I have a whole diorama planned that will include the Doodlebug with a period aircraft and a large, lit "Texaco" sign. Now to put it all together.

Huge thanks to Brengun for the Doodlebug to review.