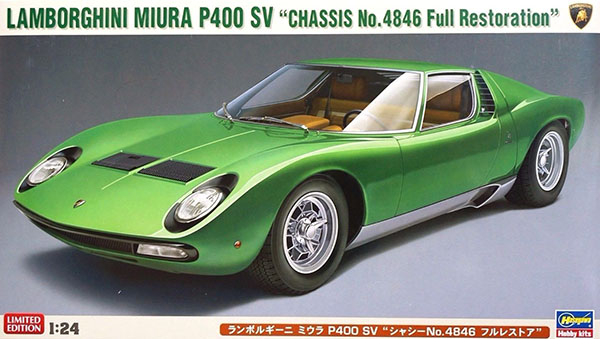 Lamborghini is a name synonymous with sleek angular supercars, but the company did not start out that way. Founded in 1963 by Ferruccio Lamborghini, the company's initial goal was to build a polished grand touring car to compete with vehicles such as the Ferrari 250, Aston Martin DB5, and Mercedes 300SL. Their first car, the 350GT, started off with a V12 engine, but unlike Ferrari, Lamborghini wanted the engine to be a proper road engine, not a detuned race engine. Giotto Bizzarrini designed the original engine, and this base 3.5 liter V12 ended up being Lamborghini's primary engine design up until 2010.

With the powerplant sorted out, body design came next, and while the 350GT and 400GT were well received grand tourers, designers within Lamborghini wanted to build a car with more of a racing pedigree. The result was the P400, a car with a very different look and feel to the earlier Lamborghini designs. The chassis featured a transversely mounted mid-engine layout, and the bodywork was designed by the famous Bertone company, starting a partnership that would produce some of the most iconic cars of the 20th Century. Given the name Miura, the P400 featured smooth flowing curves and a wide stance, resulting in one of the most beautiful cars of all time.

The original P400 evolved into the P400S in 1968, which saw a slight boost of horsepower and the addition of creature comforts such as power windows and optional air conditioning. Perhaps the most famous P400S is one that is heard, not seen, as Eddie Van Halen revved his P400S in the song Panama. The final Miura was the P400SV, which got an additional horsepower boost, as well as wider rear wheel fenders for larger tires and a separate gearbox lubrication system. Fifty years later, should you wish to own a Miura, they can be had for only a couple million dollars.

Hasegawa's 1/24 kit of the Miura SV is a nice looking kit out of the box, molded in black, chrome, clear, and green plastic, with rubber tires. The kit also includes a small bit of adhesive metal for the various badges and names. A decal sheet provides other markings and details such as instrument dials and engine name plates. Overall, the parts are cleanly molded and will require only minor edge cleanup. With this broad overview out of the way, let's jump into the details.

Starting with the interior, this is quite well done, with very little molded in place. The dashboard comes in an upper and lower piece, with the lower piece having all the instruments molded in place. These get decal faces, both for the two main dials and the six in the center section. The steering wheel and column are separate, with the center of the wheel also getting some decal treatment. Moving to the cockpit tub, this has a separate e-brake handle, separate shifter, and a two-piece rear glass assembly. There are also quite a few of those self-adhesive metal parts going in here, including the shifter base. Also separate are the seats and door side panels. The body comes with the doors molded closed, so no options to open things up here.

Moving on to the chassis, this starts out as a one-piece assembly onto which fits the completed interior tub. There are separate bits and pieces to build up the engine, but this is not a complete standalone engine in this kit. The provided pieces will give a very realistic rendition of the engine, though, and it will be more than sufficient for viewing under the rear glass. The rear suspension is also fairly complete, with separate brake assemblies, struts, and upper frames. The exhaust is also well engineered, with every part visible being built up from individual pieces. Finally, the rear fender wells are separate, blocking in much of the rear assembly. For the front suspension, this is a bit simpler as less will be visible, even from underneath. You still get separate brakes, struts, and control arms, all of which will look good once tucked away behind the wheels.

With the chassis together, attention can turn to the body. This kit has quite a few additions to the body, as while it is overall quite streamlined, there are plenty of small details. For the inside of the body, there is the windscreen and rear louvers to insert, and Hasegawa has included a nice separate upper piece that holds the rear view mirror. There are also inserts for the headlights to put in place. For the exterior, there are grills for the rear upper scoops, and a separate piece for the lower scoop. The headlights are made up from four pieces each and fit into the aforementioned inserts. There are two drop-in grills on the top of the hood, and separate front and rear bumpers. Of course all the taillights and front turn indicator lights are provided as separate clear parts. On the back end there are a couple more of those self adhesive metal pieces for the Lamborghini name and the Miura SV name. Add in the exhaust pipes and you're ready for paint.

The instructions provide painting instructions for the boxtop scheme, an attractive green Miura. Like all Miuras, this one has a silver edge to the lower body (I have seen this done in gold on a red Miura, as something a bit different). The body itself can either be painted in a mix of Gunze Bright Green and Silver, or in a more complex finish where you start off with a gloss black finish, then top it with Mr Crystal Color XC01 Diamond Silver, over which goes Mr Clear Color GX104 Clear Green. Online image searches of this specific car shows that the latter, while more complex in finishing, will yield a more accurate look. For those wanting a somewhat simpler finish, there are other colors you can choose, from simple black to a bold yellow, striking red, lime green, sunset orange, or even a metallic blue.

This is a great kit of an iconic Lamborghini, one which will go great next to one of the Aoshima LP400 Countach kits. My thanks to Hasegawa USA for the review sample.