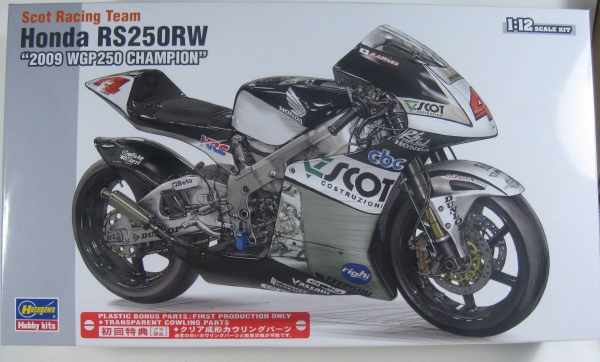 I’ll admit it: I’m not a huge racing fan.  However, that said, whenever I can, I love to watch World Grand Prix motorcycle racing.  There’s something visceral and compelling about seeing racers leaned over in a turn, dragging their knees over the candy canes through a turn only to have them open the throttle on the exit and go from 50mph to 150mph in a few seconds.  No roll cages, no advanced crumple zones, and nothing between them and the road but a hockey puck and some leather.  I’ve modeled a few race bikes in the past from another model maker (Alex Criville’s 500cc Repsol Honda’s from 1998 and 1999, and Kenny Roberts 500cc Yamaha from the 1980’s), so it was with great anticipation I opened the box on Hasegawa’s entry into the race bike market.

In years past, WGP racing was divided into distinct classes, divided by engine capacity.  From 1990 through 2009, the 250cc class was the stepping stone to greatness, and the place where champions were born – riders such as Valentino Rossi, Jorge Lorenzo, and Max Biaggi were champions at 250cc before making their mark on the 500cc circuits.  For the 2010 season, WGP removed the 250cc class replacing it with the new Moto2 class, which specifies a 600cc four-stroke engine to replace the two-stroke 250cc engine used previously.  This kit represents the 2009 bike run by Hiroshi Aoyama, who won the 250cc championship that season. 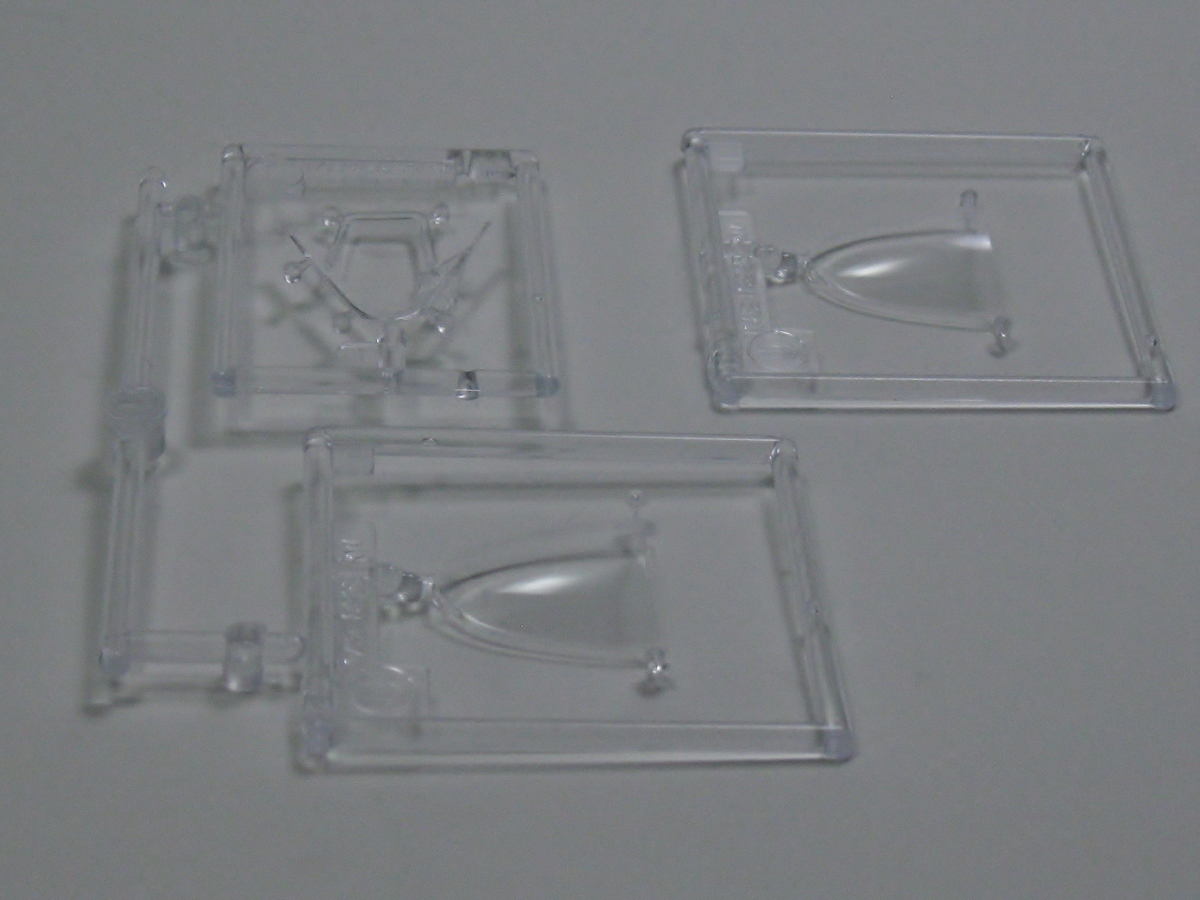 The box reveals some interesting choices.  Two grey sprues and one white sprue contain the bulk of the parts for the bike.  Two clear sprues were given for windshields.  Two separate bags contained hoses, springs, and screws; two rubber tires were provided as well.  As an interesting touch, body panels were provided in both white and clear plastic – more on that later.

Most interestingly for this writer was what was lacking in the kit – chrome.  There are no chrome parts given at all.  The frame and front forks (what would normally be chromed on a race bike) were molded in white and grey plastic, with instructions to paint them “Shine Silver”.  I think I like this approach – most chrome is too shiny to be realistic.  While painting natural metal finishes can be tricky, the intricacies of the frame pieces make this an easier task than, say, an airplane wing or automobile hood.

As expected from Hasegawa, all the parts were very well done and finely engraved, with no sink holes or ejector pin marks on any of the parts.  Looking through the parts, there were some things I was very glad to see.

The bike frame has molded-in weld lines with detail so fine, I couldn’t see it immediately – I had to run my finger nail along it to feel it.  Once painted, a fine black wash over this will add instant depth and realism to the welded frame pieces. 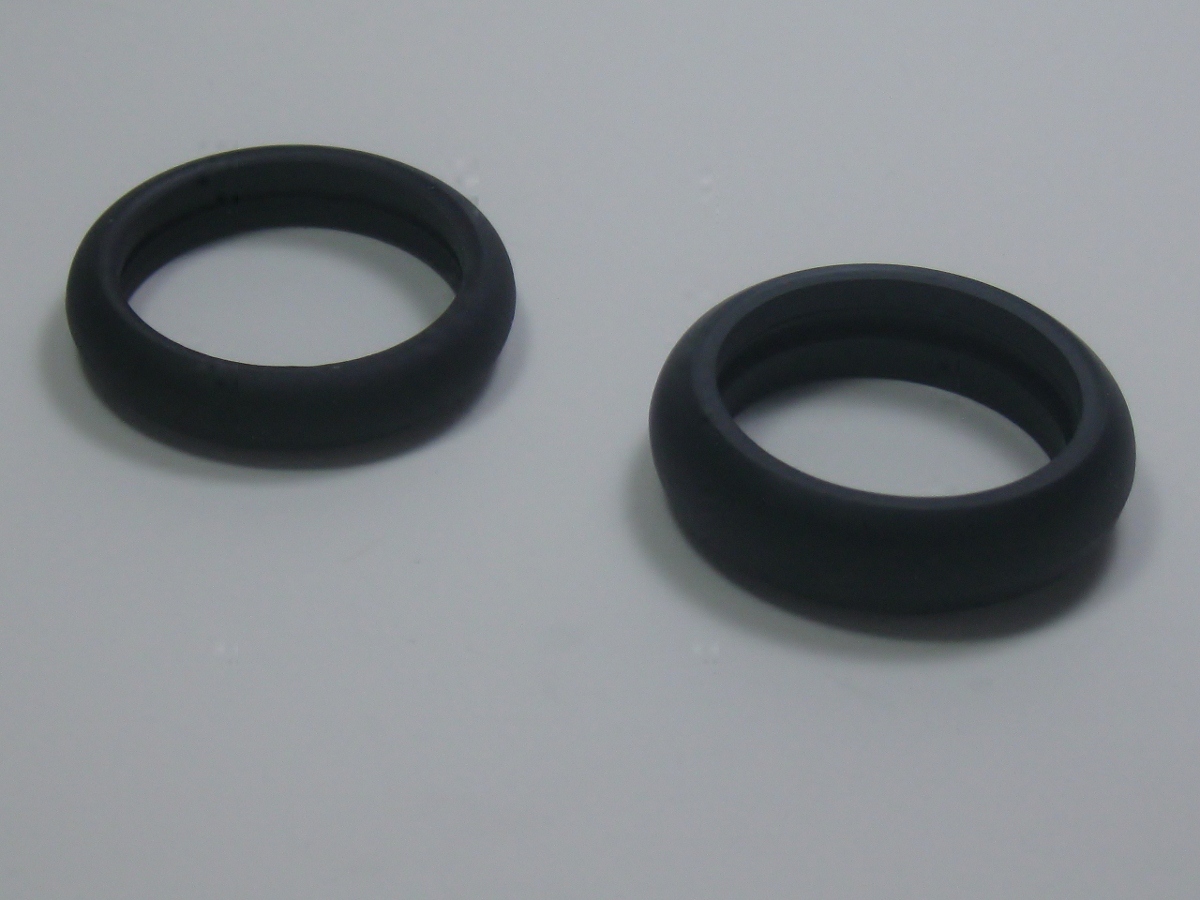 The dual front brake rotors had vents holes molded open – no drilling out rotors for this kit.  Like all race bikes, this bike is a water-bagger (liquid cooled), and the radiator provided has very fine detail on it with no scars or issues at all.  Rubber tires are provided as well. 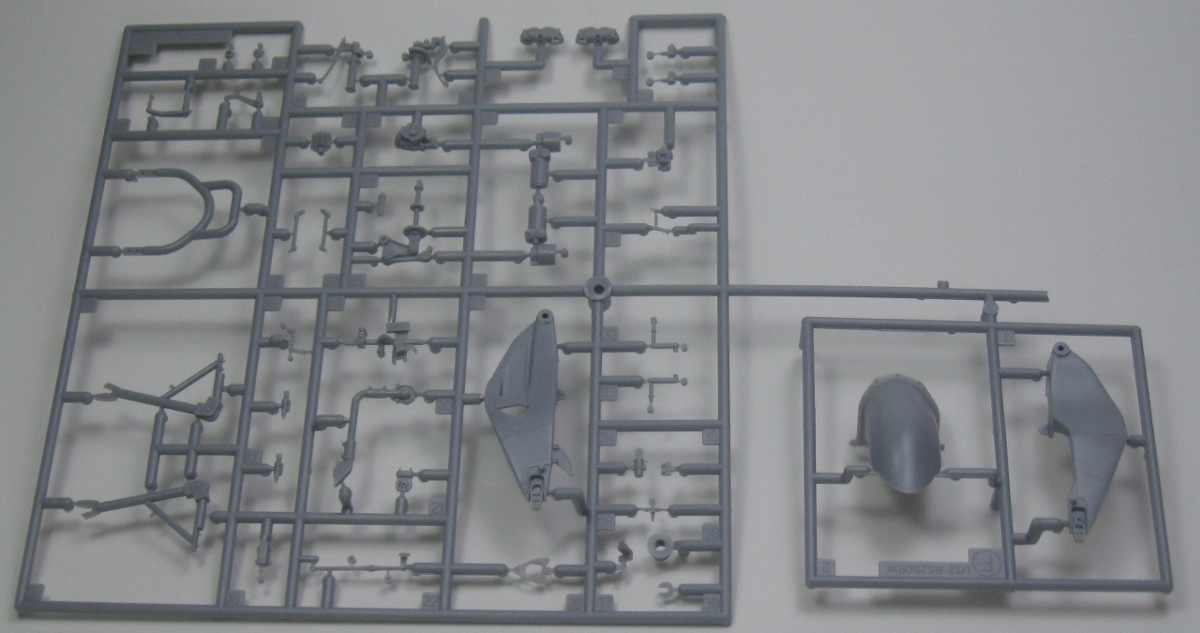 The engine is highly detailed, with 17 of the 145 parts of the kit going to it, and will be greatly enhanced by careful detail painting.  The additional detail provided by the coolant lines will add to the realism in the engine once installed in the frame.  And this is why the clear body panels are a welcome addition – rather than cover the superb detailing of the engine in opaque body panels, the modeler can opt to show them off with clear plastic.  I wish I had this on some of my previous kits. 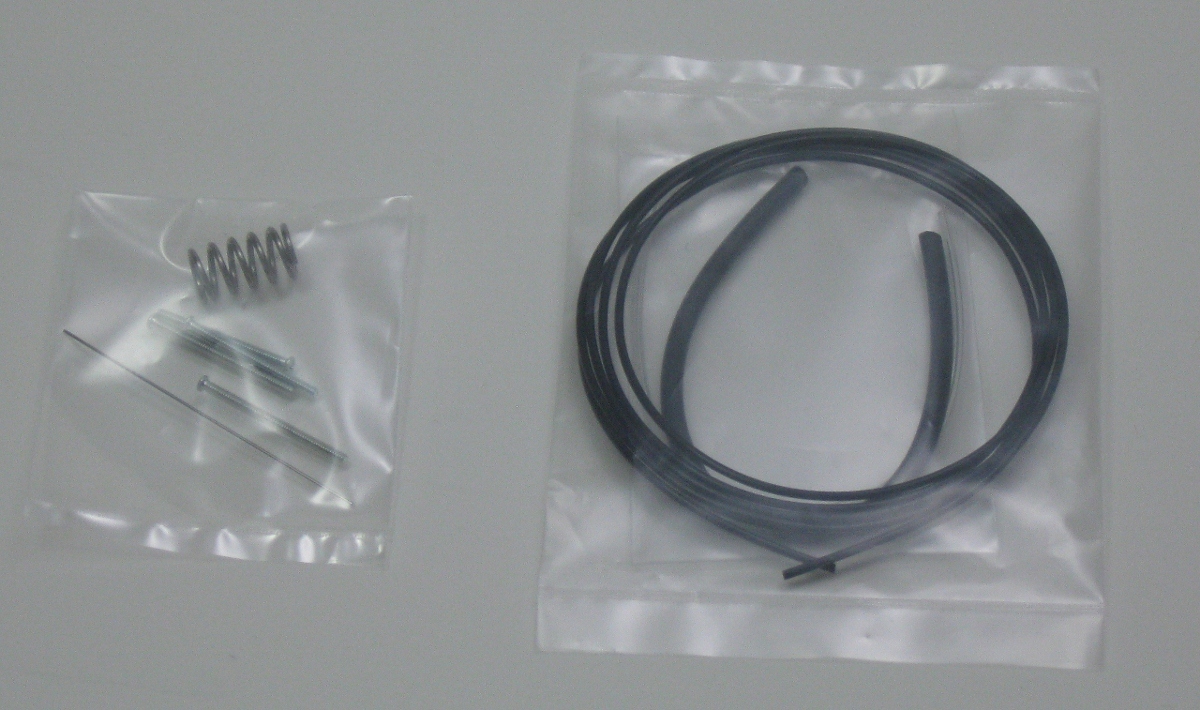 As with other race bike kits, the wheels are held on by screws, and a real spring is given for the rear suspension.  Also in the bag with these parts was the last surprise this kit had for me – a thin piece of stiff wire.  Scanning the instructions, I finally discovered that it’s a hard line representing the stroke sensor that runs from the top of the right front brake cylinder up to the dashboard.

The instructions provided are very complete and detailed.  As with all Japanese kits I’ve done, most of the text is in Japanese, with the most important text duplicated in English, German, French, Spanish, and Italian.  Illustrations provided are very good, but in some places can be tough to read – for example, for the stroke sensor mentioned above, there’s no clear depiction of where the top of it terminates.

Paint colors provided are in GSI Creos and Mr. Color numbers.  I would suggest using https://www.ipmsstockholm.org/colorcharts/stuff_eng_colorcharts_gunze.htm for color conversions to other systems.  The painting instructions given throughout the kit are very well done, and the final painting suggestion (for Hiroshi Aoyama’s 2009 season bike) are extremely detailed and complete, but appear easy to follow. 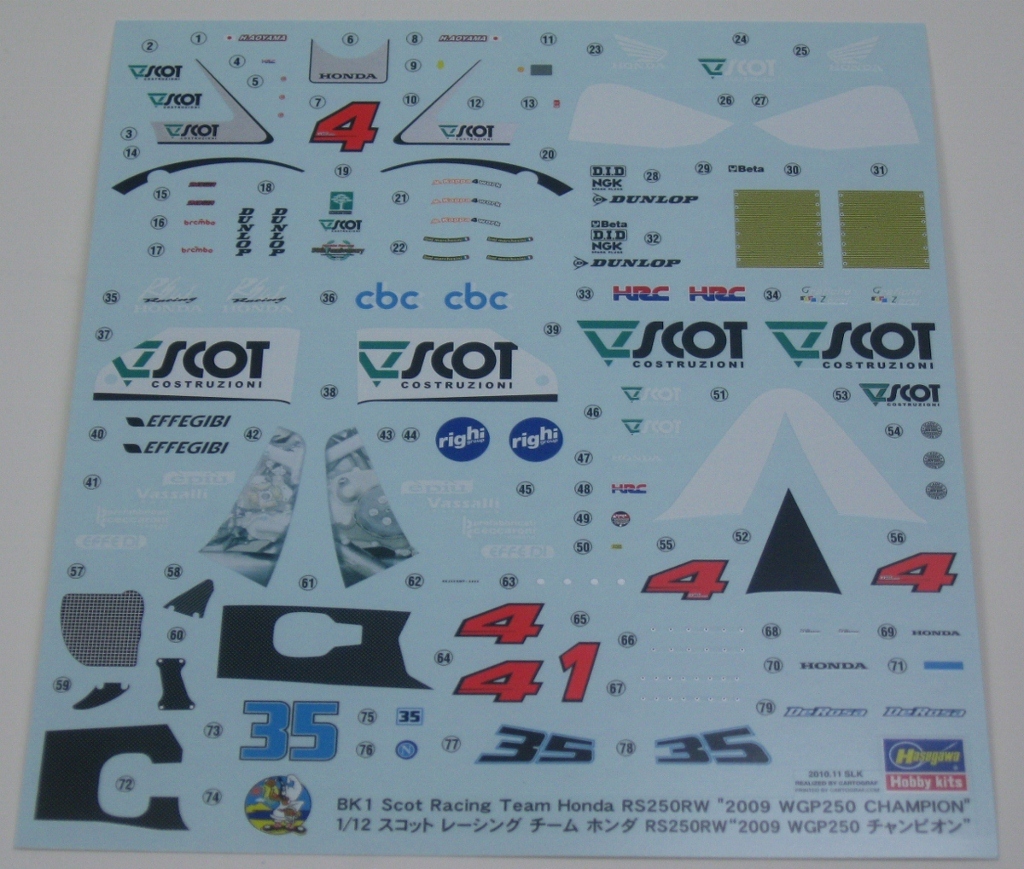 The decals are superb – very thin, with no extra carrier film where it isn’t necessary.  Carbon fiber decals are provided for certain parts, such as wrapped around the mufflers.  The decals also contain the only bit of kit provided chrome, for the Scot logos on the front cowl – sorry for lying earlier.  As with most race bike kits, the decals can be the most challenging part of the build, as they are numerous and need to confirm to compound curves. 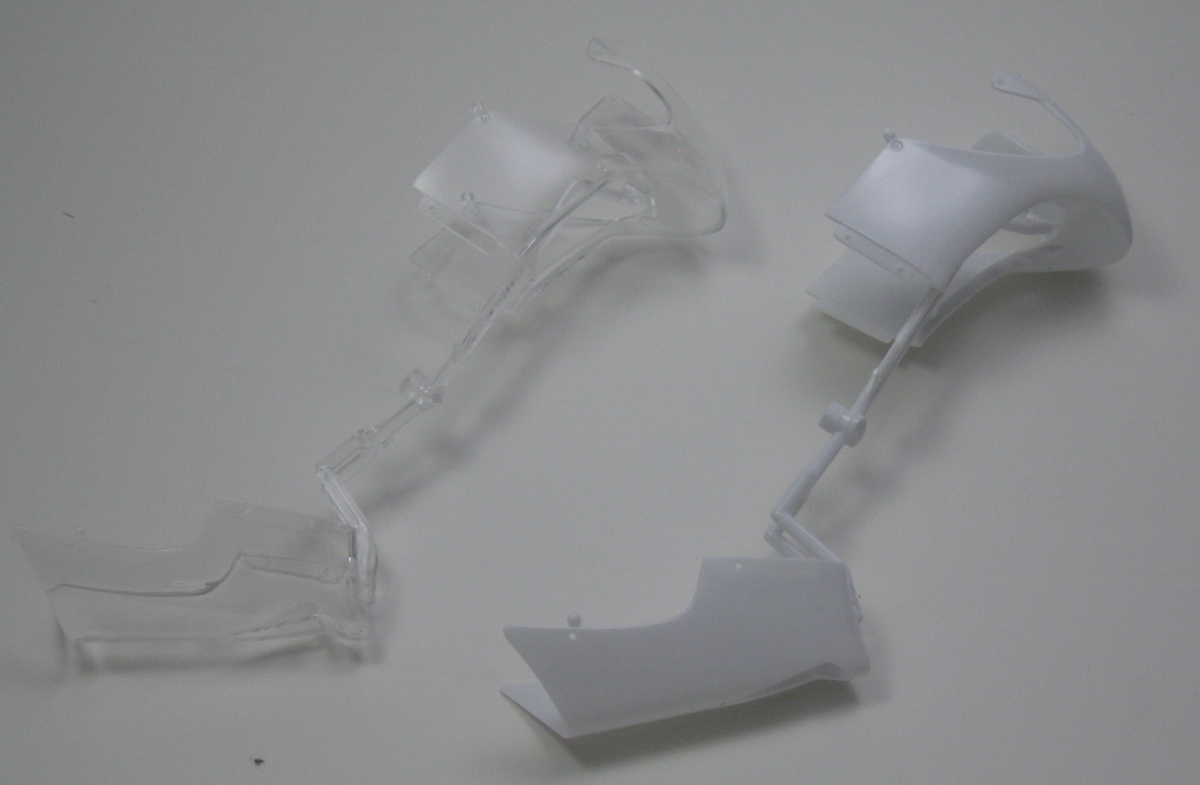 This is an extremely well-engineered kit.  The parts are highly detailed and are executed with near perfection.  The removal of chrome sprues is not missed, and the addition of other details (such as hard lines, carbon fiber details, and clear body panels) adds to the uniqueness of Hasegawa’s offering here.  As WGP moves into the 21st century and changes formats, this last GP250 championship motorcycle is an important subject in WGP racing history, and Hasegawa has executed it with precision and expertise.  I simply cannot wait to build this.

My heartfelt thanks to Hasegawa USA for this review sample.