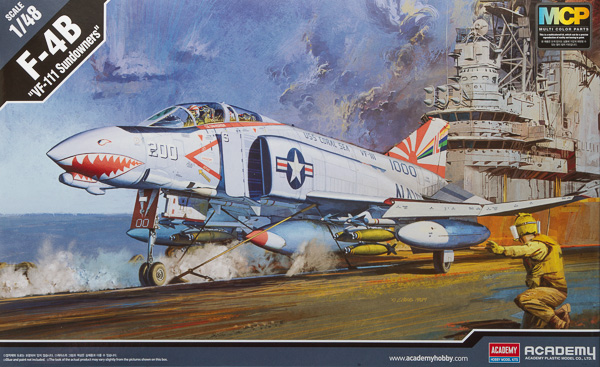 The F-4 Phantom II is probably one of the most impressive combat aircraft to see service in the U.S. military. However, equally impressive is the history of the company that designed and built it. McDonnell is, for all practical purposes, a jet-age new comer when compared to the heavy hitters of the aircraft industry. Founded in 1939, the McDonnell Company's initial production aircraft, the FH-1 Phantom I, began its design history in 1943. Interestingly, the Navy viewed McDonnell's lack of experience as a plus when it came to, what they felt, was the innovation needed for the oncoming jet age. In addition, the Navy did not want to disrupt wartime production of the established aircraft companies with the distraction of a radically new concept in fighter aircraft. From the beginning, McDonnell favored the twin-engine approach and with the exception of the F3H Demon, it has been their design signature.

The F-4 Phantom II design process actually started in 1953 as a company initiated concept for a new Navy attack aircraft. However, the Navy redirected the project in 1955 when it saw a need for an all missile, high-altitude fleet defense interceptor. Designed around the General Electric J79 turbojets and the Sparrow III missile system, the original F-4 configuration looked more like a two seat, twin-engine version of the Demon. However, wind tunnel testing showed the need for drastic design revisions, which led to its distinctive, turned up outer wing panels and turned down tailplanes.

The F-4 prototype first flew in May of 1958, followed by an extensive test and operational evaluation period of the F4H-1 through the end of the decade. Production deliveries of the newly designated F-4B began in the middle of 1961 with VF-74 and VF-114 being the first operational squadrons to receive the Phantom II.  Not surprisingly, the unusual design features, along with its size, were the basis of many unflattering comments directed at the F-4s. However, as they say, the rest is history, and regardless of its appearance, the success of the Phantom II as an air superiority fighter is unquestionable.

I think I can safely say that a "state of the art" accurate 1/48 scale F-4B Phantom II kit appears on many a model builder's wish list, and now, thanks to Academy, the wait for one fulfilling that criteria is finally over. My initial impressions are that the kit looks very accurate and from what I have heard from numerous other sources, this is the common and accepted opinion. Now, as for my initial impressions of the details, a number of things stood out to me when I opened the box, including the extensive amount of parts, the one piece fuselage and yes, the fact that the kit is molded in multi-colored plastic, which I will talk about a little later.

First off, those who have come to expect highly detailed and beautifully cast parts from Academy certainly will not be disappointed, not to mention the fact that there a lot of them. As a side note, I know that the price of kits these days is a growing concern to many modelers, however I would say that Academy certainly gives you your money's worth with this one. The multitude of ordnance choices alone eliminates the need for any aftermarket purchases. Actually, the extensive amount of parts is a bit misleading in that some of the trees have parts for future F-4 variants including one that uses a gun pod. Therefore, make sure you check the black box in the lower right hand corner of the "Parts Locating Diagram" for what is not used on this version.  But, I digress, so back to the F-4B.

This kit is definitely "state of the art", (translation - besides engraved panel lines a lot more assembly is required) that is if you compare it to the only other example of a 1/48 F-4B (the older Hasegawa kit). However, to me this is not a bad thing. Having just recently built that other F-4B I can appreciate the engineering that has gone into the Academy kit, especially when it comes to painting. For example, having separately molded side console panels along with other such related parts makes them easier to both paint and detail without the extra effort needed to mask off whole cockpit tub.

Speaking of painting the issue of casting this kit in multi-colored plastic seems to have generated some controversy. I, for one, am all for this feature, especially when it comes to applying gloss white paint, which has a tendency to be a little on the translucent side. Getting good coverage is going to be a heck of lot easier with white over white than over gray. Likewise, I can see where this will hold true when painting other colors such as metallic titanium over black. Obviously being a "First Look" and not a build article, it is little hard to totally appreciate this feature, but I see it as a positive.

Moving on to additional observations, the kit comes with a number of interesting extras. Included in these are three nicely done figures, (two in the sitting position and one standing), the option of having the in-flight refueling probe in the extended position, and likewise the option of having the aircrafts boarding ladder either extended or retracted. The canopy is also multi-piece and can be either open or closed. Another nice touch is the design of the engine intakes and jet exhausts in that getting a seamless look appears to be relatively easy with very little extra effort needed.  Finally yet importantly the assembly instructions are well illustrated, and look to be easy to follow. However, the highlight of the instructions has got to the inclusion of an arming guide showing how to properly arrange four different ordnance load configurations.

As for any nits, only two stood out to me, and neither is, in my estimation, that significant. The first and probably most noticeable is the treatment of the titanium shielding on the underside of the rear fuselage just aft of the jet nozzles. According to photos and other references, this shielding overlaps like shingles on a roof and is not butt joined as Academy has it. However, these sheets are thin and the raised edge is not that prominent, so with some simple painting techniques that effect can be replicated. The second is an old problem in that the ejection seats lack seat belts. In addition, I have heard that the seats are too wide; however, that evaluation will have to wait until I actually build the kit.

The kit comes with one set of markings for the VF-111 "Sundowners" CAG aircraft of Carrier Air Wing 3 assigned to the USS Coral Sea (CVA-43) circa 1975. To say the decal sheet is extensive is an understatement. It appears that every stencil ever used on the Phantom is included, as are the markings and striping for the various missiles and bombs. Accompanying these markings is an 8½ by 11 two-sided colored four-view guide showing the location of each and every individual decal. However, I did find one item missing from this information and that is a Fed Standard number for the red paint needed to match the red used in the kit's decals. According to one source, gloss insignia red (FS11136) is the red used on the actual aircraft, but considering it has to match the decals some color testing will probably be needed to get it prefect.

This is a great-looking kit of the F-4B, with lots of extra goodies. It comes with a very colorful and extensive set of markings as well as excellent instructions and guides. While some might question the multi colored plastic parts, I personally see this feature as a real positive when it comes to painting especially the gloss white areas. I complement Academy for both their innovation and quality work on this kit. Thanks go out to MRC and Academy for providing the review sample.