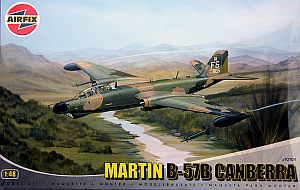 Well, for you fans of the Canberra/B-57 airframes in 1/48 scale, things just keep getting better, especially with the recent appearance of Airfix’s Martin B-57B/G (Kit # 10104).

Made by Martin, the B-57 airframe was a derivative of the successful English Electric Canberra twin-jet medium bomber, which first flew in 1949 and entered operational duties with Britain’s Royal Air Force in 1951.   At that time, the U.S. Air Force’s medium bomber was the piston-engine Douglas A-26 Invader which the U.S. wanted to replace.

The USAF examined which existing jet airframes could replace the A-26 and, of the four that it evaluated (the Martin XB-51, North American B-45 Tornado, Canadian Avro Canada CF-100 Canuck and the British English Electric Canberra), the Canberra was judged the best.   One thing that was unusual about this was that the U.S. had looked beyond its borders for one of its military aircraft.   However, English Electric could not make the numbers required by the USAF so Martin Company was licensed to make the bomber in the U.S.

The B-57A was nearly identical to the Canberra B2 with its fishbowl canopy although it had larger engines and a rotary bomb bay.   The B-57B had more refinements including a tandem-style cockpit for its two crewmen, airbrakes in the rear fuselage instead of on the wings, .50 caliber machineguns (later changed to 20mm cannon) and four hard points under the wings.   The B-57B made its first flight in 1954 and a year later it was operational in squadrons.

The USAF used its B-57s in various ways.   Some A and B versions became reconnaissance aircraft, the RB-57, which saw further refinement as the RB-57D.   The ultimate recce B-57s were the RB-57F and WB-57Fs which had a greatly enlarged wingspan and more powerful TF-33-P-11A turbofan engines.

One variant, called the EB-57, was stuffed with electronic countermeasure equipment and flown on missions that tested America’s air defenses.

Most of the B-57s, though, were the B models, 94 of which saw combat in Vietnam with 51 being lost in combat along with others due to non-combat situations.   In Vietnam, some RB-57s flew with infrared camera systems to detect enemy forces under the program name, “Patricia Lynn.”  Others were made into the B-57G which had various sensors and carried laser-guided bombs.

B-57s were also operated by Pakistan, the Republic of China and, briefly, by the Vietnamese Air Force.

The B-57 had a top speed of nearly 600 mph, an operational ceiling of just over 45,000 feet, a combat radius of 950 miles and a load of 4,500 pounds of bombs in the bomb bay (including nuclear weapons) and 2,800 pounds of weapons under the wings.
Although B-57s were retired from the USAF years ago, two WB-57s continue operations with NASA.

As mentioned, this Airfix kit is the latest 1/48 scale model of the Canberra/B-57 airframe on the market.   When I reviewed Airfix’s Canberra B (I) 8 in the December 2008 Internet Modeler, I noted that the fuselage pieces had cutouts that would allow for other versions.   I’m happy to say that the B-57 has a completely new fuselage all its own so one doesn’t have to worry about making a B-57 from a Canberra fuselage.

What do you get in the kit?   Seven sprues of medium gray styrene, five of which are complete repeats of the Canberra kit (more on that in a bit); a sprue of clear styrene, a huge decal sheet measuring 9 x 15 inches; a 16-page instruction book; and a three-panel, four-color sheet showing the three versions of B-57s you can build from this kit. 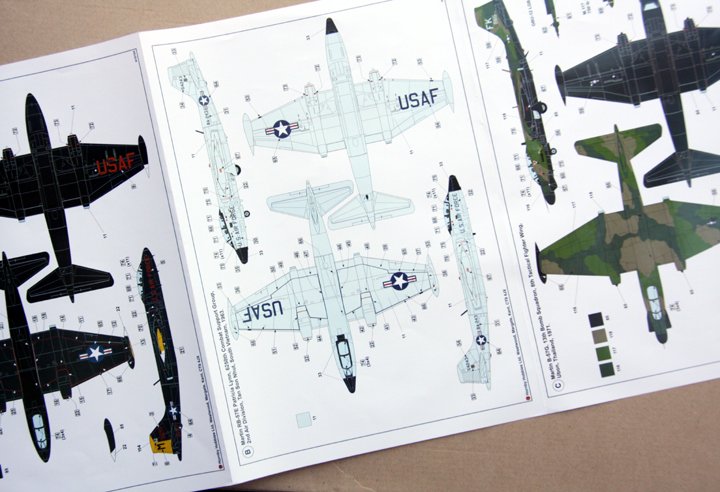 With the pieces and decals in this kit, you can build:
--an all-black B-57B with the 822nd BS, 38th BG that was based in Laon, France from 1966-67;
--a natural metal finish RB-57E with its long “Patricia Lynn” nose that served with the 6250th Combat Support Group, 2nd Air Division in Vietnam in 1963; and
--a B-57G that has a bulbous nose with special sensors under it, different engine intakes and a paint scheme featuring a black belly with the typical three-color Vietnam style camouflage on its upper surfaces. 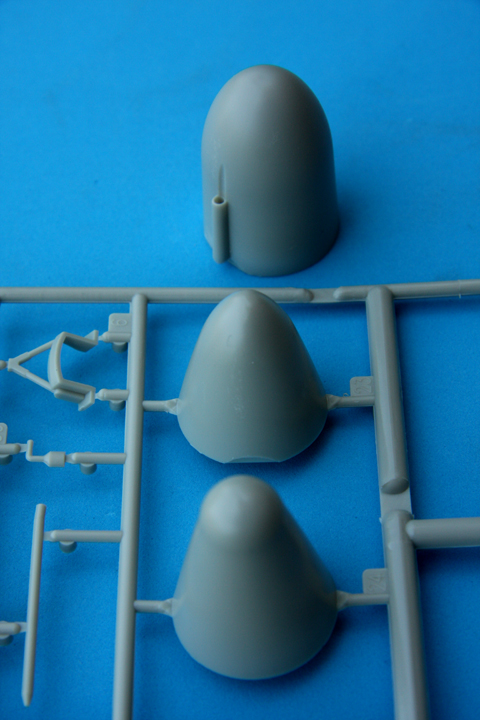 As I mentioned above, five sprues are the same as what’s in the Canberra B (I) 8 kit which is understandable in that these contain the wings, tail plane, control surfaces, wheels, wheel wells, gear doors, bombs (several of which were apparently used by the USAF) and other shared components.   Just like in the Canberra kit, part 41A is the jack stand that fits under the tail like the real jack stands kept the real B-57s from being tail sitters at times so if you don’t want to add weight to the nose (which is very easy to do in the B-57 as compared to the Canberra kit which has the navigator’s/bombardier’s compartment in the nose) or forgot to add the weight there, that little jack stand can do you some good.

For those who want some extra bombs and rockets used by the RAF, you’ll have your share once you’re done with this kit.   As for the RAF bombs being the same as those the Americans used, I don’t know and I’ll let the ordnance experts discuss this topic.

The one unfortunate shared component is the rudder which I noted in the Canberra review has several inscribed lines that some Airfix researcher believes the real aircraft had.   Fortunately, one can easily fill these lines and sand them smooth so the rudder appears like the real thing. 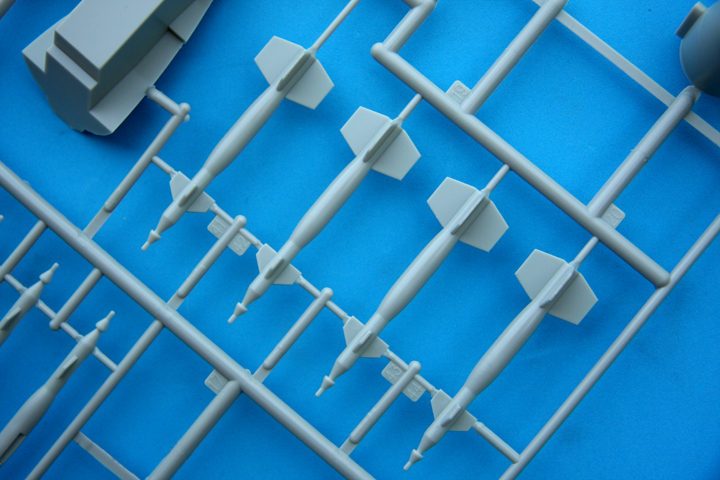 The remaining sprues contain the B-57 fuselage and other pieces unique to the B-57 variants.  Two styles of ejection seats are enclosed--one for the B-57B and RB-57 versions and the other for the B-57G.   Speed brake doors are here so you can position them open or closed.   Noses for the three versions are also provided along with four laser-guided bombs for the B-57G.

Similarly, the kit has two sets of engine intakes which cover the three versions you can build from this kit, 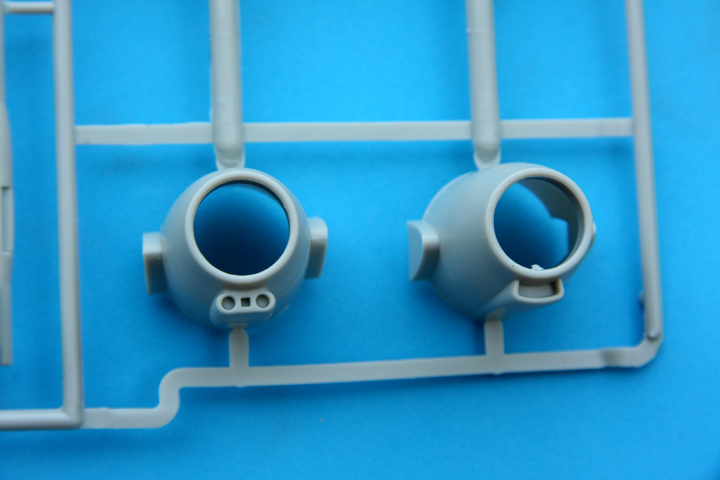 engine fan blades for the American engines, B-57 nose wheel and strut and B-57 cockpit with instrument panels.

The same sprue has four American-style pylons to use under the wings although the real aircraft had as many as eight  and how about this…..if you look at the inside of the bottom halves of the wings, you’ll see each half has four slots that you can open for pylons!

The clear sprue has that big long clamshell canopy, of course, along with the windscreen, wingtip lights and the piece for the B-57G’s sensor nose.

Everything appears well formed with no sight of anything that could compromise a good build.   The inscribed panel lines are wider than I’d like but they’re nothing objectionable, in my opinion. 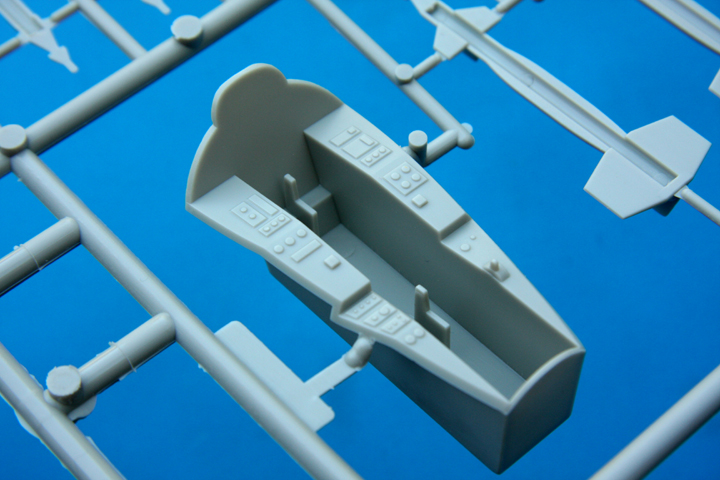 As for the decals, well, everything needed for the kit’s three versions appears to be here including markings common to all three versions.   The wax cover sheet stuck at one small spot to the decal sheet when I pulled it away but that little bit of wax paper will clean off the decal with no problem with a cloth that hardly damp….that’s happened to me in the past with some other kits.

In the past, I have been very dubious about applying colored decals to darkly painted models, like the black B-57B in this case.   With a 1/72 B-57B I built years ago that had red decals, the red became a darker red and hardly stood out from the black paint as compared to the red lettering and markings on the real aircraft which stood out brilliantly against the black paint.   I hope that Airfix’s red decals will be as highly visible as the real markings.   Other than that comment, the registration of the decals look fine and everything appears crisp.

In one small spot, the instructions note that the paint references relate to Humbrol paints, something that’s easy to miss. 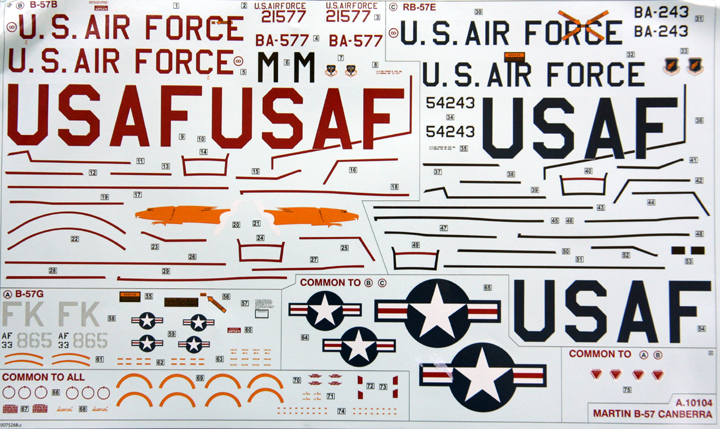 So when you see a number that’s not in a circle and pointing to a part, that’s the Humbrol paint number.

By the way, if you’re interested in building an EB-57, Mike West has a conversion set to create such an aircraft.

Of course, some people want to know how the Airfix B-57 compares to Classic Airframes’ B-57.   So here goes:

3)  The Airfix cockpit detail is okay and rather basic whereas the CA cockpit has good-looking detail, including side instrument panels (which the Airfix kit lacks) and rather detailed ejection seats that fairly depict ejection seats used in some B-57 and RB-57 aircraft: look at page 35 of this document.  Some sources, such as this site,  state the Escapac IC-6 ejection seat was also used in B-57Bs and RB-57Bs and Parts 13M-16M of the Airfix kit--for the B-57G version--resemble this type of seat. 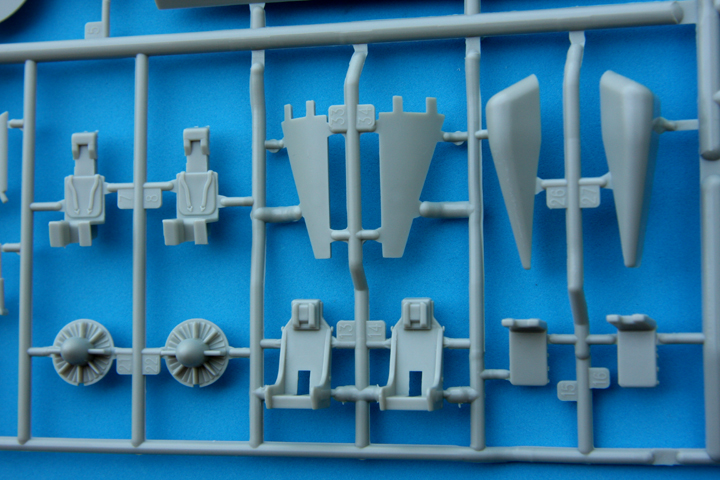 However, I‘m not sure what type of ejection seat that Parts 7M-10M of the Airfix kit--for the B-57B and RB-57B--are supposed to represent.   Other information about ejection seats used in the B-57 airframes is here, here and here.

A note here:  I noticed Airfix also calls for Humbrol 81 to be used on other items like the wheel wells and interiors of the landing gear doors.   So I’m guessing Airfix means yellow zinc chromate rather than pale yellow?   But again, I’ll differ with Airfix because of the few operational B-57Bs I’ve seen, plus the one at the Strategic Air and Space Museum near Ashland, Nebraska, those items (on an aircraft which isn’t restored yet) were green zinc chromate.

6)  The instructions of the Airfix kit show the canopy is to be closed although the CA kit allows it to be shut or, with a strut, open.   I suppose one can fashion a similar strut, of two diameters representing the piston housing and the strut, and position the Airfix canopy open too although the real aircraft’s canopy does not have a small tab at its rear like the Airfix canopy does.   So you‘ll have to cut away that tab and fill in the corresponding hole on the top of the fuselage if you want to show the canopy raised on the Airfix kit.   Actually, I wish Airfix had not put that tab on at all because even when the canopy is closed, that tab is going to show and I don’t believe the real aircraft has anything like that.

8)  The Airfix decals have more details and data than do those in the CA kit which are good in their own right.

I like the way the Airfix kit looks and trust it will build up into a good-looking model, whichever variant you want to make.

I would not doubt that after-market companies will be introducing items to further detail this kit and maybe, just maybe, someday someone will create the super-sized wings and engines of the RB-57F which has a 122-foot wingspan and that measures out to 30-½ inches at 1/48 scale.   Wow, what a monster of a model that would be!

Airfix.com shows the suggested retail price of the kit at £29.99 which equates to about $49 American, depending on the always-changing exchange rates.   I found mine at Greatmodels.com for just over $45.