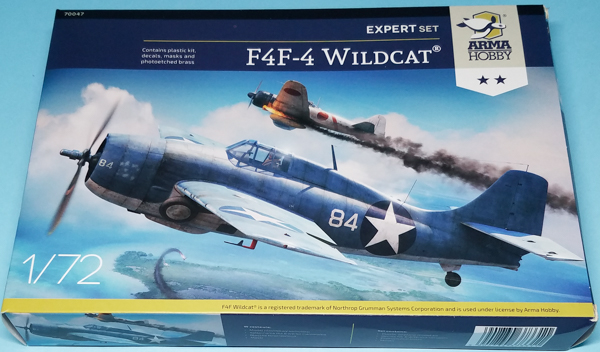 I don't think the actual Grumman F4F Wildcat needs to be introduced. Just be aware that the Arma Hobby kit can now be considered the definitive 1/72 model of this iconic WW2 fighter.

I've reviewed the Army Hobby FM-2 sometime ago. You can refer to that article for the basics of this kit. This release comes with the following, "main" markings:

The kit also comes with the following bonus markings:

The excellent part about this release - besides it being the F4F-4 - is that Arma Hobby learned from their "mistakes" with the FM-2 in terms of their instructions and providing a jig for assembling the landing gear. They have marked the instructions much clearer in terms of where things are to be glued, especially around the engine firewall and landing gear well. Plus adding the jig to help glue the main landing gear leg together is a definite bonus. Whatever you do, don't throw this jig away as you'll want it for when you build your FM-2s.

With the expert set you receive not only the kit plastic, but photoetch and masks, as well. In my opinion, definitely worth the cost. Hopefully the masks will behave, though, since they're vinyl and not the usual "yellow kabuki" tape you find from the likes of Peewit and Eduard.

It's very important to study the instructions prior to building. This will save time in the long run as there are items to remove, as well as options to pay attention to, like opening up the holes in the wing underside halves if you use the external fuel tanks.

Be aware that the designer of the master model has released a set of notes on how to improve the model. There were certain short-cuts taken so this article describes those and what needs to be accomplished. In addition, there are other details that can be added to make the model even more accurate. Not 100% necessary but if you want to take the time, will result in a little more accurate model. Be sure to read the article for all of his advice.

The Arma Hobby F4F-4 is definitely the definitive model of this important WW2 fighter. If you're like me, and you still have the other kits (namely Airfix and Hasegawa) you'll still probably build these, but if you don't have any - or truly want the most accurate Wildcat on your shelf - then Arma Hobby is where it's at.

Huge thanks sent to Arma Hobby for sending the kit to review.