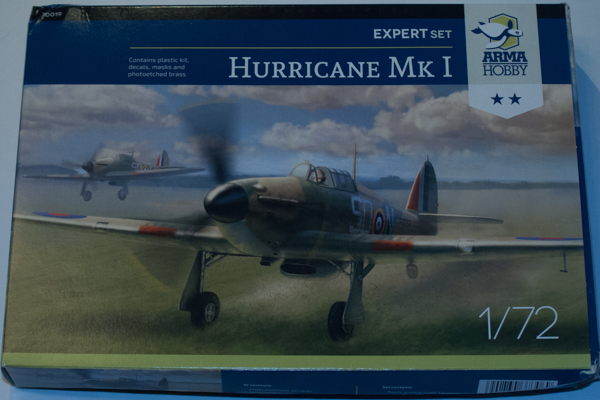 Because the history of the British Hurricane is vast, and others have done better than I will ever be able to, I will leave the history of the type to the reader. I will say that Arma Hobby has released the best-in-scale, 1/72 metal wing Hurricane – heck, the best 1/72 Hurricane overall. I have seen many on-line builds and most agree with my conclusion.

The Arma Hobby 1/72 Hurricane Mk.I Expert Set consists of a sprue of 55 pieces of injected plastic, a clear sprue with eight parts, a photoetch fret containing around 42 parts and a set of masks for both the clear pieces and the wheels/tires. The decals, printed by Techmod, are for four metal wing Hurricane Mk.Is:

All four are finished in the typical camouflage scheme of Dark Green and Earth on top, with Sky undersurfaces. The kit is very nicely molded and after a couple of starts, Arma Hobby was able to get it pretty accurate.

The first steps in the construction sequence starts with assembling the landing gear wells into the lower wing half, and you can tell right from the beginning just how much detail Arma has put into the kit. After it’s assembled (and while the instructions have you add the landing gear prior to joining the wings I would wait until after painting and decaling) and the wing halves joined, construction continues with assembling the cockpit and out-of-the-box it’s pretty complete. Couple the photoetch set that comes with the Expert Set and it will be a very good looking cockpit, something you’ll definitely want to keep the canopy open for. There are separate, injected plastic sidewalls with plenty of photoetch pieces to add to them; a seat that consists of plastic and photoetch; an instrument panel that is constructed of numerous pieces; and finally floor pieces, including the rudder pedals and control stick, that are added to the top of the wing assembly. The seat assembly is then added to one fuselage half and the fuselage halves glued together. After the fuselage is glued to the wing then the rudder/fin and horizontal tail pieces are glued onto the fuselage.

Now the assembled model is turned over and underside pieces added, such as the radiator scoop under the mid-fuselage, the trop filter (if finishing your model as that aircraft), and other small pieces, etc. One really nice aspect is Arma provides not only “lenses” to add into the leading edge landing lights, but separate clear pieces that go over these lenses that slot into the leading edge. Oh, and masks for those, as well. Nice! It is in these last steps that you’ll assemble the prop as well, and it’s here you’ll need to decide if you’re building the de Havilland or Rotol prop (which is naturally based on which decal option you’ll finish your model as).

As I mentioned in the beginning, this is the definitive 1/72 model of a Hurricane Mk.I, specifically the metal wing version. But even so, no other 1/72 Hurricane goes to the level of detail Arma Hobby has with the release of this kit. I have read the fit is pretty good with it as well, so if you’re looking for a metal wing Hurricane – or if you don’t have any model of a Hurricane in your stash – then this is the kit to pick up. I am definitely looking forward to working on mine someday.

Huge, huge thanks to Arma Hobby for supplying the review kit.