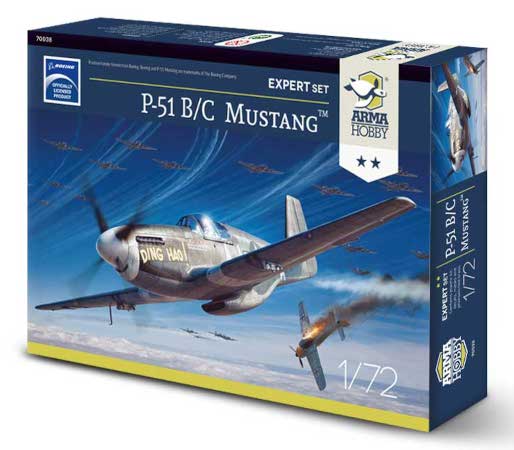 The USAAF came to the recognition that although the Allison powered P-51A Mustang was an excellent low altitude fighter, a different engine and supercharger combination would be necessary for high altitude variants. The 93rd and 102nd P-51 air frames off the North American Aviation production line were reserved for testing with the Packard Merlin engine, a license built version of the British Rolls-Royce Merlin. The Merlin powered XP-51B prototype first flew on November 30, 1942.

Arma Hobby's new P-51 B/C kit comes in a sturdy end-opening box with a nice painting of the famous P-51 B "Ding Hao" dispatching a Focke-Wulf FW190 high over the Reich. The kit consists of 92 injection-molded parts on 3 sprues, a photo-etched fret containing 10 parts, a self-adhesive mask set for wheels and canopy, and a large decal sheet. The surface detail on the wings and fuselage consists of recessed panel lines and rivets where appropriate; this detail is superb. The parts are extremely well molded with no flash and very small sprue attachment points so they'll be easy to remove from the sprues. The wheel wells are deep and commendably busy. You have your choice of fins, with and without the fin fillet. Optional parts include 2 types of drop tanks, under wing bombs, 2 types of exhaust stacks and dropped or raised flaps. The cockpit is a very detailed, multi-piece assembly that will look stunning with an oil wash and careful detail painting.

The clear parts include your choice of the standard canopy or the blown "Malcolm" hood. The PE fret include the seat harness, seat braces and radiator faces.

P-51B-5-NA, 43-6315/AJ-A, "Ding Hao", Maj. James Howard, 356th Fighter Squadron, 354th Fighter Group, Boxted, UK, April 1944. This famous P-51 was painted in bog standard Olive Drab over Neutral Gray with a white forward cowl, spinner and bands on the wings and horizontal stabilizers. This plane had a Malcolm hood with unpainted frames and a white band on the fin and rudder was over painted with fresh Olive Drab paint.

Mustang III, FB244/CV-V, Squadron RAAF, Fano, Italy, April 1945. Kpt. This Mustang III was painted in the RAF colors Ocean Gray and Dark Green over Medium Sea Gray with a red spinner and blue rudder. This plane had a standard hood and no fin fill

The instructions are up to Arma Hobby's high standards. The instructions include a parts map, a well illustrated and logical build sequence and full color profiles of all 6 decal options. Color call outs are for Hataka, AK Real Color, Lifecolor, Mig AMMO, Humbrol, Vallejo and Tamiya paints. Federal Standard (FS) color numbers are also included. My overall impression that this is a top shelf presentation.

Arma Hobby's North American P-51B is a great kit of my favorite Mustang variant. It's accurate and well detailed right out of the box and includes everything you need to build a contest-winning model; take your time and give this model the care and attention it deserves. The decal options are interesting and there's always the aftermarket if none of the options suit your fancy. I recommend this kit and I would like to thank Arma Hobby for the review samples (they sent each IM editor a kit).