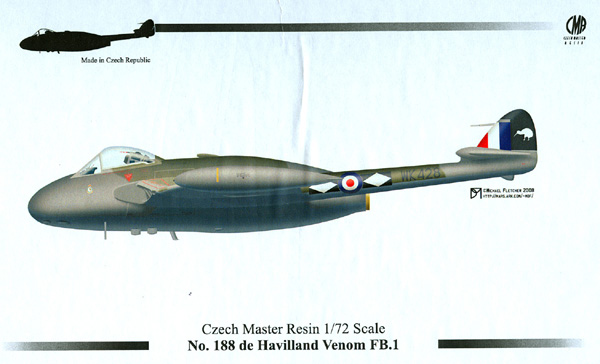 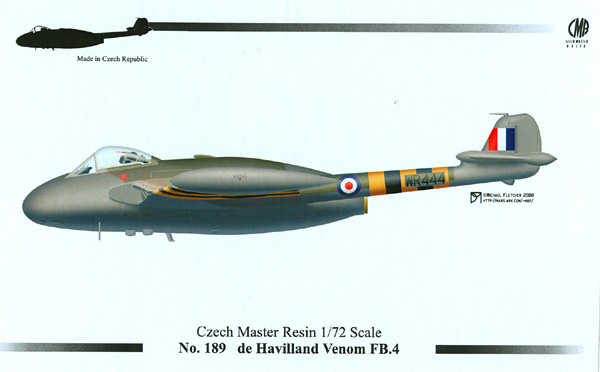 A quick look tells you the De Havilland D.H. 112 Venom is a derivative of the D.H. 100 Vampire, which made its service debut in spring 1946. The Vampire was designed around De Havilland's own centrifugal- flow Goblin engine of about 3,000 pounds static thrust. With De Havilland's new Ghost engine, itself a development of the Goblin, promising thrust on the order of 4,500 pounds, D.H. set to work incorporating the Vampire's service experience into a new plane to be built around the more powerful Ghost. The new plane was originally designated Vampire Mk. 8. The extent of the changes was so great, however, that D.H. created the new model number and name. The Venom was heavier, a bit longer and had better all round performance than the Vampire. The FB. 1 Venom first flew at Hatfield on September 2, 1949. By this time the Ghost had been developed to produce 4,850 pounds of thrust. The Venom entered service in summer 1952 with 11 Sqn. in Wunsdorf, Germany and most Venoms were assigned to units overseas.

The main production variant of the Venom was the FB. 4, which first flew on December 29, 1953. The Venom FB. 4 served with distinction in “Operation Musketeer”, better known to most of us as the Suez War, in 1956. The Venom also acquitted itself well in “Operation Firedog”, in the late fifties in Malaya with 45 Sqn. based at Butterworth in Penang and with 60 Sqn. based at Tengah on Singapore. The RAF began phasing the FB. 4s out of service in 1957. 28 Sqn. flew the last RAF Venom operation from Hong Kong's Kai Tak airport in Kowloon on June 27, 1962

Early in the Venom program the Swiss acquired a license to build both the FB. 4 and its Ghost engine. Swiss Venoms served for over 30 years before being, finally, retired in 1984. De Havilland also sold Venoms to Iraq and Venezuela.

As far as I know these are the first “small” CMR kits, other than their gliders, to be distributed in nice, stout, top-opening, lidded boxes. The contents are well protected. Previously “small” kits were contained in lighter, end-opening boxes.

The two kits are essentially identical with differences as required by the two marks. The FB. 1 kit has the option of a fixed pilot seat or the ejection seat, which was made standard for the FB. 4. The FB. 4 kit includes optional underwing fuel tanks. The kits are quite conventional in their engineering with the pilot/engine pod being cast in halves. The wings, tail and tail booms are each cast in one piece. The Wheel wells are especially commendable as they are, in fact, deep enough to house the retracted landing gear and very well detailed to boot. Each kit contains two vac canopies and two frets of photo-etched parts by Eduard as well as die-cut canopy painting masks also from Eduard. There are 19 and 20 pages, respectively, in each kit of instructional material including several operational photos of FB.1s and many detail photos of the FB. 4. The instructions and the decals provide for six FB. 1 and four FB.4 color schemes. One is for WR407 flown in “Operation Firedog” by 60 Sqn. Another includes WR444 of 249 Sqn. From Akritori, Cyprus with black and yellow Suez stripes. You must mask and paint the stripes, as they are not included on the decal sheet. Both sheets do, however, include the myriad stencils applied to these fighters of the Nifty Fifties.

These are two more fine kits of the quality we have come to expect from Czech Master Resin of subjects dear to our British cousins; they should be very popular in the UK.

Thanks to Czech Master Resin for providing the kits for this review.

·Aeroplane Monthly, June & July 1978; No.19 in the series "The Fighters of the Fifties – De Havilland Venom", Roger Lindsay.