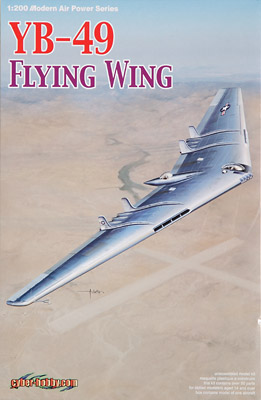 Delays in the Northrop XB-35 program and advances in technology led to Northrop deciding to adapt their existing flying wing design to jet propulsion. The result was the YB-49, an eight-engined flying wing bomber prototype. Two flying examples were built from existing XB-35 wings, replacing the piston engines with jets. Changes were needed in the form of four vertical fins and fences, to stabilize airflow over the top of the wing.

The second YB-49 was lost in a crash on June 5, 1948, killing its crew of five (one of whom was Captain Glen Edwards, whose name was later given to Muroc Air Force Base). The first YB-49 was lost during taxi tests in 1950, leaving no surviving examples. With its short life span, the YB-49 still managed to net a big screen role, appearing in the 1953 movie The War of the Worlds, where the Flying Wing was used to drop an atomic bomb on the Martians. 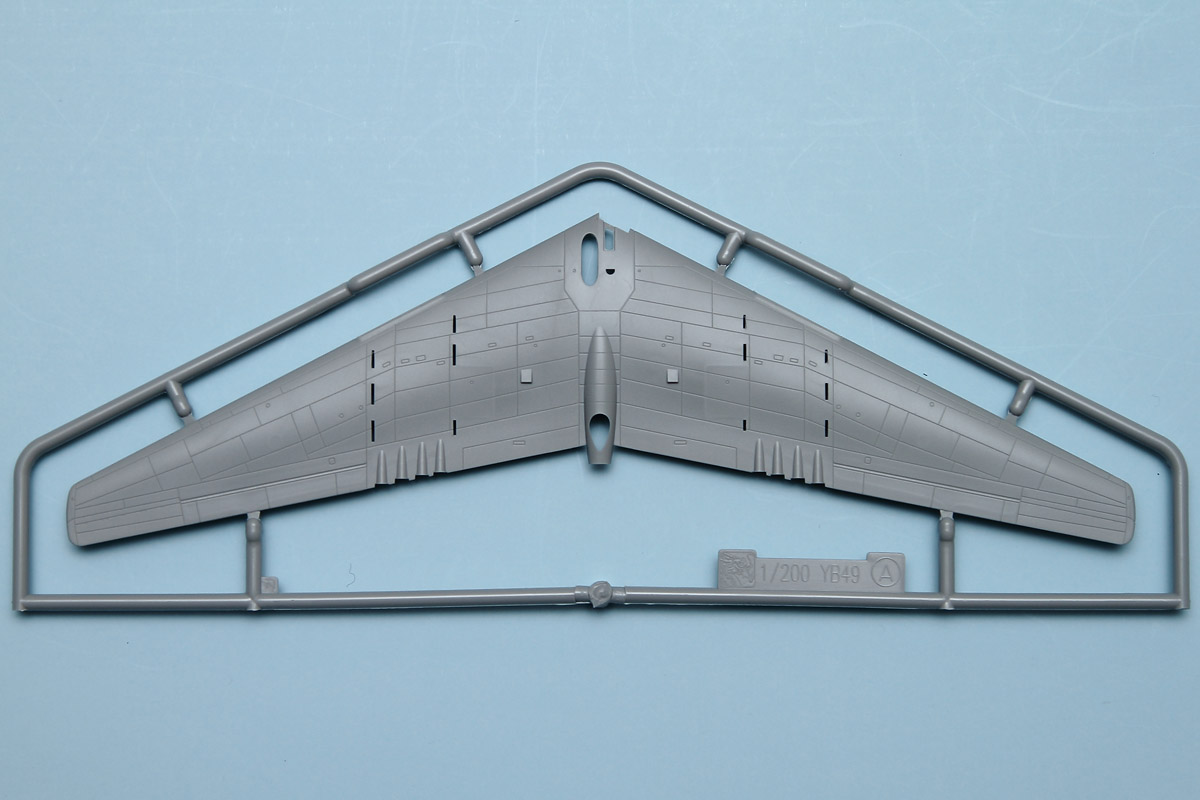 When I saw the build-up example of this kit at the iHobby Expo this year, I thought it was an interesting subject to choose for their 1/200 aircraft line. Now that it is out and available, I can look at it more closely, and without a doubt, it is a very impressive model for the scale. Molded in the usual light gray plastic, with a small sprue of clear, this kit features a detailed cockpit and nice landing gear, with options for gear up or down. The decal sheet provides all the generic markings worn by the YB-49, and the instructions indicate just how simple this will be to build: just one side of a single sheet of paper contains all the steps. 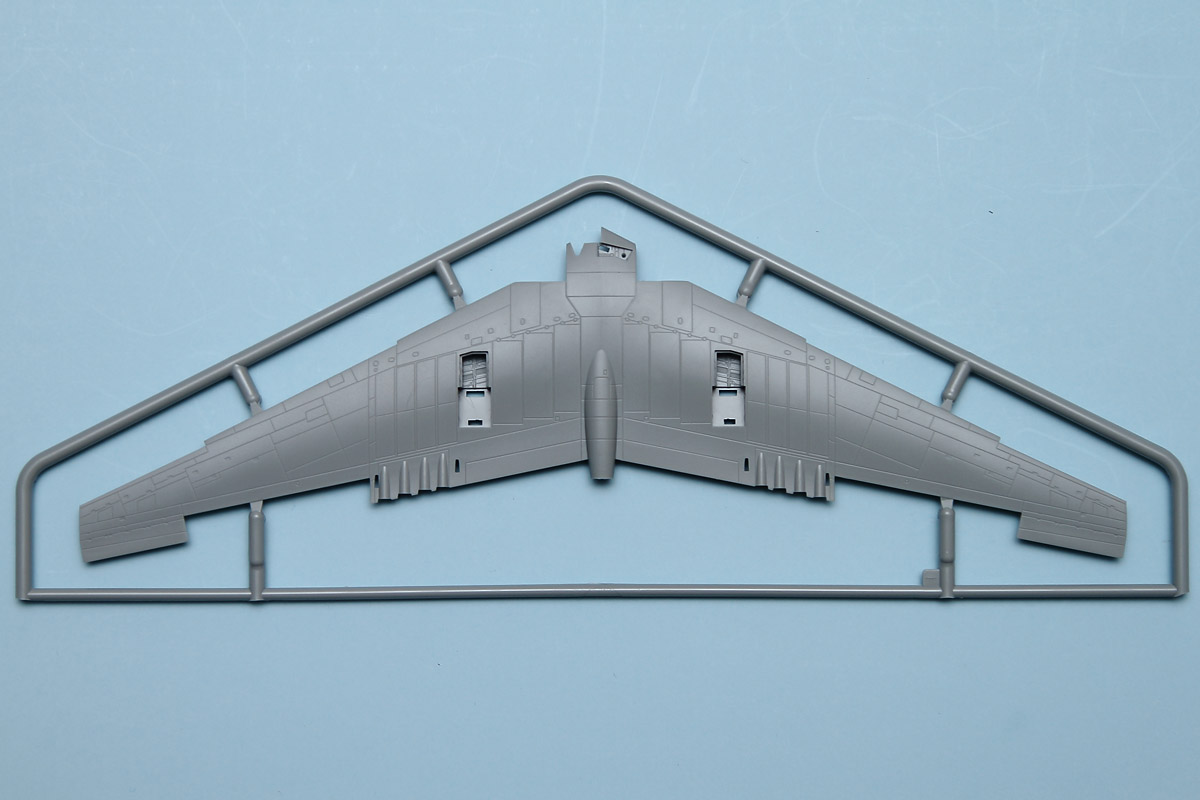 Starting with the interior, the first thing you will note that this kit does, indeed, come with an interior. And it is a surprisingly well detailed one at that. There is a main cockpit floor that has separate wraparound sidewalls. The instrument panel is separate, as is the pilot's seat and control column. Remember, this is 1/200, so all of this detailing is quite small, but it is sufficiently well done to provide a very realistic front cockpit. The rear gunner's station also has detailing in the form of a seat and sight. Both of these assemblies fit into the lower half of the wing. 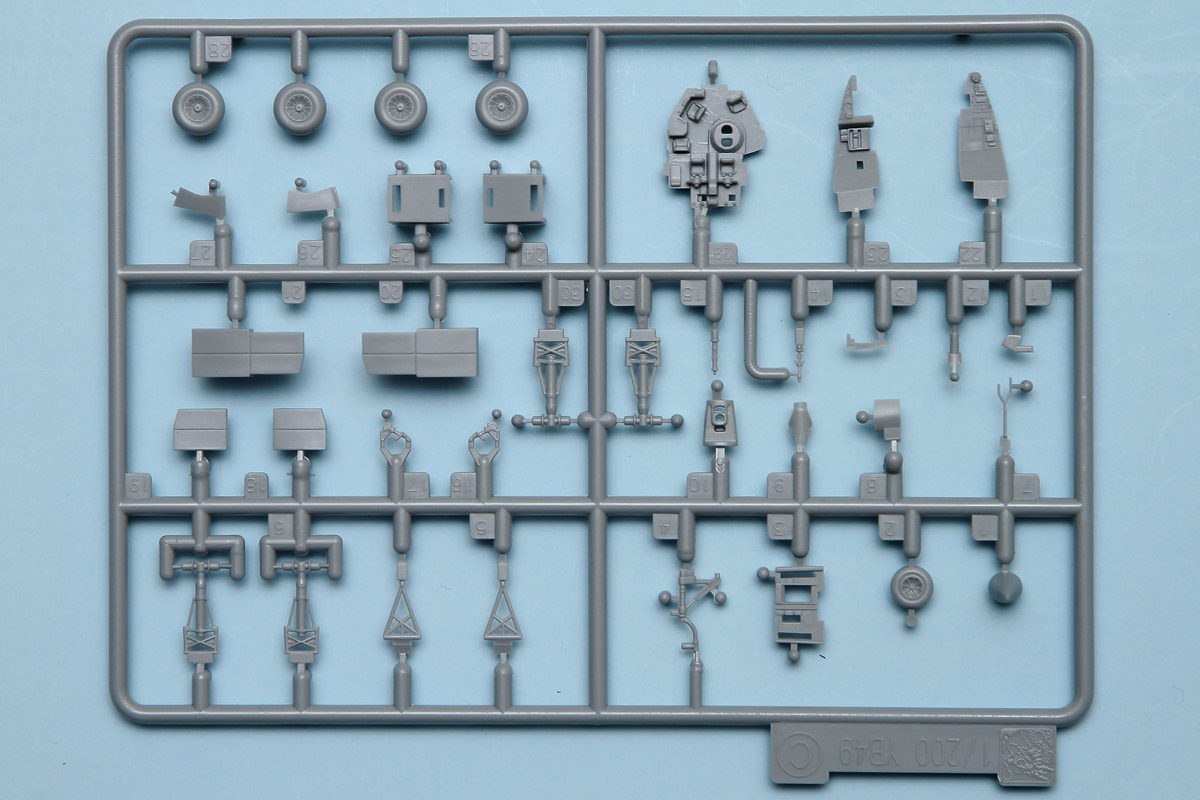 While on the lower half of the wing, the next step will be to add the landing gear. The main gear features a main strut, a separate retraction arm, and a separate oleo scissor. The main wheels are solid and feature nice hub detailing. The completed landing gear assembly fits into a one-piece wheel well insert that fits into the corresponding hole in the wing. This makes for a very positive fit and keeps the alignment perfect. For the nose wheel, this is a bit simpler, with a one-piece strut getting a separate nose wheel and nose gear door. For those wanting to build their plane gear up, separate inserts are provided for the closed gear doors.

With the landing gear and cockpit done, the next step is to put the wing together. Simply glue the top piece to the lower piece, add the four upper fins and four lower fins, the tail cone, eight exhausts, and the clear parts, and your YB-49 is finished. This is a very simple model to build straight out of the box, and realistically, construction could be finished in a day, tops. 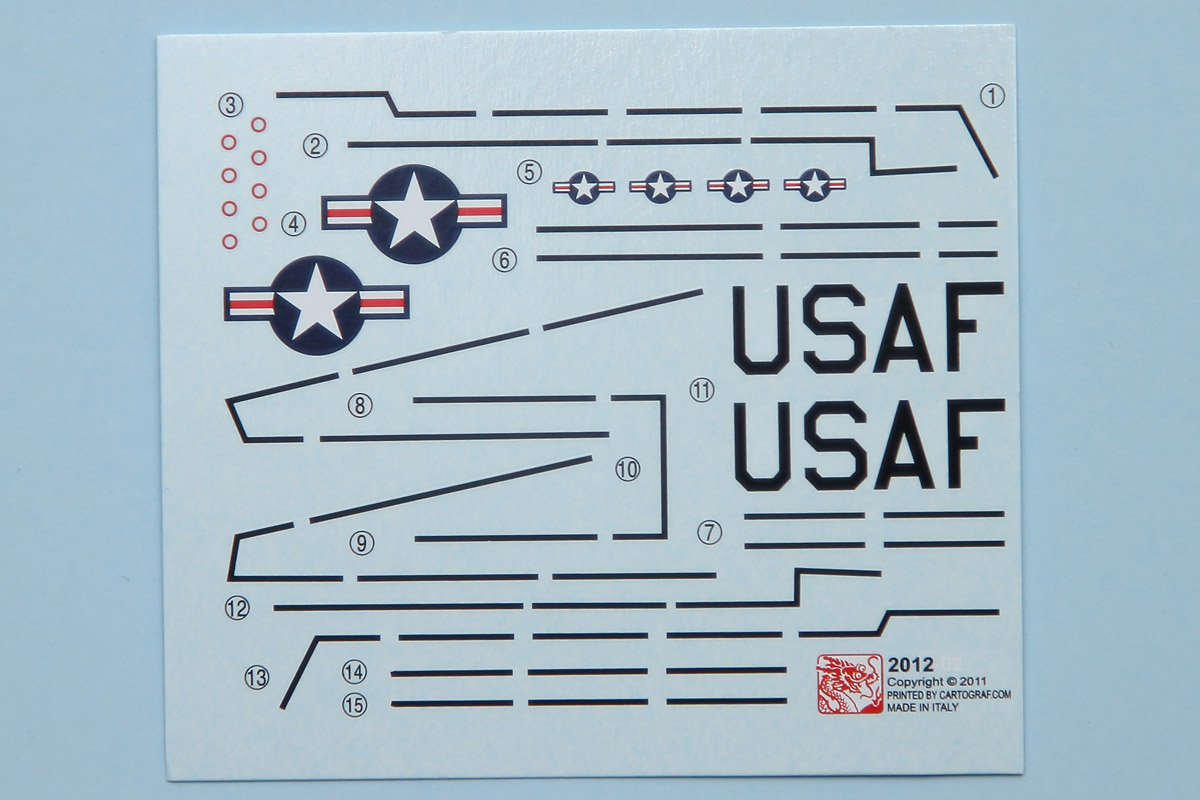 Painting is simple, too: silver overall. In fact, although not marked in the instructions, silver is also the color of the cockpit and wheel wells. Actually, this is all unpainted natural metal, but in this scale, a single shade of silver will be more than adequate for the cockpit and wheel wells. For the wing itself, I would highly recommend using one of the many natural metal finishes that allows for different panel variations, as the large, flat wing will look very bland without some kind of variation. The decals will be simple to apply, consisting of stars and bars, USAF text, and wing walk markings. Unfortunately, the decals are missing the serial number that is carried on the vertical fin. This is rather small, so it will be a bit of a challenge to find spare decals for those. 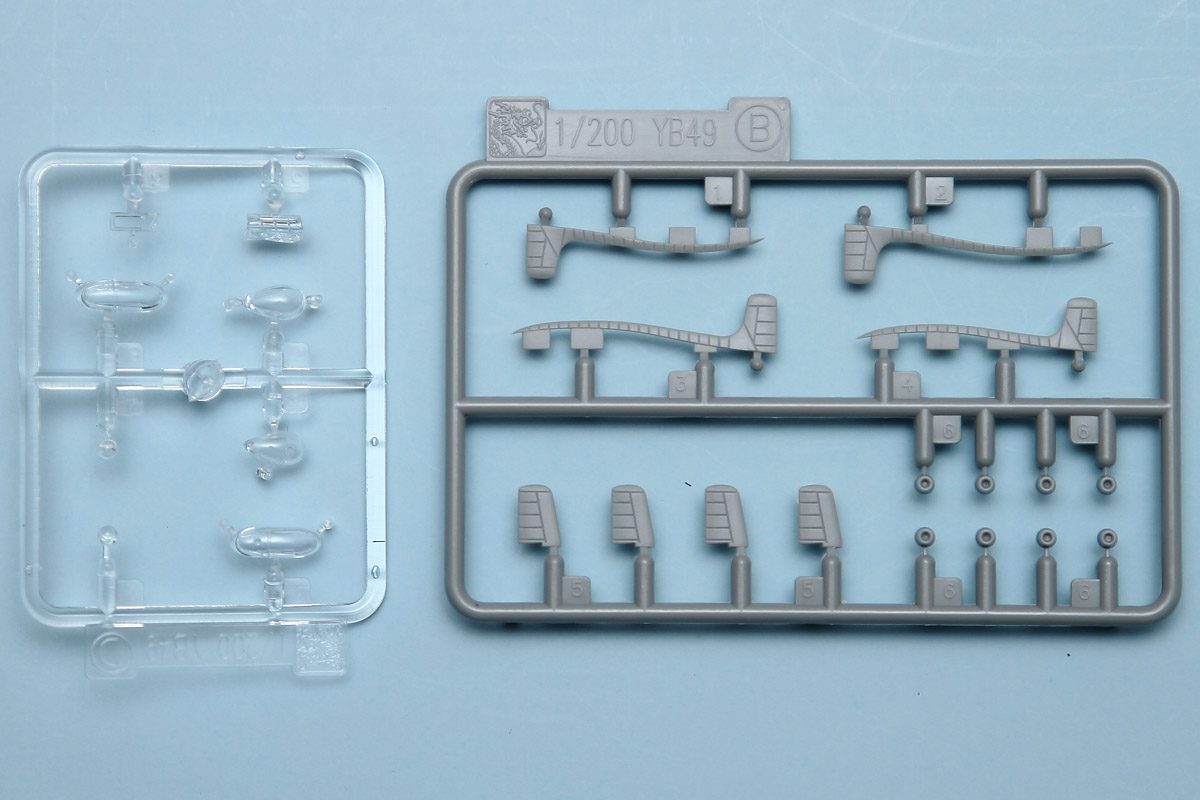 For those wanting to build an accurate representation of the YB-49, the lack of serial numbers will be the least of your concerns, though. While the kit's detailing is excellent and accurate (the cockpit is just about spot-on), there are some problem areas. A common one for many kits with a split upper/lower wing assembly is the trailing edge of the wing; this will need to be thinned down quite a bit. While on the trailing edge, the exhausts are very simplistic and would also benefit from some serious tweaking, perhaps with some brass or steel tubing.

While those areas are understandable and can be fixed without too much effort, the other two mistakes are more challenging to correct. First up, this kit completely missed the wing slots found on the outboard sections of the wing. These are quite prominent in photos showing the underside of the wing, and would require some hefty reworking of the wing leading edge. That leading edge needs even more work further in, though, as the most glaring problem involves the air intakes. In short, they're on upside down. Instead of sloping aft on the lower part of the wing, they slope aft on the upper part of the wing. Fixing this will require some major work with the razor saw, but it can be done by removing the leading edge from each side and flipping it over to attach to the opposite side. As a bit of a silver lining, as long as you're removing the leading edge, you might as well rework those missing slots as well.

As you can see, this kit is something of a mixed bag. On the one hand, it is superbly detailed, with excellent recessed detailing, a beautiful cockpit, and a well engineered landing gear option. A quick test fit shows that it should go together with a minimal amount of effort and little filler. That long list of positives is offset by the leading edge problems, though, so it really comes down to what you, the modeler, are willing to live with. Personally, I feel that fixing the intakes is not that tough a job, and it gives a chance to flex some of those modeling skills that might be getting rusty. My thanks to Dragon Models USA for the review sample.