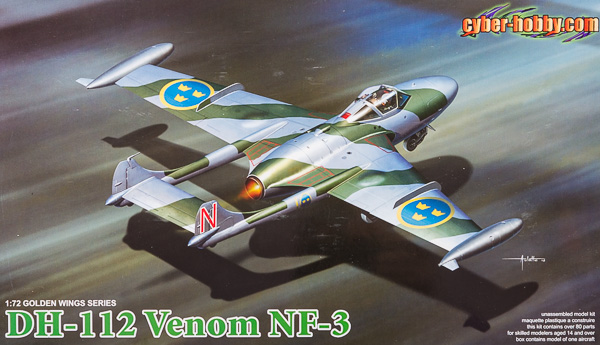 The RAF found itself needing a solid interim fighter to bridge the gap between the de Havilland Vampire and Gloster Meteor and newer swept-wing designs such as the Hawker Hunter. De Havilland stepped in with the DH-112 Venom, which added the more powerful de Havilland Ghost engine and refined the airframe to improve performance. The Venom FB1 entered service in 1952, and the final RAF Venom variant, the FB4, entered service in 1955.

The design lent itself well to the night fighter role, and it was not long after the first flight of the Venom that a night fighter design took shape. Utilizing the fuselage of the two-seat trainer fuselage that was also adapted to the Vampire NF10, the Venom NF2 first flew in 1950. Changes in radar systems and engine improvements led to the Venom NF3, which entered service in 1955. By 1957, though, more potent all weather fighters had arrived, and the last NF3 was retired, replaced by the Gloster Javelin.

When Cyber-Hobby released their Sea Venom FAW.21, I had hoped that we would see a Venom night fighter before long. Well, here it is, and as one might expect, it shares quite a bit with that original Sea Venom release. Molded in light gray plastic, the kit features recessed panel lines, a Ghost engine, and colorful markings for two aircraft.

Right off on opening the box, I noticed that the plastic is pretty much identical to the Sea Venom, with just the addition of a few new parts to build the Venom NF3. So, in essence, you are converting a Sea Venom back to a Venom here. The biggest step here is to chop off the rear end of the fuselage and graft on the new Venom NF3 pieces. There are cut lines on the inside of these parts, but these kind of arrangements are always more challenging than they initially appear. Go slow and test fit often to avoid needing filler here.

The main assembly includes the same cockpit as found in the Sea Venom FAW.21, which means that the seats are still a bit undersized. Perhaps with a closed canopy it won't be quite so apparent, though. The engine is nicely done, and having the top hatch open will help offset any potential problems with a poorly fitting rear section. The nose is separate, providing plenty of room for weight to keep this one on its landing gear, and there are two separate side panels as well. Like with the Sea Venom, the nose shape seems a bit off to my eye, but it isn't enough for me to warrant significant reshaping.

Moving on to the wings, these too are straight from the Sea Venom, which means they're designed to be folded. Of course, the land-based Venom NF3 did not have folding wings, so you'll be affixing these in the down position. The instructions do not mention filling in the wing fold panel lines, though, so you will need to consult your references and see what needs to be done there. The landing gear is actually the first step in the instructions, and these are nicely detailed and look quite sturdy.

With the kit together, it's time to turn towards camouflage and markings. The kit comes with two marking options, one RAF and one Swedish. The RAF example is from 125 Squadron, RAF Stradishall, in 1956, while the Swedish option is from F.1 Wing at Vasteras in 1959. The RAF example is described as camouflaged in Dark Green and Dark Sea Gray over Medium Sea Gray, and features a black nose and colorful 125 Squadron bars on the boom.

The Swedish option does not list the colors used, but that is not a great loss as you can't build that aircraft from this kit. The Swedish J33 was an export version of the Venom NF2, which used a different radar and had a very different nose shape. Early versions had the pointed tail and heavily framed canopy, but was later updated to the NF3 standard, including a slightly better Ghost engine. The radar, however, did not change, so the Swedish Venoms always had the early style radome. Changing this would require significant reshaping of the nose contours, from the windscreen forward.

Despite its flaws, this is still the best injection molded 1/72 Venom NF3 out there (granted, it's the only one, but still). For a straight up Venom NF3, it looks like it will build up into a decent representation of the type, but for those (like me) who were excited to see Swedish markings in the box, be prepared to do quite a bit more work. My thanks to Dragon USA for the review sample.