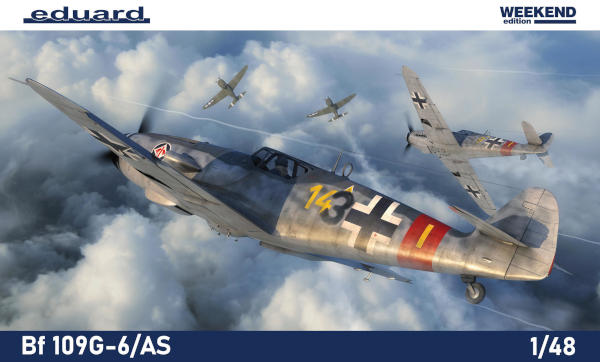 The Messerschmitt Bf109G-6/AS was developed to intercept enemy aircraft at higher altitudes. It entered service with the Luftwaffe in April of 1944. The G-6/AS was converted from standard G-6 aircraft. Some were equipped with the MW-50 (Methanol/Wasser) system and the DB 605AM engine. Others used the FuG 16zy radio set with a Morane antenna underneath the fuselage. These planes were designated G-6/AS/AS/y and served as command aircraft. 686 aircraft were built including 226 built from scratch.

Eduard's new Weekend edition kit comes in their customary stout box with evocative artwork of a pair of Bf109/AS fighter engaged in battle with P-47s high over the Reich. It consists of 184 plastic parts on 5 sprues, one of which is clear.

Eduard's decals are crisp, with bright colors and good registration. There are 3 sheets and you get 2 sets of air frame stencils. There are 5 different aircraft options:

"Red 2", Hptm. Friedrich-Karl Müller, CO of 1./NJGr. 10, Werneuchen, Germany, July1944. The camouflage was RLM 74/75/76 with a wide RLM 23 Red fuselage band. The fuselage sides had a loose 74/75 mottle and the lower surfaces and fuselage were overpainted with black paint. The spinner was black with a white spiral and the spinner backing plate was RLM 70/white. The fin and rudder were RLM 75 with a 74 mottle and both were overpainted with RLM 76.

"Yellow 6", MT-463, ylikersanti (Staff Sergeant) Tapio Järvi, 2/HLeLv 24, Lappeenranta, Finland, March 1945. The camouflage was RLM 74/75/76 with an RLM 04 Yellow fuselage band, forward lower cowl and wing tips The fuselage sides had a loose 74/75 mottle and the spinner was RLM 70 and white and the backing plate was black.

The instructions are up to Eduard's usual standards. The instructions include a parts map, a well illustrated and logical build sequence, full color profiles of all 5 decal options and a stencil application guide. Color call outs are for GSI Creos (Gunze) Aqueous, Mr. Color and Mission Models paints.

The G-6/AS Weekend has 5 exciting decal options and you have your pick of the various Brassin and PE sets if you want to add some detail. I recommend this kit and I would like to thank Eduard for the review sample.