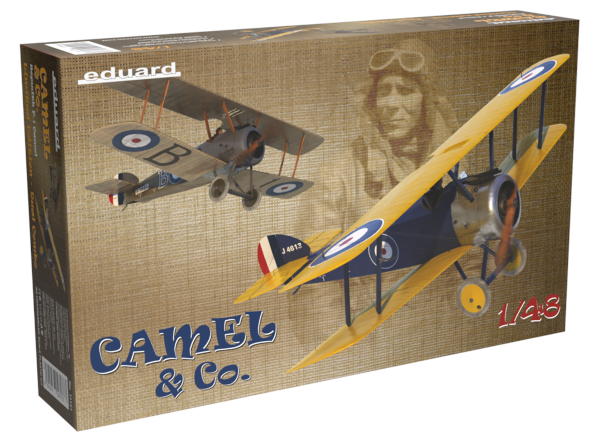 The Sopwith Camel is one of the most iconic World War 1 planes, responsible for destroying 1,294 enemy aircraft between June 1917 and November 1918. The Camel was the most successful fighter employed by either side in terms of sheer victories; at least 2 RFC Camel pilots scored 6 kills in a single day. It was powered by the 130 hp Clerget 9B and 140 hp Clerget 9Bf 9 cylinder air-cooled rotary engines, among other powerplants and was armed with a pair of 0.303-in. Vickers machine guns. It had a maximum speed of 116.5 mph at 6,500 feet, 111 mph at 10,000 feet and 103 mph at 15,000 feet.

The "Camel & Co." boxing is a 2-kit reissue of Eduard's 1/48th scale Sopwith Camel F1. You get 2 complete kits, 2 decal sheets, 2 photo-etched frets and 2 sets of masks. Each kit consists of 152 parts on 4 sprues. This is an impressive kit. The cockpit is a very detailed assembly that will look great with careful painting, oil washes and some careful dry brushing. Photo-etch cockpit upgrades include an instrument panel, wicker seat back and seat harness, gun cocking arms, etc. The fuselage halves have nice internal and external detail. The kit includes 4 different rotary engines (Bentley, Clerget, Gnome and Le Rhone) and 3 cowls. The engines will look great with an oil wash. The wings and control surfaces are well executed, as are the wing struts.

Eduard's decals are crisply printed with bright colors and good registration. There are 2 sheets containing decals for 10 colorful aircraft:

J4613, Capt. James Bigglesworth, No. 266 Sqn RFC, March 1917. This fictional Camel from the imagination of author W.E. Johns had a Blue fuselage, wing struts and landing gear and Yellow lower fuselage and wings. The engine cowling was natural metal.

J1936, Capt. James Bigglesworth, No. 266 Sqn RAF, Summer 1918. Another of author W.E. Johns's fictional aircraft, this Camel had an Olive Drab fuselage and upper wings, natural Wood cockpit area and wing struts. The under surfaces were Doped Linen, the landing gear and forward cowl were Blue. The rear engine cowling was natural metal.

B3889, Capt. Clive F. Collett, B Flight, No. 70 Sqn RFC, Poperinge, France, August 1917. This Camel had a Mahogany fuselage and upper wings and Doped Linen under surfaces The cowling and cockpit area were Neutral Gray and the wing struts were natural Wood.

B7190, Capt. Walter G. R. Hinchcliffe, C Flight, No. 10 (N) Sqn RNAS Téteghem, France, March 1918. This colorful Camel had an Olive Drab fuselage and upper wings and Doped Linen under surfaces The cowling and cockpit area were white with Blue stripes. The wing struts were natural Wood. The wing center and tail surfaces were Blue with a thick white outline.

B3893, Capt. Arthur R. Brown, No. 9 (N) Sqn RNAS, Leffrinckoucke, France, September 1917. Another colorful plane, this Camel had a Red forward fuselage and cowl with natural Wood cockpit area and wing struts. The upper wings and tail were Olive Drab with Doped Linen under surfaces

N6377, Capt. Harold F. Beamish, No. 3 (N) Sqn RNAS, Furnes, Belgium, September 1917. This Camel had a Blue/natural metal cowl, natural Wood forward fuselage and and wing struts. The upper wings and mid fuselage were Olive Drab with Doped Linen under surfaces The aft fuselage was white and the tail upper surfaces were Blue.

J1471, 185th Aero Sqn USAS, Colombey-les-Belles, France, March 1919. This Camel had a White cowl and main fuselage with a Wood forward fuselage and Neutral Gray wing struts. The upper wings and tail surfaces were Olive Drab and the under surfaces were Doped Linen.

The instructions are up to Eduard's usual standards. The instructions include a parts map, a well illustrated and logical build sequence and 12 full color profiles. Color callouts are for GSI Creos (Gunze) Aqueous, Mr. Color and Mission Models paints.

Eduard's Camel is a superb kit. It is accurate and well detailed. Add in 10 colorful decal options, masks and photo-etch and you have the makings of a fun build. It is helpful to have experience rigging biplanes before taking on a model with this aaount of rigging. I recommend this Dual Combo kit and I would like to thank Eduard for the review sample.