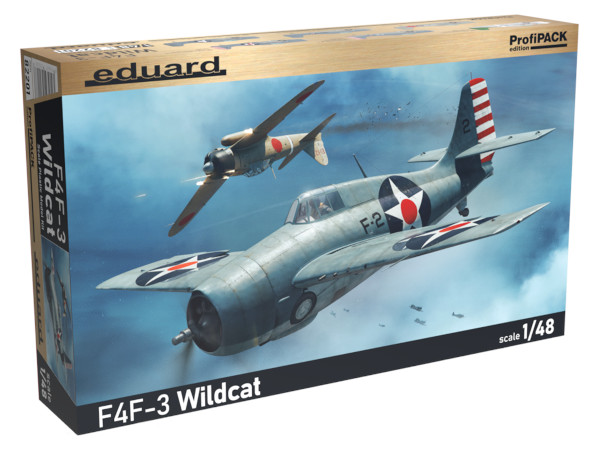 Grumman Aircraft delivered the first F4F-3 Wildcats in February 1940. The F4F-3 had non-folding wings and armament of 4 .50 machine guns in the wing. It was powered by the 1200 horsepower Pratt & Whitney XR-1830-76 radial engine with a 2 stage supercharger. The Wildcat had a maximum speed of 331 mph, a range of 845 miles, a rate of climb of 2,303 feet per minute and a service ceiling of 39,500 feet. The French ordered the F4F-3 before the USAAF, but these aircraft were delivered instead to Great Britain after the fall of France. The F4F-3 Wildcat, while outclassed by the more nimble and manoeverable A6M Zeke, was heavily armored and was able to absorb a lot of punishment.

You get 176 parts in the box. 125 of them are plastic on 6 sprues. There are 50 parts on a single photo-etch fret, plus a small sheet of rice paper masks for the windscreen, canopy and the mainwheels. The surface detail of the wings and fuselage consists of delicate recessed panel lines and rivets along with raised panels on both the fuselage and the wings.This detail is well executed and will look stunning under thinly applied paint and panel line washes.

The cockpit is a major focal point of this kit. It is busy and has superb detail. You can use the kit's instrument panel decal or opt for the PE "sandwich". The PE fret includes the seat harness (for both Early and Late variants), throttle quadrant and major elements of the fuselage side consoles.

The F4F-3 had rather complex landing gear and the kit captures it very well. The wing spars are integrally molded with the rear wheel wall; the engine mount also attaches to this wall. The landing gear chains are installed here too. The fabric ailerons, rudder and horizontal stabilizers are molded separately and the fabric effect is convincing.

The 14 cylinder 1,000 horsepower Pratt & Whitney R-1830-66 Twin Wasp radial engine is assembled from 4 well detailed parts which, like the cockpit, will look great with an oil wash and careful dry brushing. The engine attaches to the fuselage front and it in turn is enclosed in a 3 piece cowling; there are 3 different cowl rings and cowling sides to choose from.

"III-F-3", Army-Navy maneuvers, Louisiana, United States, November 1941. This Wildcat was overall Light Gray with Red crosses on the fuselage sides and the upper and lower wings.

"F-2", BuNo 2531, Lt. Elbert S.McCuskey, VF-42, USS Yorktown (CV-5), May 1942. This F4F-3 was painted Blue Gray over Light Gray with Red and White stripes on the rudder. The national insignia were oversize, spanning the height of the fuselage and the width of the wings.

The large decal sheets include the 6 decal options plus the airframe stencils. The rice paper masks are for the windscreen, canopy and the wheel hubs. The instructions are well illustrated with a logical assembly sequence. Color callouts are for GSI Creos (Gunze) Aqeous and Mr. Color and Mission Models paints.

Eduard's new F4F-3 Wildcat is a cut above the Hobby Boss kit and it is accurate and well detailed. Since this is the ProfiPACK boxing everything you need is right in the box, but Eduard caters to those afflicted with AMS (Advanced Modelers Syndrome) and there are Brassin, Look and Space aftermarket sets to choose from. I recommend this kit and I would like to thank Eduard for the review sample.