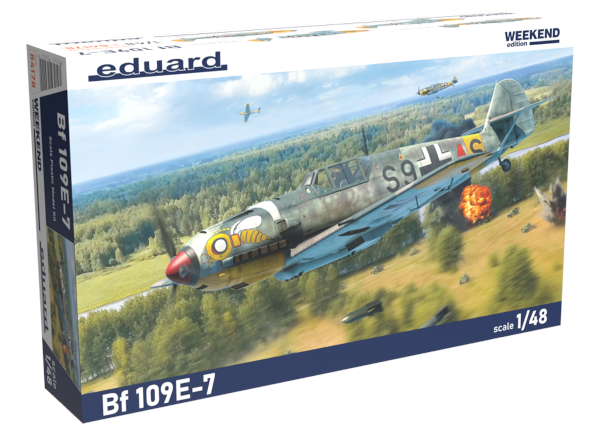 This is a reissue of Eduard's Messerschmitt Bf109E-7 as a Weekend edition. It consists of 192 parts, 143 of which are plastic on 5 sprues, plus a tiny fret of 10 photo-etch pieces. 26 of the plastic parts are surplus and destined for your spares box.

The surplus parts are applicable to later Emil variants such as the E-4 and E-7. They include the 300 litre drop tank and rack, the ETC 50/VIIId and ETC 500/IXb bomb racks, and a single SC 250 and 4 SC 50 bombs. The Emil was pressed into service during the Battle of Britain, so these bombs and racks cater to the fighter/bomber variants while the drop tank is for the late E-7. The clear sprue includes 6 parts, including the armored windscreen of the E-4 and E-7.

Eduard's injection molding is superb. The surface detail consists of rivets and both raised and recessed panel lines where appropriate. The rudder and ailerons are molded separately and the fabric effect is well depicted. The wing radiator flaps and leading edge slats are separate pieces. The kit includes a complete engine and it will be an impressive sight with wiring and plumbing. The engine area also includes the upper cowling mounted MG 17 machine guns. You can build the model with an open cowling and machine gun bay. You get most of the makings of a convincing maintenance diorama. The photo-etch parts inlcude bomb fins and the tropical fliter's exterior.

"S9 + AS", Bf109E-7/B, 8./ZG 1, Belgorod, Soviet Union, June 1942. This Emil fighter/bomber was painted in the mid War colors of RLM 74 and 75 over RLM 76 with a dense 74/75 mottle. The lower cowl, lower wing tips and fuselage ID band were RLM 04 Yellow. The spinner was RLM 23 Red with a black backing plate and the cowl featured elaborate Wespe (Wasp) nose art. The canopy had the optional armored windscreen.

"Black 1", Bf109E-7/Trop, Hptm. Erich Gerlitz, CO of 2./JG 27 3, Ain-el-Gazala, Libya summer1941. This Tropicalised Emil had the classic North African theatre colors of RLM 78/79 with large RLM 80 Dark Green mottles on the upper fuselage and wings. The cowlings and rudder were RLM 04 Yellow and the fuselage band was white. The spinner and backing plate were RLM 23 Red.

The 2 decal sheets (one for markings and one for air frame stencils) are up to Eduard's usual standards with crisp, bright colors and blacks. They are legible and in-register.

The Messerschmitt Bf109 Emil is one of my favorite World War II planes and I'm happy to see the E-7 again. It is accurate and well detailed. You can produce a great model right out of the box or you can upgrade the kit with some of Eduard's Brassin and PE sets. The Emil was a colorful aircraft and all of the decal options are interesting. If you don't like the kit markings there are plenty of aftermarket sheets to choose from. I recommend this kit and I would like to thank Eduard for the review sample.