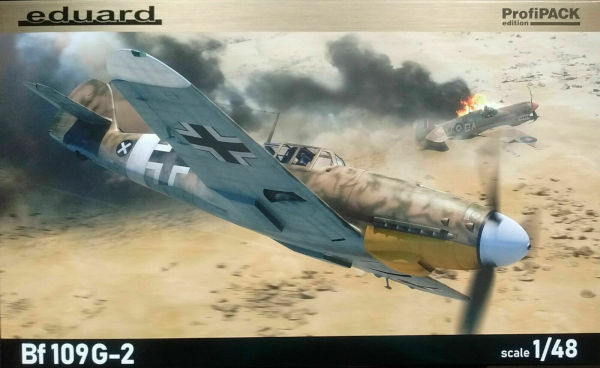 The Messerschmitt Bf109G-2 was a non-pressurized fighter which reached operational status several weeks before the pressurized Bf109G-1. The G-2 was powered by the 1,475 hp Daimler-Benz DB-601a inverted vee-12 cylinder engine and was armed with the engine mounted 20MM MG 151/20 cannon and a pair of cowling mounted MG 17 machine guns.

Many pilots felt that the G-2 was underarmed so Messerschmitt mounted an MG 151 cannon under each wing. The resulting modification was called the R-6 or “Kannonenboot” (Cannon boat) option. The G-2 rapidly replaced the Friedrich in service. JG 2 Richtofen received their first Gustavs in late April 1942.

Eduard's new ProfiPACK G-2 kit comes in a stout box with cool artwork of a Bf109G-2 fighter buzzing the P-40 it just has downed, somewhere in North Africa. It consists of 184 plastic parts on 5 sprues, one of which is clear.

The kit consists of 246 parts. 195 of the parts are injection molded plastic on 5 sprues. There are also 50 parts on a single photo-etch fret. Some of these parts are pre-painted and you also get a rice paper mask set.

The surface detail on the wings and fuselage consists of recessed panel lines and rivets and this detail is superb. The wheel wells are deep, multi-piece moldings that are convincing in their complexity. The wing leading edge slats are separate pieces.

The clear parts include 2 gunsights, 3 different windscreens, the fuel return line, the "Galland Panzer" canopy armor and 3 different Erla Haube canopies, which are destined for the spare parts bin as they're not applicable to the G-2 variant.

Eduard's decals are crisply printed, with bright colors and good registration. There are 2 sheets, one of which provides 2 sets of air frame stencils. The main decal sheet includes 5 different aircraft options, 4 of which sport the under wing "Gondola" cannon:

"Yellow 10", G-2/R-6/trop, W.Nr. 13916, Fw. Hans Döbrich, 6../JG 5, Alakurtti, Finland, February 1943. This Kannonenboote had RLM 74/75/76 camouflage with white temporary distemper paint sprayed over all of the upper surfaces. The wingtips and lower cowl were RLM 04 Yellow and the spinner and backing plate were 50/50 white and RLM 70 Dark Green. The windscreen and canopy were left in their camouflage colors.

The instructions are up to Eduard's usual standards. The instructions include a parts map, a well illustrated and logical build sequence, full color profiles of all 4 decal options and a stencil application guide. Color callouts are for GSI Creos (Gunze) Aqueous, Mr. Color and Mission Models paints.

Eduard's Messerschmitt Bf109G-2 is a great kit. It's accurate and well detailed right out of the box and if you are so inclined you can choose from Eduard's numerous photo-etched and Brassin enhancements to add even more detail. I recommend this kit, and I would like to thank Eduard for providing the review sample.