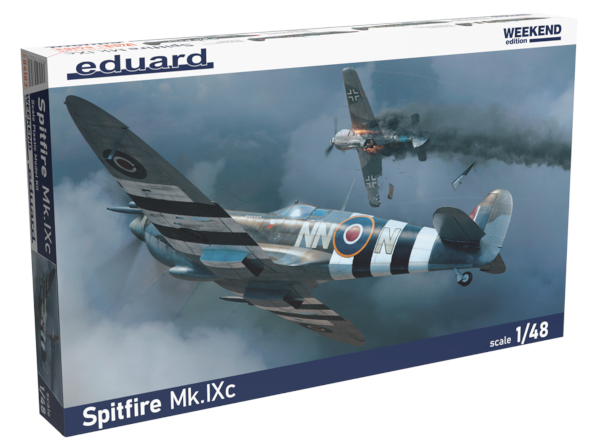 Eduard's Mk.IX is back, reissued as a Weekend edition with the 'C' wing. It consists of 219 injection molded parts, molded in gray and clear on 5 sprues. 55 of the parts are destined for your spares box. These parts include the broad chord rudder, enlarged pointed wingtips, and "late" elevators with enlarged mass balances. The surface detail is excellent, and the mulit piece cockpit will look convincingly busy with a Sutton seat harness and careful detail painting. The surface detail consists of recessed panel lines, ribvets and Dzus fasteners where appropriate.

The kit includes 4 different decal options. All 4 were painted in the standard RAF European Theatre colors of Ocean Gray and Dark Green over Medum Sea Gray:

"NN-N", MJ291, F/O Otto Smik, No. 310 (Czechoslovak) Squadron, RAF Appledram, West Sussex, UK 1944. This Mk.IXc had Invasion stripes on the fuselage and wings and a Sky spinner. The ailerons retained the upper surface camouflage and interrupted the Invasion stripes.

"WZ-GJ", Maj. Garth B. Jared, CO of 309th FS, 31st FG, 12th Pomigliano/Castel Volturno base, Italy, 1943/1944. Jared's Spitfire had a red spinner and wing bands inboard of the wing tips. It also had the unit emblem on the port nose, 2 victory markings plus the names and titles of his crew. The plane also carried Jared's initials as codes.

The decals are very well printed, in register, and have accurate colors, and there is a separate sheet of stencils.

The instructions are well illustrated and include a parts map, stencil placement guide and color callouts for GSI Creos (Gunze) and Mission Models paints.

I am glad to see Eduard's Spitfire Mk.IXc back on the hobby shop shelves. It's a excellent kit. Many manufacturers tried and failed to get the proportions and dimensions of the Merlin powered Mk.VIII and IX correct (among them Occidental, Hasegawa, ICM) but Eduard nailed it with their Merlin powered Spitfire series. It's accurate and well detailed plus you have numerous Eduard's aftermarket accessories (Brassin resin, masks, photo-etch) to choose from. I recommend Eduard's Mk.IXc and I would like to thank Eduard for the review sample.

Spitfire in action, Aircraft No.39, by Jerry Scutts, Squadron/Signal Publications, 1980