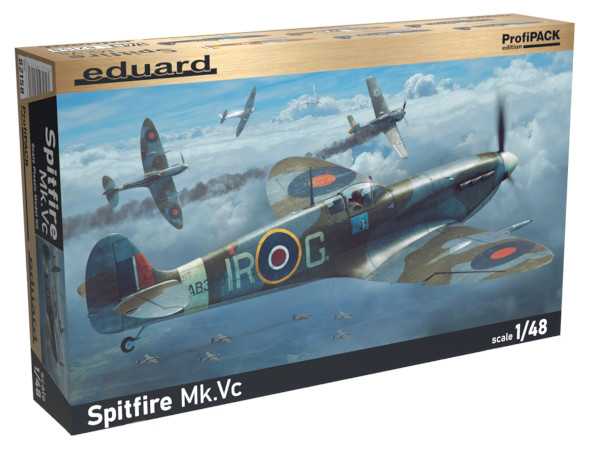 The Spitfire Mk.Vc was a further refinement of the Mk.Vb, the most produced Spitfire variant. The Mk. Vc had a reinforced wing allowing for the heavier weaponry of 4 20mm cannon. However this armament degraded the aircraft's performance and most Mk.Vcs had the same 4 .303 machine guns and 2 20mm cannon of the Mk.Vc. CBAF (Castle Bromwich Aircraft Factory) produced 3,003 Mk.Vbs and 1,474 Mk.Vcs and Westland delivered 140 Mk.Vb and 495 Mk.Vc aircraft.

You get 266 parts in the box. 228 of them are plastic on 7 sprues. There are 37 parts on a single photo-etch fret, plus a small sheet of rice paper masks. The surface detail of the wings and fuselage consists of delicate recessed panel lines and rivets along with raised elements like Dzus fasteners on the cowling. This detail is superbly executed and will look stunning with thinly applied paint and panel line washes.

The cockpit is a major focal point of this kit. It is a complex assembly and you can use the instrument panel decal or opt for the PE "sandwich". You can choose from 2 different gunsight lenses, rectangular or oval. The PE fret also includes the seat harness, rudder pedal straps, throttle quadrant, etc.

The wheel wells are deep and convincingly busy. The landing gear, gear doors and main wheels look good, too. The upper and lower wings are especially praiseworthy, with great looking panel lines and rivets of varying patterns. The elusive Spitfire lower "gull wing" is well depicted.

EF736, GR II/33 "Savoie", Dijon, France, September 1944. This Mk.Vc had the clipped wingtips and was painted Middlestone and Dark Earth over Azure Blue with a Red spinner. This plane had French roundels, yellow fin and mid span ID bands on the wings and a Red/White/Blue rudder.

"JM*T", AR560, W/Cdr John M. Thompson, 4th FS, Luqa Malta, January – May 1943. This Spitfire was repainted on Malta in the Maltese Theatre colors of Field Gray and Olive Green over Azure Blue with a Red spinner. The aircraft codes were also Azure Blue.

There are 2 decal sheets, one for the the 7 decal options and one for the airframe stencils. The instructions are well illustrated with a logical assembly sequence. Color callouts are for GSI Creos (Gunze) Aqeous and Mr. Color and Mission Models paints. This is a first class product!

Eduard's Spitfire Mk.Vc is the first 1/48th scale mainstream injection molded kit of this important variant. It is accurate and well detailed. With the ProfiPACK edition everything you need to build a contest winner is right in the box. If that's not enough detail, you have a wide variety of Eduard photo-etch and Brassin aftermarket to choose from. I recommend this kit and I would like to thank Eduard for the review sample.

Spitfire in Action, Aircraft No.39, by Jerry Scutts, Squadron/Signal Publications, 1980