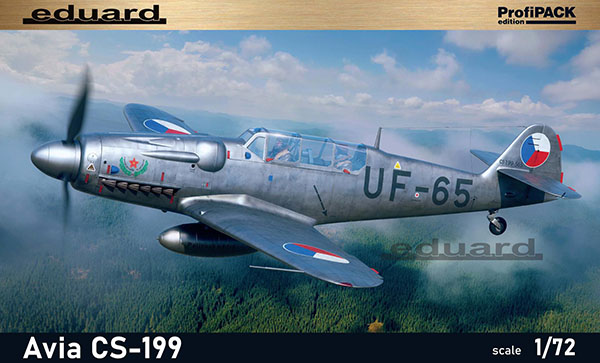 The challenges of flying the Bf 109 (and its post-war Czech equivalent, the S-199) led to the development of a two-seat trainer, both in the original Luftwaffe and in the Czechoslovak Air Force. By adding a second cockpit behind the original, an instructor could fly with the student and take over when needed, hopefully avoiding the loss of an airframe. In practice, though, the CS-199 still saw its fair share of accidents as the skinny wheel base coupled with the high torque of the hefty propeller made the plane a challenge to fly. With over 80 CS-199 trainers built, though, the type was able to stay in service for many years.

With Eduard’s S-199 kits out (and truly a joy to build, as seen here), I was fully expecting to see another reboxing of those single-seater versions. What a surprise to see that the two-seat CS-199 was next, though, as this is a type that is both very interesting and very under-represented in kit form. Unsurprisingly, this kit shares quite a few parts with those single seater editions, with the wing sprue and detail bits sprue being identical to those S-199 releases. The new fuselage comes on its own sprue that also includes the two-seater cockpit pieces. Additionally, a new clear sprue provides options for both open and closed canopies.

Jumping into the construction, this follows the process of the single seaters pretty much verbatim, with just needing to adopt almost twice the amount of work in the interior for the second spot. As this is a ProfiPACK release, you get the excellent pre-painted photoetch that will spruce up the insides quite nicely. These details include seat belts, rudder pedals, instrument panels, and side console details. My personal favorite that I found with the single seaters, though, is the multi-colored trim handle. That stands out quite a bit in the finished cockpit and adds a great splash of color.

The rest of the build follows the single seaters pretty closely. You assemble the wings first, then flex them slightly to fit around the assembled fuselage. Separate slats, flaps, and ailerons, along with the radiators and wheel well inserts round out the wing assembly. Tailplanes have separate elevators and rudder, and the landing gear has that well engineered mounting lug seen in the S-199. A separate cowling top section, options for the cowling bulges, a separate three-part side scoop, and a separate cowling underside round out the major assembly.

The canopy is done in an innovative way, with a single universal windscreen and two options for the opening section. If you want to display the model with a closed canopy, you get a single clear piece for that, while for the open option, you get a single piece for that as well with both the front and rear canopy pieces already stacked in place. Having these as two options made a great difference on my S-199 build, where I used the closed canopy option for the blown hood as a cockpit mask, tacking it in place before painting. I fully plan on doing the same here, as that method worked perfectly and I didn’t have to worry about masking off the open cockpit at all.

For color schemes, don’t expect any interesting camouflage schemes for this one. All the CS-199s were painted aluminum (not natural metal, so don’t do multi-colored panels, either). There are six options covered in the decal sheet, all of which have some small interesting details. The first one is UF-65 from 1951 and it has an emblem on the nose consisting of oak leaves and a red star. The second option is UL-56 from 1952 and it features yellow bands around the rear fuselage and mid-wing. The third option is UF-84, also from 1952, and it has much broader yellow bands on the fuselage and wings, but only on the upper surfaces (the fuselage band goes halfway down the fuselage side).

Option number four is NH-25 is another one from 1952 and it is the first option to feature Czech roundels trimmed in blue instead of white. It carries no yellow bands or other emblems. The fifth option is from 1951 and is of an aircraft that really highlighted the challenges of the plane. It carries nothing more than a hand-drawn 305 on the fuselage side as it suffered an engine failure on takeoff of its delivery flight from Central Aviation Storage and thus never entered service. The last option also has a crudely painted number (80) on its fuselage side, but it was with the Aerospace Research Center. It is also the second option to have blue-outlined roundels.

This is a very welcome companion kit to the Eduard single seater S-199s and I am looking forward to building it up, especially after the positive experience with the single seater kits. My thanks to Eduard for the review sample.